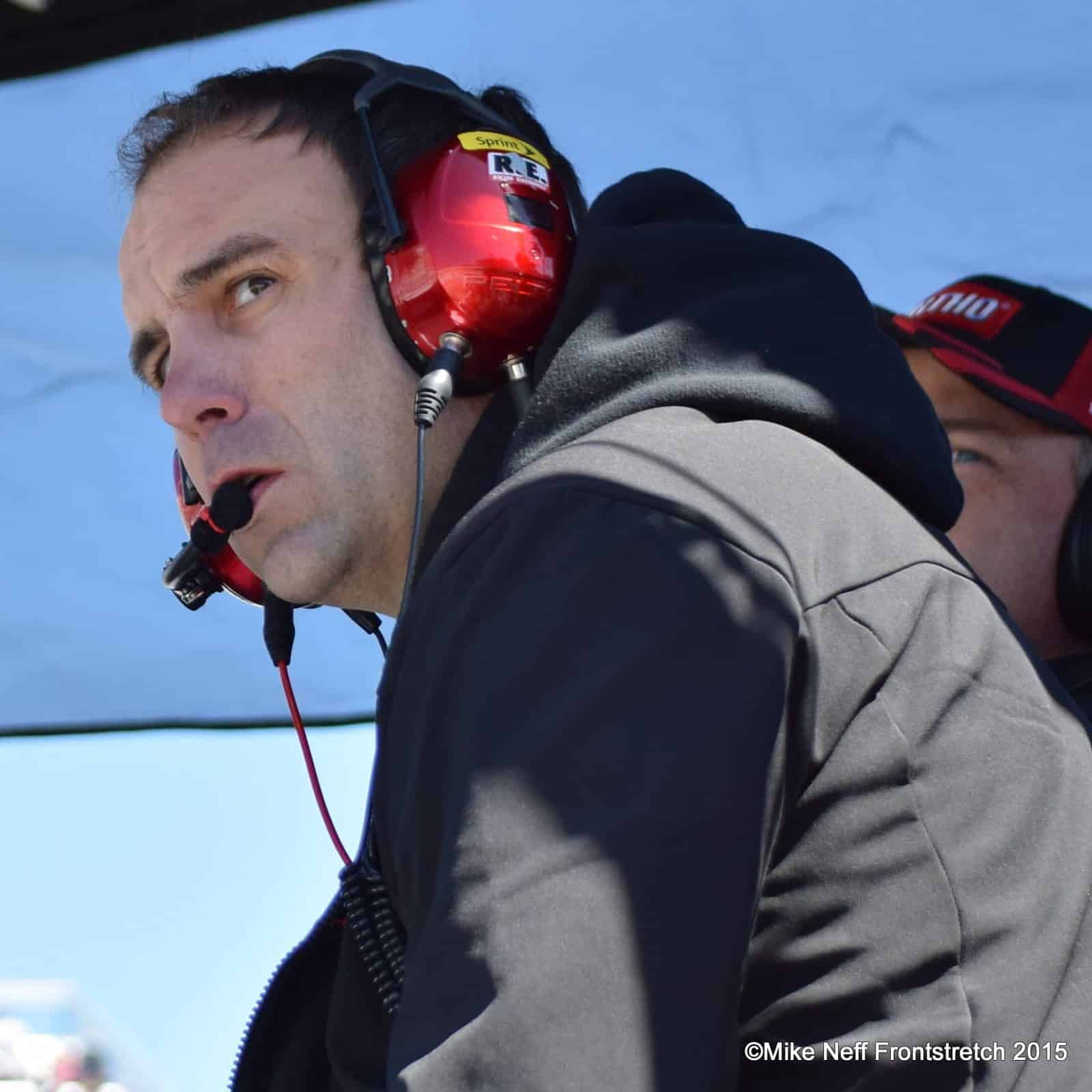 Greg Biffle‘s first career Cup victory took place at Daytona in 2003 in a restrictor-plate race, while his best finish at Talladega was last spring. Matt Puccia, his crew chief, is rather excited about going to the longest track on the schedule this weekend, and after a difficult outing at Richmond he is hoping to turn the team’s fortunes around at Talladega.

In this week’s Tech Talk, Puccia discusses working with teammates, restricting air from coming into the front of the car and wind blowing across the racetrack. He also touches on the latest iteration of cars coming out of the Roush Fenway Racing shops and the new qualifying procedures at Talladega. He and his driver are hoping to do it one step better at ‘Dega this year.

Mike Neff, Frontstretch – Coming out of Richmond, it didn’t work out like you had hoped. You ended up two laps down in 21st place. What happened during your weekend in the Commonwealth?

Matt Puccia – Ultimately, at the end of the day, it was our qualifying effort that hindered us. We had a really fast car in final practice and ended up second quick. We just weren’t able to back it up in qualifying. We ended up with a bad qualifying spot and at the end of that day that is what hurt us. Early in the race we didn’t have a great car, the kind of car that we needed to get up and run at the front. We were set up and planning on racing at night. We were on the tighter side and planned to tighten it up a little more for Saturday night. We ended up racing on Sunday so we fought being too tight to start the race. The last third of the race we had a good car but the unfortunate part of it was that we were two laps down by that time. We raced with guys in the top five and top 10 and we ran the same speeds as the guys in the top 10 late in the race. Unfortunately we were in the back there and couldn’t make it up. Cautions didn’t fall the way we needed them to in order to get the wave around or the Lucky Dog and that was how our way ended.

Neff – You mention that you were tighter than anticipated because you were planning on running at night. Most of the time the heat of the day makes you looser rather than tighter. Why do you feel like your car was so tight?

Puccia – One of the things everybody fights is tight at Richmond. It is something you can deal with a little better. If you are loose in and loose off, it is a handful and you can’t fix that. It ends up making for a challenging night. Going into Saturday night, with the cooler temperatures and figuring we were going to race during the night we thought we’d be quite a bit freer. Judging from practicing during the day and qualifying at night we ended up being too free in qualifying. We knew that we were going to be freer in for the race and we adjusted for it a little bit. Started the race on Sunday with warmer temperatures and we were tighter. Kind of thought, going into the race, we were going to fight tight. Until we got that stuff backed out of the car and got it freed up, that is what we fought.

Neff – A month ago, when you were last in Tech Talk, you mentioned that you had built some new cars with things you’d learned from the new rules package. After the Easter break you rolled them out. How do you feel like the new version for Roush Fenway is working out?

Puccia – It is a step in the right direction. Everyone is always looking for the smoking gun to take you to winning races every week. The realistic view is that it isn’t going to happen. The positive that came out of it, for sure, is it was a step in the right direction. It is what we need and we need more of it. We’ve been working really hard and you’re going to see another step of that come Kansas and Charlotte. I’d say Charlotte will be another generation of the car. We’re looking forward to that. Just getting there fast enough, where we need to be quick enough, is a challenge. It is all part of what we do.

Neff – We’re headed off to Talladega and we are monkeying around with the rules for qualifying again. We are doing a modified European technique. Do you feel like this will be more like the old single-car days or will having more than one car on the track give you a tow off of the other cars?

Puccia – I don’t think you’ll be able to get a tow off of them. NASCAR has made an emphatic point about not allowing any shenanigans like that where you can get a tow. I really don’t see it being an issue or factor. I could be wrong on that but the one thing they did do is cut it down to one lap. That is going to be something where you will have to adjust the way you set the car up and approach qualifying like we did last year with single-car stuff at Daytona. It brings a little bit more of a challenge but I like that it is back in the crew chief’s hands to build the fastest car you can for a superspeedway. I like it. I think it is great. You hold your breath through qualifying the way we had it earlier this year. You saw some of the issues we had earlier in the year with cars being torn up. It lets you see what you have for speed in your car.

Neff – Last fall a Ford was a winner at Talladega. Do you feel like the Fords and especially the Roush teammates are going to be able to work together?

Puccia – I hope so. You definitely need some friends to be able to go out there and do your business. That has been a topic in a lot of our meetings going into Talladega. We’ve had a very strong speedway program over the years and especially the last two years where we can go out and do our business. We need to capitalize on that, all work together, and go down there and get the best finish we can get.

Puccia – Very, very minimal. Little stuff being tweaked but nothing that is going to change the drivability of the cars. It is the same rules package that we’ve had the last couple of years and it seems to be working pretty good for that right now. It is good NASCAR has identified that and left it alone to allow us to not focus attention on the speedway program because it isn’t changing. We can focus on the areas that we are really weak in where we need to work. I like that it is the same and I’m looking forward to getting down to Talladega this weekend.

Neff – You may not have an answer for this but just wondering: with the reduction of grandstands at a handful of the tracks lately, have you noticed if the cars react differently on the back straight now that they’ve taken the super-stretch stands down?

Neff – Just didn’t know if having the seats gone allowed the wind to go across the back straight differently and might upset the handling of the cars.

Puccia – Not really; the biggest place you’d see that is qualifying. Just the way it affects how you catch the wind with single-car qualifying. In the pack you just aren’t going to see a difference. Daytona is always big. You want the wind to blow from the turn 2 side. The grandstands will block the wind coming down the front straight and you won’t have a head wing. However you’ll have a tail wind going down the back straight. You get the best of both worlds with that. That would be the only place where you might see it is qualifying with how it affects the car.

Neff – We’ve seen a few different iterations of people putting cooking oil and other substances on their bumpers to try and avoid cars getting out of shape when they bump in the pack. What is the rule at this point about what you can put on your bumpers to attempt to avoid catastrophe from contact at an unwanted angle?

Puccia – NASCAR has not said we can’t do tandem drafting in our series. They’ve restricted it in the other series but it is still free game for us. The problem with that is our cars don’t do that very well. The bumpers don’t line up well with the way the grill bezels are and the rear bumpers. It doesn’t really affect us. What NASCAR did say is they don’t want to see the grease or Pam or other tomfoolery that people were doing. They do allow us to put a tape or film over the front and rear bumpers but that is the only thing we are allowed to do. Even with that on the cars it doesn’t allow us to push and beat and bang on each other like we could do with the old car.

Neff – You use very little in the way of brakes at Talladega. Do you have any openings on the front of the car, other than the radiator opening, to allow any kind of air through for cooling purposes?

Puccia – No, we don’t on our car right now. Brakes are not an issue. You are on the floorboard all of the way around with the throttle. You may see some guys trail brake a little bit just to avoid getting out of the gas. If you get out of the gas you are really going to lose some ground. Guys will trail brake a little bit but even with that there is plenty of cooling just in the systems we run for braking to get them cooled back down. There is no need for extra cooling ducts going to the brakes. You will see some teams running a little two- or three-inch duct to get air to their alternator. Some teams are doing that but we are pretty sealed up. The least amount of air you can let through the front of that car, especially at a speedway, the faster you are going to go. You are searching for every square inch or square centimeter of opening that you can close off to make the car get through the air better. You definitely don’t want to open it up to let air to the brakes or anything else if you don’t need it.