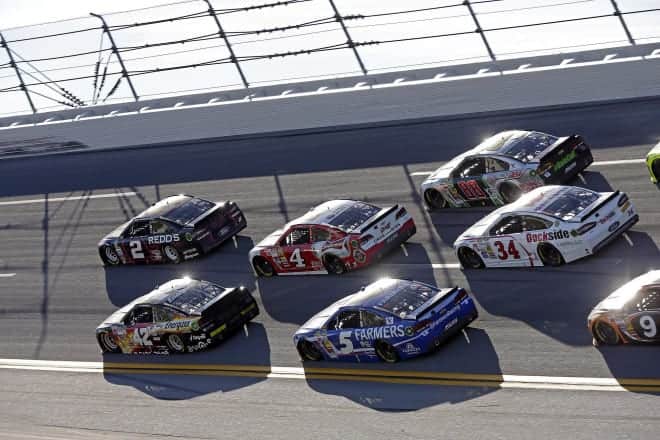 2012 was the last time a Roush Fenway Racing car earned a victory at Talladega Superspeedway. Last year, one of its three drivers, Ricky Stenhouse Jr., missed the fall event at the track to due NASCAR’s erratic qualifying method.

However, entering the sport’s largest track this season, Stenhouse is determined to contend for a victory. In Friday’s first practice session, he drove the No. 17 car to the top of the charts at 200.780 mph in the midst of a large pack. Following Stenhouse’s top speed, teammate Greg Biffle was quickest in final practice at Talladega on Friday afternoon at 197.929 mph in a condensed pack of cars.

During the first session, Stenhouse edged out Michael Waltrip, who is running a special helmet this weekend in memory of the late Steve Byrnes. Waltrip is piloting the No. 55 Toyota for the second time this season, and David Ragan will take over the car starting next weekend at Kansas Speedway. Ragan held the fastest 10 consecutive-lap average during the early session, and was inside the top 10 in both practices on Friday.

Chris Buescher, Denny Hamlin and Ragan rounded out the top five in the morning session. Tony Stewart was 17 hundredths of a second slower than Biffle in Happy Hour, which put him in second. Stewart has one win at Talladega, which came in his final start at the track for Joe Gibbs Racing in 2008. Since 2012, his best finish at the 2.66-mile track is 22nd.

Aric Almirola, Jimmie Johnson and Austin Dillon completed the top five in Happy Hour. Only seven cars ran at least 10 consecutive laps, with Biffle posting the quickest average speed of 195.312 mph in the pack. In the second session, most teams focused on mock qualifying runs, which consisted of single-car laps with NASCAR’s new rule change for qualifying this weekend.