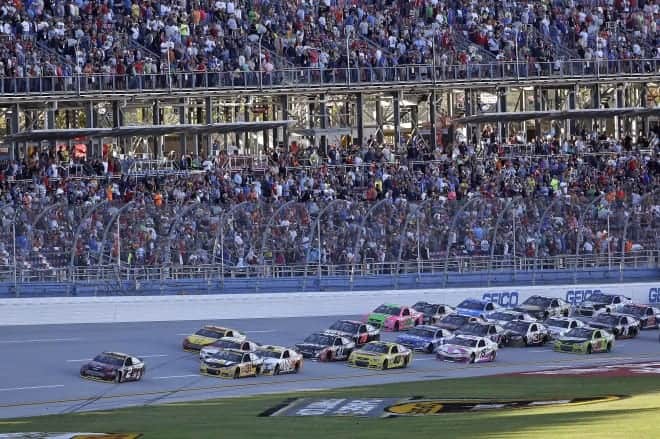 They say it’s only a matter of time until the Big One hits at Talladega Superspeedway.

On lap 45 of Sunday’s GEICO 500, a small aero-loose scenario between Trevor Bayne and Kurt Busch sparked a massive accident on the backstretch, swallowing up 14 drivers.

“When the [No.] 27 went around us on the top there it’s just going to pull you around almost every time,” said Bayne who was the first car to lose control. “Now I see that Kurt [Busch] is pretty close to our left rear so that’s double trouble. When you get the air moving around here in these high speeds, it’s as much as physically hitting each other.”

Bayne was unfortunately not the only Roush Fenway Racing driver involved as both teammates of Ricky Stenhouse Jr. and Greg Biffle spun and received damage.

“I didn’t see a whole lot,” Larson told FOX. “I saw the [No.] 6 get sideways in front of me, I don’t know if somebody got into him or not or he just got the air taken off him. From there, [I] tried to miss the wrecks and thought I was gong to clear it all and then the [No.] 40 started coming up the track.”

The red flag was immediately waved to halt the race for more than 11 minutes and clean the mess on the ‘Alabama Gang Superstretch.’

“I was on the outside so I couldn’t really see what was gong on,” Kahne said while still sitting in his No. 5 Chevrolet in the garage. “I saw them trying to ditch the [No.] 6 for awhile on the inside, middle wherever he was at.”

The accident was the second on-track incident of the day following a blown motor by Brian Scott collecting Michael Waltrip on lap 18.