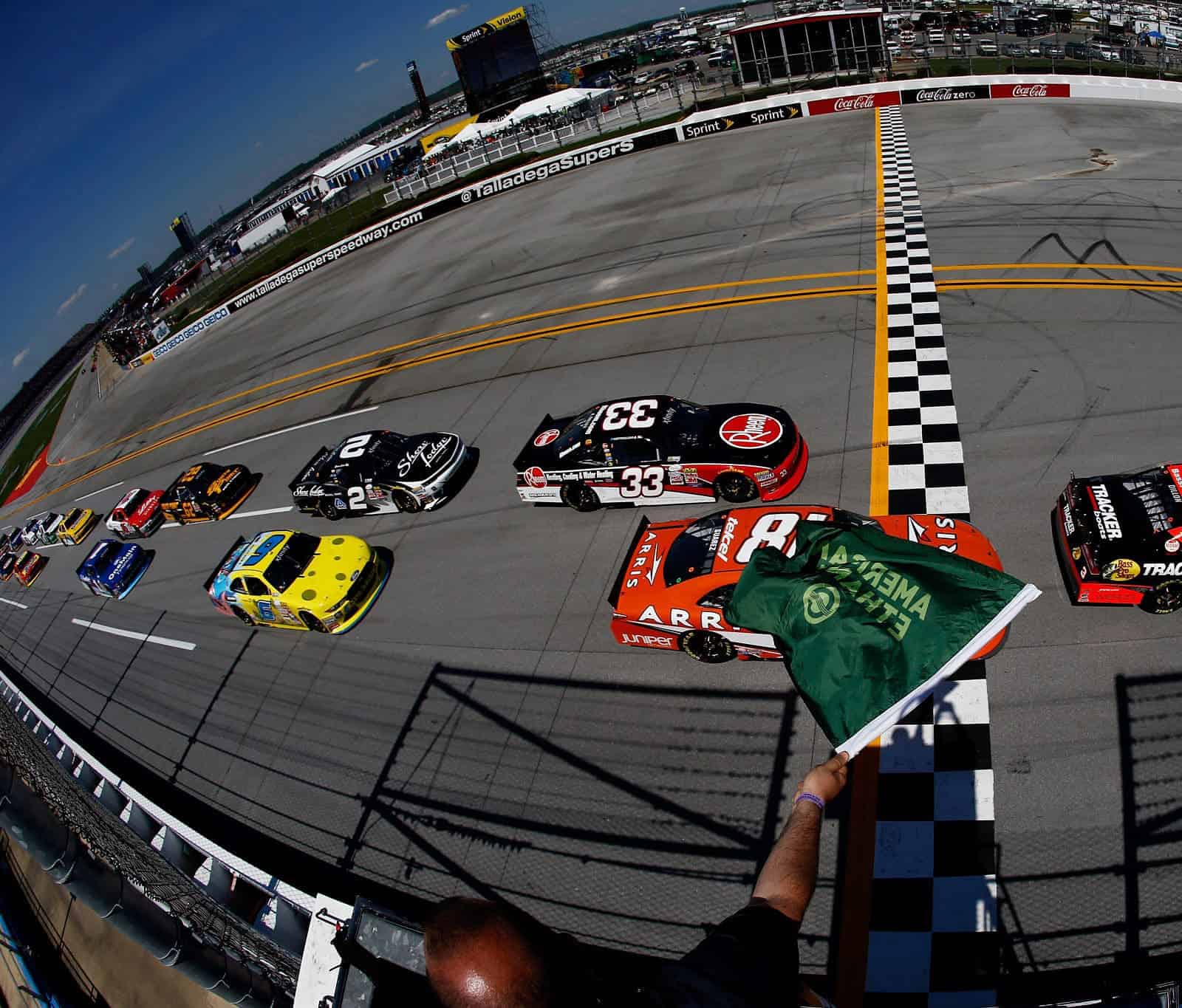 Sprint Cup Series: Jr. Wins But… – The easy aspect of the race at Talladega is that Dale Earnhardt Jr. won which is ostensibly good for the sport because of his continued popularity.

The question, however, that slipped by with his victory is whether or not the racing was any good. If you’re a fan of Earnhardt (and please, muzzle DW and his June-bug blather), then you’re probably happy and see nothing wrong with how things went down. If you’re a fan of racing, it’s a different story, because the follow-the-leader racing that took over the late stage of the race didn’t seem to make for a compelling event.

In a way, the last 20 laps managed to look like Formula 1 races, where the car out front has all the advantage and there’s not much that anyone else can do. Restrictor-plate racing has usually brought a feeling that anything can happen towards the end but for this one, it felt like the last chapter had been written before the checkered flag waved. No one could make a move to gain any ground and the inside lane proved to be nothing but an afterthought. It’s strange for a track that has created so many interesting endings. – Huston Ladner

Xfinity Series: Fast, Wild and Shocking at Talladega – In a race that was supposed to give the Xfinity Series regulars an opportunity to come home with a victory, Joey Logano simply said: not today (like in the Dikembe Mutombo GEICO commercials). Leading 40 of the 113 laps on Saturday afternoon, he took his Team Penske Ford to Victory Lane for the third time this year.

However, the underdogs did have a key role in the 300-mile event. Joey Gase had an impressive run in the No. 52 car for Jimmy Means – giving the team its first ever top-10 result. His solid day included missing multiple wrecks, and working his way through the pack within the final two laps. Meanwhile, JJ Yeley, who is running full-time in both the Xfinity Series and Cup Series, finished fourth for JGL Racing, which is a rather underfunded team. Yeley continues to outperform those who he is racing around, and is slowly reeling in the top 10 on a consistent basis.

As for the championship battle, Ty Dillon leads Chris Buescher by nine markers. The two leaders are driving away from the rest of the field, with Chase Elliott and Darrell Wallace Jr. 37 points behind in third place. However, Elliott Sadler showed plenty on muscle at Talladega, leading six times for a total of 19 laps. Sadler is still seventh in the standings, but is slowly gaining momentum. Brian Scott also had a fantastic day at Talladega, and nearly edged out Logano (and would have done so if there was another lap). As the series heads into an off-weekend followed by a stand-alone race at Iowa, the pressure is on the Xfinity Series regulars, who can get a top five run to prove they have what it takes to be a champion. – Joseph Wolkin

Short Tracks: The Race of Champions Asphalt Modified Tour opened up their 2015 season at Chemung Speedrome (N.Y.). Defending champion Chuck Hossfeld picked up where he left off in 2014, but did not have the best car in the field on this Sunday afternoon.

Hossfeld took advantage of mechanical woes late in the race by both front-row starters and frontrunners Jimmy Zacharias and Andy Jankowiak. The lead became Hossfeld’s when Jankowiak slipped in turn 2 with only a handful of laps remaining.

Zacharias, a four-time defending track champion at the 3/8-mile, looked to be on his way to an emotional victory. Fellow racer, crew member and family friend Matt Clemens passed away a week ago and the Candor, New York driver was racing in his memory. Unfortunately, the motor in his modified would not make it the distance.

Sports Cars: Compass360 Racing Bucks The Trend – In past editions of Pace Laps, we’ve reported on multiple teams leaving the TUDOR United SportsCar Championship in favor of Pirelli World Challenge. Such defections have cut the GT-Daytona class substantially from last year. However, one team announced a new entry in the class on Friday.

Compass360 Racing, a team that competes in both the IMSA Continental Tire SportsCar Challenge (CTSC) and Pirelli World Challenge’s TCA class, announced on Friday that they have acquired an Audi R8 LMS and plan to compete in the GT-Daytona class with current CTSC GS drivers Ray Mason and Pierre Kleinubing. Sponsorship will be provided by AERO Advanced Paint Technology, Spyder Apparel and Audi Sport Customer Racing. In addition, the No. 76 Audi R8 LMS will carry the logo of the Children’s Tumor Foundation.

At the present time, the team has only officially committed to four sprint races, starting with Lime Rock Park in July. They also plan on racing at Road America, Virginia International Raceway and Circuit of the Americas. The press release issued by the Ontario-based team indicates a “strong likelihood” of racing in the Sahlen’s Six Hours at the Glen in June and at Petit Le Mans in October. Regardless, the team already has their R8 LMS and a vigorous testing program will commence in two weeks at Sonoma Raceway.

Team owner (and sometimes racer) Karl Thomson is very excited about the new territory that his team is entering.

“We’re incredibly excited to extend our Audi program with what is undeniably a big move for our team,” Thomson said Friday at Mazda Raceway Laguna Seca. “Over the past few years, we’ve expanded from ST to GS, and we feel that the time is right for us to make the jump to GTD. We’ve enjoyed working with the folks at Audi Genuine Parts and Accessories on the S3 [the replacement for the team’s former Honda Civic Sis in the CTSC’s ST class], which is still a work in progress, and we’re grateful for the opportunity to run an Audi R8 LMS for Ray and Pierre.”

Kleinubing is a multiple-time champion in multiple divisions, most recently in the CTSC’s ST-class in 2012 with i-Moto Racing. Prior to that, Kleinubing won Touring Car titles with RealTime Racing in what is now Pirelli World Challenge. Mason is a long-time veteran with Compass360 Racing that has some experience in the former Rolex Series. – Phil Allaway