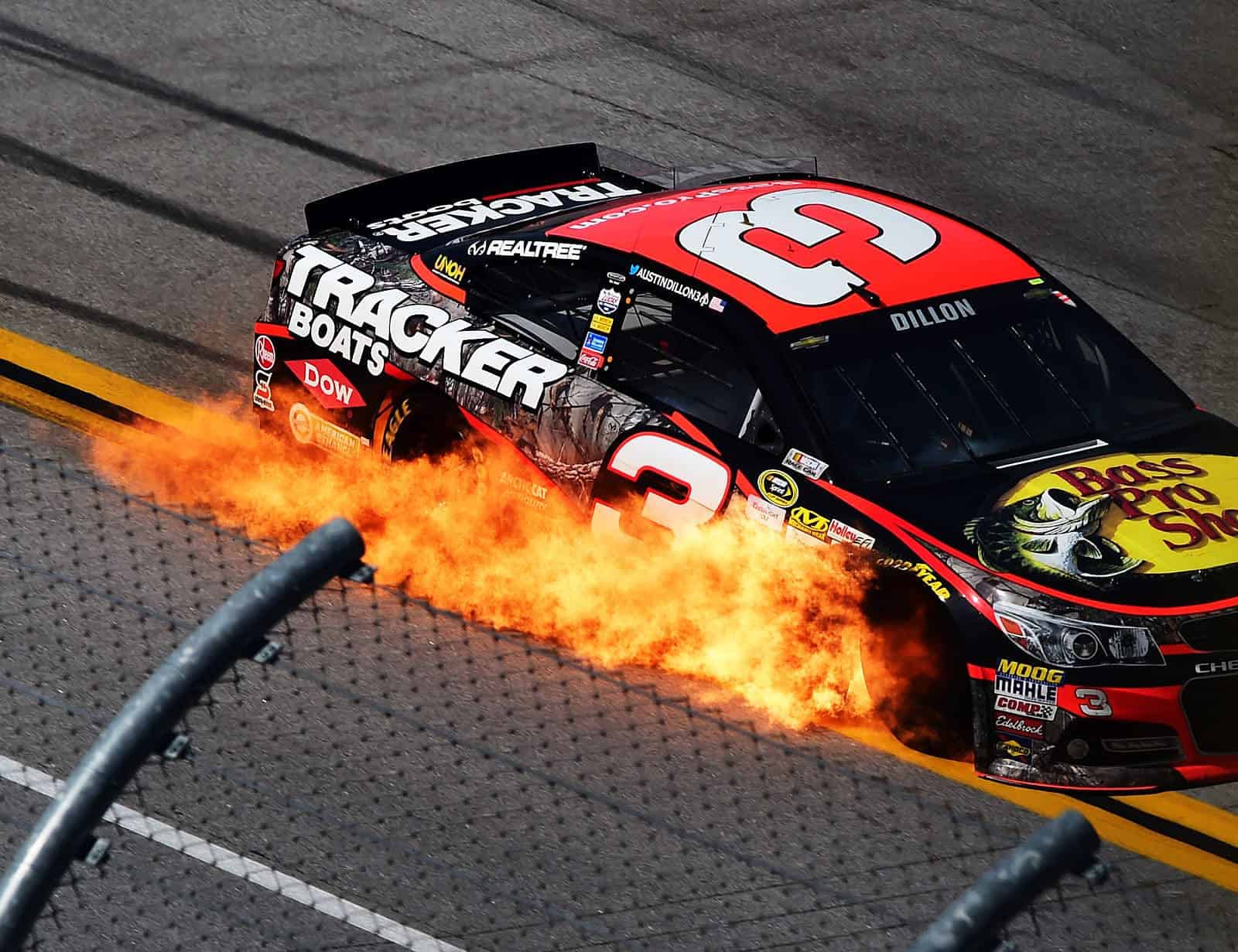 Pit road is a hazardous place, there’s no denying it. Cars slam on their brakes, reducing speed from 150 mph and up to the requisite or so in a matter of feet. Tires slip and bumpers compete for space as everybody attempts to pull into their assigned spots. Jackmen and tire changers dare fate by leaping in front of their team’s car and hope that everything happens as it should.

99% of the time it all works out. In under a minute, the entire field comes down the road for service and resumes their places on the track, everybody having filled up tanks and changed four tires. The over-the-wall gang wheels in their hydraulic lines, checks tire pressure and shakes off the adrenaline rush so they can prepare for the next go-round.

But sometimes it all goes sideways. For two weeks in a row, Brendan Gaughan’s No. 62 XFinity machine has been at the center of some pretty wild accidents on pit road; ones that resulted in injuries to pit crew members. What went wrong, you might wonder, with so many safety precautions built into the cars and servicing procedures?

Last week at Richmond, it was just one of those things. A spark ignited spilled fuel in the No. 62’s pit box. Rear tire changer Anthony O’ Brien and gas man Josh Whittman both received a face full of flame and fire retardant as they were extinguished by safety crews in an instant.  However, what was really terrifying was how the flames flashed over the wall in and into the pit box area. Eric McClure‘s crew member Clifford Turner got caught on the edge of it. All the crew members had on the appropriate clothing for such an instance, but it did make me pause…what would have happened to a lucky fan who scored hot passes for the day? I put the thought at the back of my mind for the week.

Until  Gaughan was caught up in the lap 73 Big One of the Talladega XFinity race on Saturday. The South Point Chevy was out of shape trying to miss the worst of the mess, attempted to gain control as it slid down pit lane. The impact with the wall was not what you would think was devastating, but a tire was launched behind the wall and into a couple crew members. Both went to the infield care center, one went to the hospital. The one who was transported was the pit sign holder. He was not required to wear a helmet as he is not expected to go over the wall. Yes, he suffered head injuries.

I understand the danger that a member of the pit crew accepts as part of the team during a NASCAR event. I appreciate that NASCAR has required fire suits and helmets for the entire over-the-wall gang and all of its officials–and it enforces the standard. The gasman for the Sprint Cup No. 51 team was sent home on Sunday when he was found handling a gas can behind pit wall without a helmet and head sock. Otherwise, the teams stick to the closed-toe shoes, long pants and shoulders covered dress code for everyone not part of the pit crew. It simply makes sense.

The fans who are welcome to wander behind the pit boxes and stand in unoccupied pits next to the wall during competition, well they can wear just about anything they want. Sandals, shorts, tank tops—it’s all good. Which is comfortable on a hot summer day, but what happens when that lug nut goes shooting off like a bullet? Or a pile of oil that is spilled accidentally? Or even if a tire sitting on the wall waiting for a pit stop is hit by a careening machine and launched into the crowd.

I suppose everybody has the chance to turn down the opportunity to stand next to those who have signed on to work in a dangerous job, but what dyed-in-the-wool NASCAR fan actually would decide they’d rather sit in the stands than next to their hero’s pit team?

These past two weeks haven’t so much highlighted how the present safety measures work for the team members as reminded us this is a dangerous sport, for more than just the driver. The fans are given access to areas of the garage that in the real world just wouldn’t happen. OSHA would be handing out helmets with orange tape and steel-toed shoes just for the pre-race tours.

Ultimately it is our choice to sign on the dotted line when we accept that Hot Pass. The fine print speaks of the chance of injury and death. They aren’t kidding. There is the risk and reward to be considered…it’s a tough one. I’ve signed the contract a few times. I’ve loved every second of the day wallowing in the smells and sounds of unhinged automotive racing. Would I still feel the same way if a tire took me out in a freak crash? Good question. Very good question. I don’t know.

When all is said and done, when packing for your day at the track, just remember that you and your cooler do not have the same gear on as the crews. They’ve got an inch up on you when Brendan Gaughan comes calling. Stay safe my friends. Stay low.

I figure now would be a good time for Jeff Gordon to secure his spot in the 2015 Chase, much like he did last year.

Other thoughts about Kansas…it’s a strange place, despite its cookie cutter reputation.  I shall never get over the 2007 race where Greg Biffle won, even though he ran out of gas under yellow and didn’t cross the finish line first. If something odd occurs this week, just know that we are in Kansas.

And people used to mock the ESPN pit reporters for wearing fire suits during race coverage. Now they know why.

When Cal Wells had his Tide team wear helmets over the wall on pit road fifteen years ago, a number of fans, broadcasters and competitors were lampooning them. Not long after a head injury on pit road (UPS crew?), it’s suddenly mandatory and of course it was NASCAR’s idea all along.

And there are still not safer barriers everywhere………