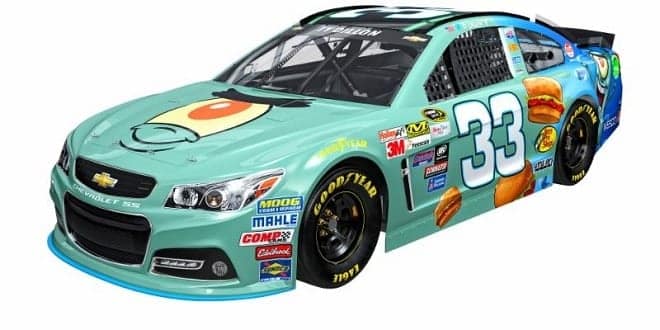 If you have never watched the show, Plankton is a microbe that is always trying to steal the Krabby Patty secret recipe. Plankton also runs his own restaurant on the show, called The Chum Bucket.

“I grew up watching episodes of SpongeBob SquarePants on Nickelodeon, so you can imagine it’s pretty cool to have Plankton on our Chevrolet SS,” Dillon said in a team press release. “The NASCAR community is fortunate to have such a great partner in Nickelodeon for this weekend and to utilize our sport in its activation plans. Nickelodeon is all about kids and having fun and I look forward to having some fun with the Nickelodeon characters and their guests at the racetrack this weekend.”

Dillon will be one of the five different drivers who will sport a SpongeBob SquarePants car. The others include Greg Biffle, Michael McDowell, Casey Mears and David Ragan.

Dillon will be making his fourth career NASCAR Sprint Cup Series start on Saturday. The 23-year old driver continues to search for his first career top-10 finish in the series. His best finish came in his debut last season at the Atlanta Motor Speedway in 25th. In the Xfinity Series, Dillon leaves the Talladega Superspeedway with the series points lead.