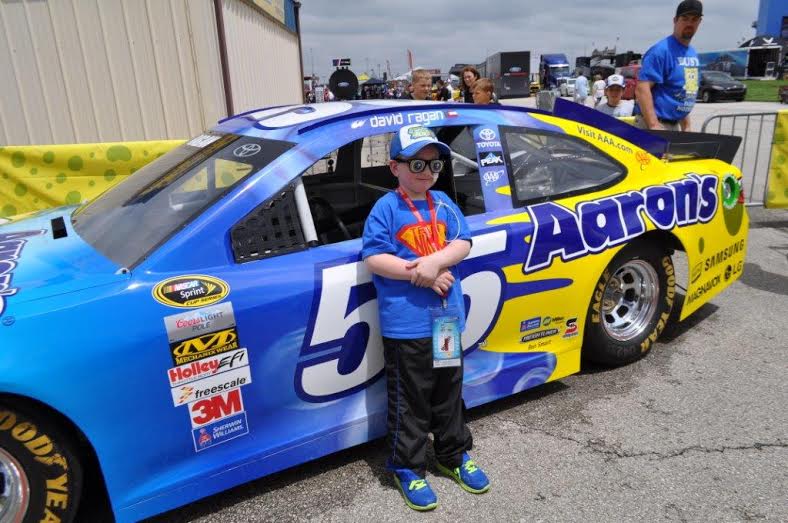 There seems to be some mixed opinions on the name of this weekend’s NASCAR Sprint Cup Series race: the SpongeBob SquarePants 400. Kansas Speedway bears the name of a popular sponge who lives in a pineapple under the sea, promoting the upcoming film The SpongeBob Movie: Sponge Out of Water.

Some fans thinks it’s corny and ridiculous to name a serious points race during the season after a kid-centered television show. Others find it whimsical, fun, and a great way to reach out to a younger fan base.

Regardless of your opinion, there is no doubt that the unique name of the race generated quite a bit of attention for this weekend’s event, especially amongst a very non-racing centered crowd. Because of this, the track drew a couple of special guests to the weekend’s events — people who may not have been there otherwise.

One such special character was eight-year-old Nick Oudin, a little boy with a disease known as DIPG (Diffuse Intrinsic Pontine Glioma). DIPG affects a part of the brainstem called the “pons,” meaning basic nervous system functions such as chewing and swallowing become impossible. This disease primarily affects children and is one of the most resistant towards chemotherapy treatment amongst all types of cancer. Potentially, the disease could be a lifelong ordeal for Nick.

Despite living with a very difficult illness, Nick enjoys some of the same things as many other little boys, and it was the name of Saturday night’s race that brought him to the racetrack.

You may assume that since Nick loves the show so much, he might be cheering for Ragan, right?

Actually, no. Nick’s favorite character on the show is Patrick!

“I want Patrick to win!” he said several times.

Though Nick had been to a race before, and had been to the dirt track Lakeside Speedway many times prior, he had never had the full experience of being in the infield and so close to the cars, and seeing the SpongeBob sponsored cars was one of the most exciting parts!

Nick was joined by parents Charles Oudin and Lisa Messick along with brother Austin Messick.

It seems a few members of Bikini Bottom themselves joined the at-track events over the weekend.

Or, rather, at least their voice actors.

Rodger Bumpass, the voice of Squidward Tentacles, was also part of the weekend’s festivities. Of course, he had a special place in his heart for the No. 13 of Mears.

“We’ve got Casey, and I met him,” said Bumpass. “…It’s going to be great seeing the characters on all the cars!”

SpongeBob SquarePants has been on the air on 1999, the longest running show on Nickelodeon to date.

I say the new low in NASCAR this week wasn’t from Castle Daytona, but the so called “fans”. How in the hell can you have this many complaints about a race sponsor? In this day and age, thank your lucky stars there is someone willing to sponsor any race at all! I thought it was great and good fun. Loved it, when David Ragan spun out on the logo itself, the 55 car looked identical to the infield. Lighten up complainers, much more relevant ills in NASCAR than a Sponge named Bob sponsoring the race! Imo of course.