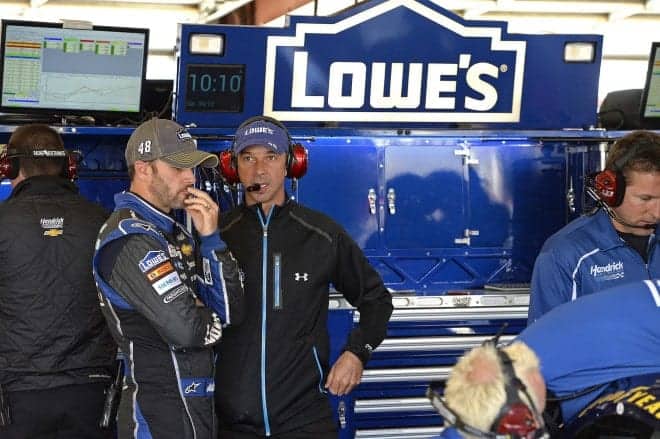 For much of the Spongebob Squarepants 400 at Kansas Speedway, it looked as if the race would be decided between Kevin Harvick, Martin Truex Jr. and Kyle Larson. However, after a nearly 2.5-hour rain delay, a late-race caution and a gutsy call, Jimmie Johnson drove his way to victory lane for the third time at Kansas and third time in 2015.

Johnson’s 73rd career Sprint Cup victory early Sunday morning did not come easy. Earlier when the race started, Johnson nearly spun around and collected his teammate Dale Earnhardt Jr. who finished third. During the red flag for rain on lap 97, Johnson on Twitter credited his previous dirt track racing experience for the save. When the ninth and final caution came out with 12 laps remaining, Johnson, Earnhardt Jr., Kurt Busch and Jeff Gordon stayed out, while Truex Jr., Harvick and the remaining cars on the lead lap pitted for fuel and tires. Johnson held on for the victory with Harvick coming in second, making it the 12th time that Johnson and Harvick have finished 1-2 in a race.

Talladega winner Earnhardt Jr. finished third and Gordon rebounded from a disappointing result last week to finish fourth. Joey Logano, who was first penalized for having his gas man go over the wall too soon before the red flag, then penalized for pitting when pit lane was closed with 80 laps to go, rebounded to finish fifth.

Matt Kenseth, who finished sixth, was the bright spot in an otherwise abysmal night for Joe Gibbs Racing. Erik Jones, making his Sprint Cup debut in the No. 18 car, crashed in turn 4 on lap 195. Immediately following that incident, Denny Hamlin cut down a tire after contact with Earnhardt, then wrecked down the frontstretch on lap 209. Carl Edwards made an unscheduled pitstop on lap 228 with a vibration. Jones, Hamlin and Edwards finished 40th, 41st and 20th respectively.

Brad Keselowski and Busch finished seventh and eighth. Truex Jr., who led 95 laps, the most in the field, finished a disappointing ninth and Ryan Newman completed the top 10.

Johnson’s 23rd career 1.5-mile racetrack victory jumps him to top of the Chase grid. Harvick continues to lead the overall points standings, with Truex in second. Paul Menard, Newman and Clint Bowyer remain as the last three drivers currently in the Chase grid based on points.

The Sprint Cup Series goes all-star racing next Saturday night with the Sprint Showdown on Friday, and the Sprint All-Star Race on Saturday. The next official event for the series is the annual Memorial Day classic, the Coca-Cola 600.

Wow, a Jimmie Johnson win on a Dull D. That must have been the ultimate reward for sticking with a rain delay. So glad Kansas was not on my own schedule.

That’s what I expected but I DVRed it anyway only so I would have something to do between loads of laundry. Keep in mind that this is coming from Mr. Negative. It was pretty entertaining with racing everywhere on the track, actual passing, and a minimum of yellow flag race manipulation. With the FF button for the commercials and endless rain delay and the mute button to keep the Waltrips and Larry McShill quiet I thoroughly enjoyed it. Who saw that coming?

I know this sounds crazy to even post what I am going to post…given Jimmie Johnsons wins, which I respect cause they are a win..I am completely dumbfounded as to how it is possible, I can’t recall any moves that I can say were stellar, engaged, spectacular, edgy, bold or a wonder. He complains whenever he is “raced”. It seems like he has rocket fuel and those pesky skills of maneuverability don’t matter, his car is fast and his “skills” don’t matter, he just runs up thru the field. I know I will get crap for it but all these years, I don’t see it, in the way of him actually “racing” a competitor. And I could care less about him a driver, he just baffles me with a “ah o.k, he won” and I turn the TV off.

I totally agree. If Johnson won the race it wasn’t worth watching.

I’m glad it was worth the time, JohnQ. Doesn’t make me wish I had done the same though.