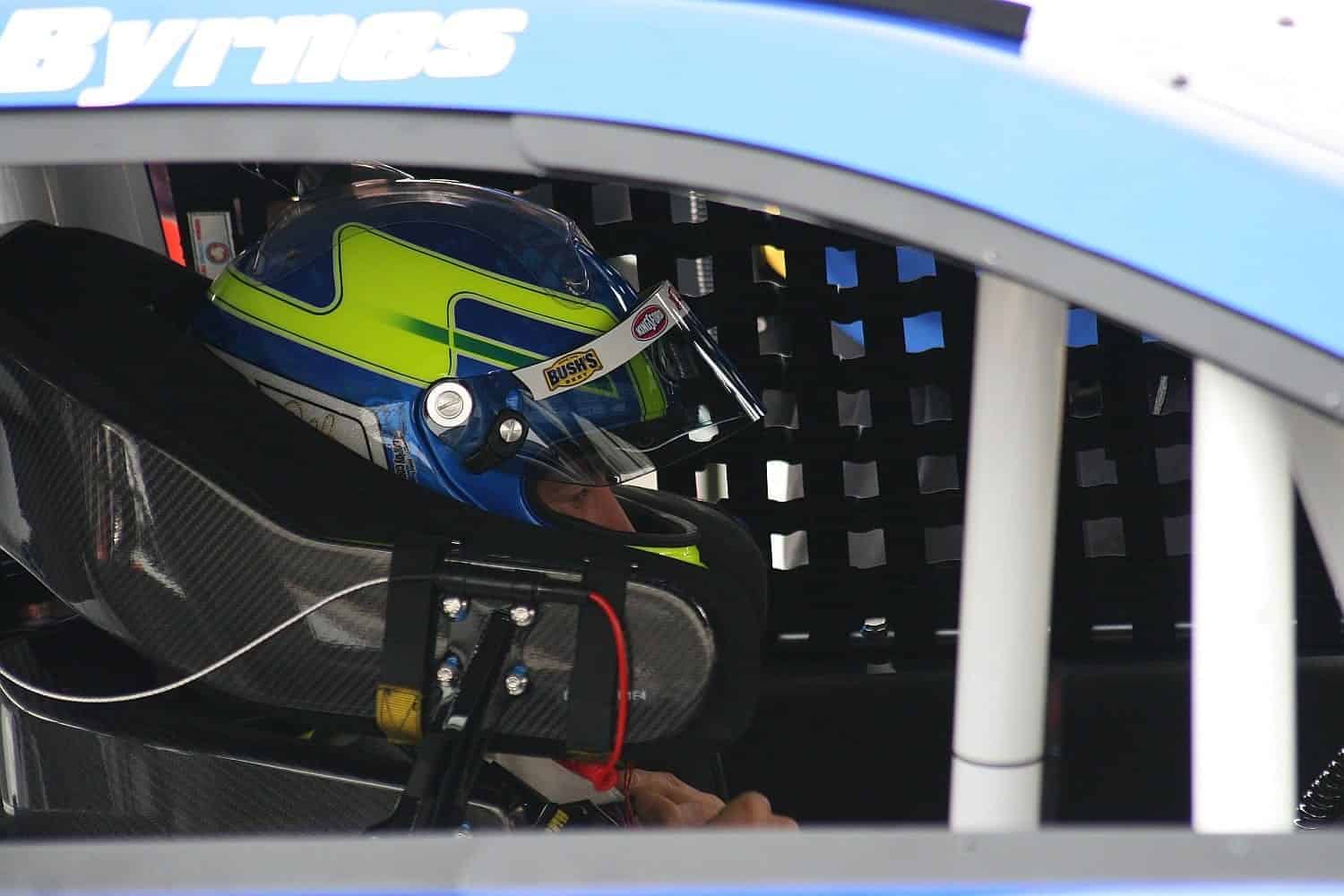 Truex’s win is just around the corner

It wasn’t to be for Martin Truex Jr. on Saturday night under the lights at Kansas Speedway, but if his performance tells us anything it is that his win is just around the corner. And what a celebration it will be when it finally does come. Truex has been stuck on two career wins for some time now and outside of himself, his family, friends, supporters and team, it’s fair to say that no one expected that elusive third win to come this season (except perhaps in the wild-card plate events). In the end, 95 laps lead and a strong performance all day wasn’t enough with the metronomic Jimmie Johnson recording his 73rd career victory and his 23rd on the mile-and-a-half circuits. (Side note: the win also marked Johnson’s 200th top-five and 300th top-10 finish in 482 races – a ridiculously impressive effort however you slice it.)

All told, the ninth-place finish is Truex’s 10th top 10 in 11 races – good enough for second in the overall points standings. And with the half-way to the Chase point almost reached, Truex is in a great spot to make the playoffs on points – providing, of course, we don’t have more than 16 winners, which seems unlikely. Like I say, the win is coming, it’s just a matter of when.

I’ll be away on vacation for the next couple weeks, and with that in mind it would be remiss of me not to mention the upcoming greatest day in motorsports – namely Memorial Day Sunday. This epic day of racing encapsulates three of the biggest races on the global motorsports calendar: the Formula 1 Grand Prix of Monaco is first up, followed by the 99th running of the Indy 500 before we round off the day in style with NASCAR’s longest event, the Coca-Cola 600.

For the racing aficionados, it’s a red-letter kind of day and one, if you’re not careful, can see you cemented to your couch for almost half a day of race viewing. Although we are primarily a NASCAR site here at Frontstretch, we also produce some excellent content on both F1 and the Verizon IndyCar Series, so you can read all about the build-up to Memorial Day Sunday over the next week and half. For me, the most compelling of the three races is the Indy 500, also billed as the “Greatest Spectacle in Racing.” Now that’s a lofty claim, on one level, but it is a moniker to which the race more often than not lives up to as 34 drivers navigate 200 laps of arguably the most famous track in the world – the Indianapolis Motor Speedway. Enjoy the day, folks. In racing terms, it doesn’t get much better.

For the next couple of weeks, with the All-Star Race and the Coca-Cola 600 both being held at Charlotte Motor Speedway, the vast majority of drivers and teams will be able to have a much needed stretch of time at home base; the Colorado-based Furniture Row team being the honorable exception. For a series where travel is at a relentless pace, this relatively short period of not having to pick up and haul to tracks across the length and breadth of the United States is certainly a blessing. Families of the hard-working team-members will also be able to attend both events and see their loved ones at work in their home environment making this next couple weeks just that little bit more special.

It is also a fantastic opportunity for teams to have more staff members at the track, not just those folk that typically travel around the circuit each week, and that in turn can create great learnings especially on an all-important cookie-cutter circuit. Of course that works both ways too, with the teams that are already strong able to get that bit stronger too. The next time we return to Charlotte Motor Speedway after these two races will be midway through the Chase. So there’s no time like the present to have a good few weeks at NASCAR’s home track.

Two weeks ago, I watched the Talladega Superspeedway race with a great friend of mine. Now, this friend has loved NASCAR for many years, and in the time we’ve been friends, NASCAR has been one of our main shared passions. We’ve watched countless races together and spent far too many hours in happy conversation on the subject of mashing the gas and turning left. In the past couple seasons, this friend of mine has become increasingly disillusioned with the sport and in particular the playoff system. When the rules changed again last year setting up the “final four” showdown at Homestead-Miami Speedway he was especially vociferous. He told me that 2014 would be the last season he would watch every race.

To be honest, I dismissed his complaints as nothing more than hot air. But when we sat down to watch Talladega he told me that outside of the Daytona 500 this was the first 2015 race he had watched in full. His ever-reliable wife confirmed this was indeed that case. So why do I mention it? Well, this is someone who loved NASCAR with a huge and enduring passion. But the system and the changes have infuriated him so much he literally can’t bear to watch anymore. I wonder how many others are like him and indeed some of the commenters on my columns are certainly in that number. Either way, it’s a sign of the times for NASCAR and even more reason why they need to make every effort they possibly can to attract a younger, more connected fanbase.

And finally this week, Saturday night’s 14th-place finish at Kansas Speedway for AJ Allmendinger was a creditable effort. But the real story for the No. 47 wheelman came earlier that day during media availability with JTG Daugherty Racing announcing that Allmendinger had signed a five-year extension to his driver contract. It’s a huge vote of confidence for Allmendinger, who has found a true home at JTG Daugherty and, importantly, one where he can continue to grow and develop. “I have always said I have a verbal lifetime contract with JTG Daugherty Racing…” said Allmendinger “It’s pretty cool to me because I love it here and love the family atmosphere Jodi [Geschickter], Tad [Geschickter] and Brad [Daugherty] have established. Not only do we have a family bond, we have a healthy future with some of the biggest and best brands in the business.” And after something of a stop-start career so far at the Cup level, Allmendinger has the chance to truly establish himself with the security of strong team backing behind him. He should be fun to watch – especially on the road courses later this summer.

The All-Star race didn’t always exist. It isn’t needed, honestly. The week OFF would be a far better approach.

If that isn’t to be, then the race should rotate among several tracks–say Atlanta, Chicago, Kansas, and, perhaps, Charlotte.

The ballyhoo’ed “much needed time at home” means little to anyone outside of the industry–such great sacrifice pales in comparison to those who serve in uniform–I’ve been there, away from home for 6 months & more at a stretch, so don’t try to suggest it HAS to be in Charlotte for the families to re-bond. The current “arrangement” keeping the All-Star races in Charlotte is very self-serving, and it denies many other fans a chance to see such a spectacle….but in the end, I don’t see why there is an “all-star” event, when practically everyone with any name recognition or is going to get to race–to me, it lacks any real exclusivity. The format leaves a full field, but it should eliminate cars at each segment to narrow the field down to just a few, like a Trophy Dash on a short track.

Why does NASCAR now more than ever need to reach out to a new fanbase? What is wrong with diehards like us who stuck with NASCAR thru thick and thin? We are not, despite what the detractors say “pining for the old days”, if one person can tell me this aero package is competitive, that big teams are not in bed with BZF and “The Chase” is the best thing to happen to motorsports, then maybe you are the people Brian deserves.

NASCAR has done the same thing to the all-star race that they have to the championship. Watered it down by including so many unworthy participants that it’s lost the whole concept of “all-star”.

Still, it’s something to watch on Saturday night. It’s relatively laid back from a viewer standpoint because it has no bearing on the season. I kind of just watch it passively. The adrenaline just isn’t there.

Being a retired sales engineer, I am reminded of the old saying that IT TAKES A LOT MORE EFFORT TO FIND A NEW CUSTOMER THAN TO MAINTAIN AN OLD CUSTOMER, Through my years of sales I found this statement to be TRUE. Why in the hell can’t nascar understand this fact? I’m another ex nascar fan that now only watch a few races.

Danny, This is a surprise to you? Where have you been? Everybody but fan deaf NASCAR and its spinning press knows that fans are more alienated with the constant gimmicks and silly rule changes with every passing year. Ask yourself, when was the last time you saw anybody anywhere with a NASCAR tee shirt? I am the only person I know that still watches. Brian couldn’t get rid of us any faster if he came to our homes and insulted our mamas.

Martin Truex Jr. is most definitely going to win one here soon, he certainly has the equipment to do so and the team is firing on all cylinders. I’m mighty proud of my hometown team and the strides they’ve made since getting into the sport with my old high school mate Jerry Robertson at the wheel years ago. My question though is why can’t they seem to land sponsorship for this team. I see Dr. Pepper on Yeley’s car every other week and wonder why sponsors aren’t falling over themselves to meet with Barney Visser since he made it known he was looking for sponsors, especially Colorado companies that have national exposure. I just don’t get it. Someone please enlighten me…

I heard that they had a big paying sponsor lined up but NASCAR nixed it because they didn’t think it fit the family image they want to project…. “Colorado Cannabis”. :)

Maybe they could get Smoke to drive it. LOL

Haha, one of the first places I thought of as well… i also thought of Chipotle and Coors. All quiet here in Denver though.