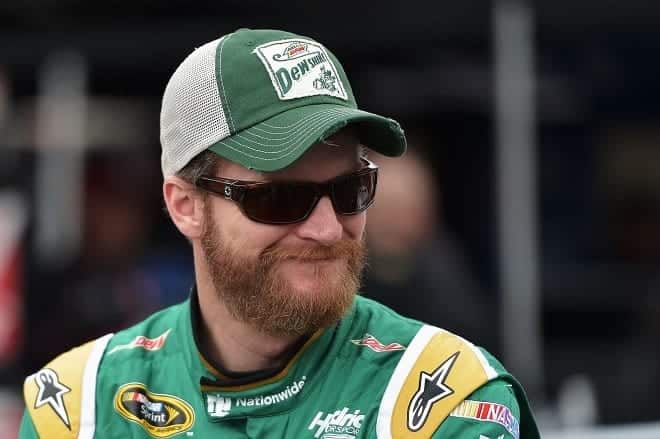 Dale Earnhardt Jr. has numerous starts – and victories – in both the NASCAR Xfinity and Sprint Cup series. However, the 40-year-old veteran still has not run in one of the sport’s other top three divisions, Camping World Trucks.

This year, JR Motorsports announced a NASCAR Camping World Truck Series team that will compete in only 10 races throughout the 2015 calendar. The goal is for Cole Custer to gain more experience, prepping to run for the series championship once he turns 18.

Note that the driving roster doesn’t include the sport’s Most Popular Driver. For a time, rumors persisted Earnhardt would make a spot start in his self-owned Chevrolet but those have now officially been shot down. Earnhardt said during a press conference Friday morning that he would more than likely not make his NASCAR Camping World Truck Series debut this season. The North Carolina native also mentioned that if he did make the jump, Martinsville Speedway would be the place.

“I love Martinsville,” he explained after breaking the news. “Watched the Truck race there this year in the pit stall and just wanted to be out there. It just looks like a lot of fun. Of course, we always enjoy that track.”

The owner of JR Motorsports is also quite excited for Kasey Kahne’s start Friday, driving his truck at Charlotte Motor Speedway. Kahne has five career starts in the series with four victories. His last start came back in 2012 at Rockingham Speedway.

“Kasey [Kahne] has a hell of a track record in the Trucks,” Earnhardt continued. “I think he is going to put a lot of pressure on himself. I’m not going to put any expectations on him. I just want him to have fun.”

Earnhardt also hopes Kahne can bring some expert knowledge with him to the No. 00 Chevrolet team. With a veteran driver behind the wheel, he hopes it will be beneficial to Custer as he goes into his other races.

“I think it is going to be well prepared. Those Trucks have been real fast everywhere they have been. We will see how it goes.  I think he is going to enjoy it and help that team, especially being at the racetrack,” said Earnhardt. “As difficult as it is on Cole [Custer] to not be at the track and racing every opportunity he can get, it’s also as difficult for the team to sort of stay competitive and stay on the leading edge of the innovating things that are happening in the garage if you are not there every week.”

The veteran Sprint Cup Series racer looks to help the young driver Custer wherever he can. Earnhardt is a huge believer that the more races they run, the better off they will be as they will always be evolving.

Custer has 10 career starts in the NASCAR Camping World Truck Series since his debut last season. The 17-year-old driver has one victory, two top five and six top-10 finishes in the series. He became the youngest in series history to capture a win last year, snagging the trophy at New Hampshire Motor Speedway.