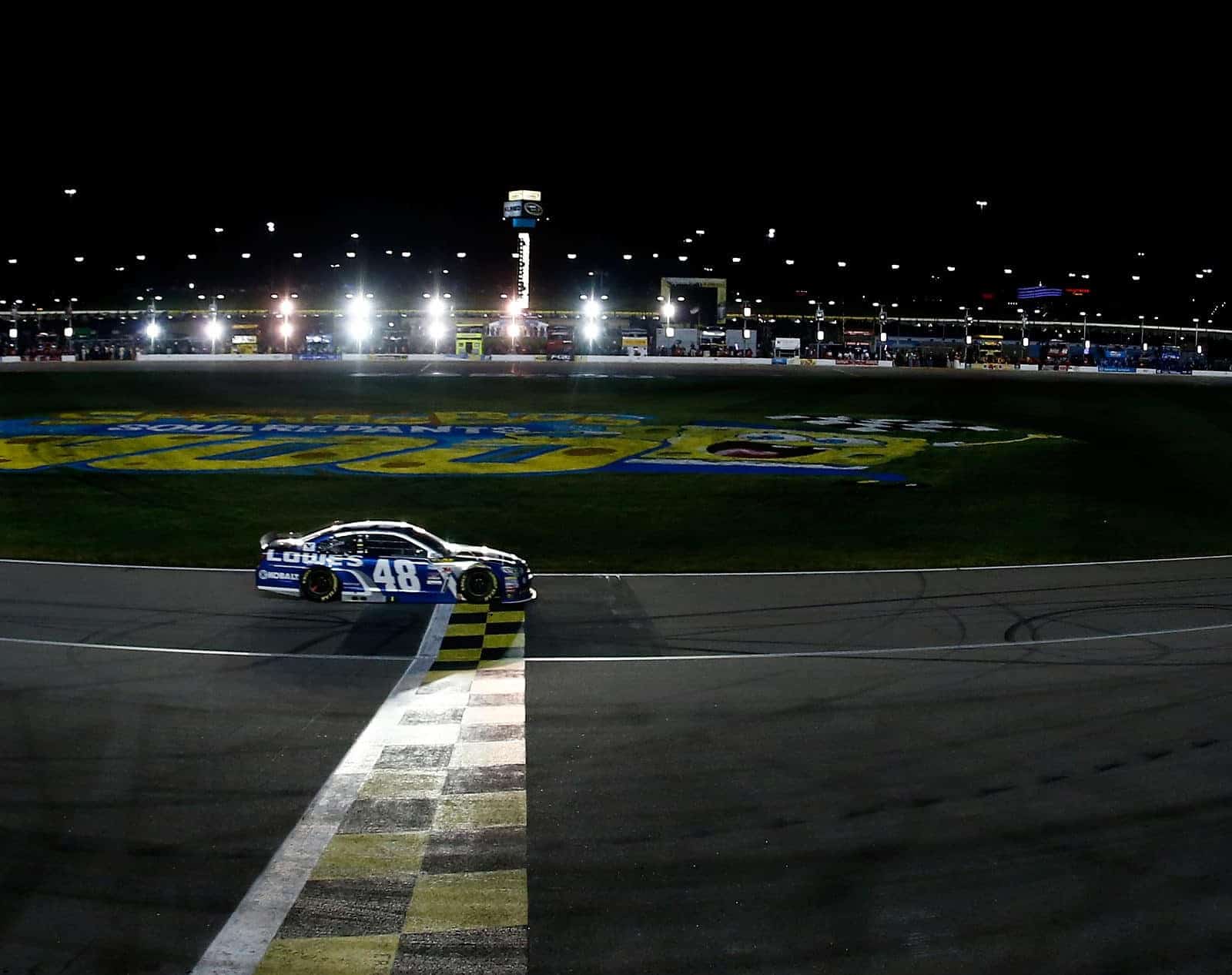 You know how to tell when a NASCAR team is suddenly hot? Here’s the formula: Drop to the back of the pack due to an early-race incident. Then gradually work your way toward the front. Then, when what turns out to be the final caution comes out, instead of pitting with the other leaders, you inherit the lead and then, on old tires, hold off the hottest driver in the series, who is on new tires, for the final seven laps on a 1.5-mile track. That’s the way it worked out for Jimmie Johnson, crew chief Chad Knaus and the No. 48 team late Saturday night (err, make that early Sunday morning) on the way to the team’s third win of the season. Now, there are a couple of things that came into play on that decision. It wasn’t just a simple “stay out and hope it works” type of thing. With Johnson and Knaus having been together for Johnson’s whole Sprint Cup career, they’ve been through that scenario a few times before (at least). Also, Johnson’s experience probably allowed him to take care of his tires a little better in the final part of the race, which was also helped by the fact that he and many others were probably in fuel saving mode before the caution came out. Put all those things together, and you have what was a calculated gamble that paid off in the best way for the Hendrick Motorsports team.

Yes, let’s not forget about the driver who could have easily won at Kansas, Kevin Harvick. He has eight top-five finishes in the 11 races so far this season, including two wins. He also has two other top-10 finishes. Here are some other impressive numbers for Harvick this season: he has an average running place of 5.73. No other driver is in single digits. He has led 1,006 laps this season. The next closest is teammate Kurt Busch at 541. And Harvick has run the run the fastest lap 20.3% of the time this season, or 574 times. The next closest is Kurt Busch at 9.2%. Sure, Harvick and the No. 4 team are probably getting a little itchy to visit victory lane again sometime soon. But if they are not winning, don’t expect them to be too far behind.

OK, and yes, let’s give shout out to any of the fans who stayed up to watch the end of the race that finally came to a conclusion (thanks to a two hour and 16 minute rain delay) at about 1:10 a.m. eastern time Sunday. Yes, I admit to dozing off on the couch a time or two, but luckily returned to consciousness for about the final 100 laps.

Finally, there are usually some interesting paint schemes in each race, but when you’ve got a race that includes SpongeBob, Patrick Star, Squidward and Plankton in it, well, that’s just hard to top.

For much of Saturday night/Sunday morning, it looked like Martin Truex Jr. was going to win his first race of the season. And if he had, it would have been no fluke. Truex Jr. has been good all season, also with 10 top-10 finishes in 11 races this season. He also led a race-high 95 laps in this one. However, on the final restart Truex, who had fresh tires, got caught behind Busch, who was on old tires. Busch got off to a slow restart and that left Truex trapped on the bottom line with nowhere to go. So even though he finished ninth, Truex was, not surprisingly, upset with that finish. He knows he could have won, and it’s tough to not end up in victory lane when you know who easily could have.

Even though they lost 50 points due to a penalty for messing with tires (to put it in layman’s terms), you still have to give the No. 31 team and Ryan Newman credit for coming to the track and racing hard every week. Newman is now up to 13th in the points standings and would be in the Chase if it started this week. I’m not saying the No. 31 team shouldn’t have been penalized (getting caught messing with the tires is one of the few definite lines that NASCAR has in its rules), but I am saying that you have to give Newman and the team some credit for not giving up after the penalty came down. He nearly won the Chase last year without a win, and who knows, if he keeps that consistency again, he could make the final four at Homestead again.

Some things are fascinating, more and more each week. Yes, the No. 43 car driven by Aric Almirola is still in the Chase at the moment, sitting 11th in points and is just one point out of 10th place. What’s so remarkable about this is that Almirola has been largely unremarkable this season. First, he is the only driver in the top 25 in points who does not have a top-10 finish this season. That’s a bit of statement on mediocrity there, but there is also more when you take a closer look at the numbers. He has run just 32.7 of his laps in the top 15 this season. The next lowest number among drivers in the top 16 in points this season is Clint Bowyer, who is 16th, at 49.3%. Also, he has run the fastest lap on the track just 11 times this season, tied for 34th best with Tony Stewart (yes, that Tony Stewart, who is 30th in points). The one thing he has managed to do though, is stay on the lead lap. He has run 90.70% of his laps on the lead lap, good for sixth best on the circuit. It may seem obvious, but that tells us a lot about the importance of staying on the lead lap.

It just may be at the point of the season where Kyle Larson has to wonder what is going on. Larson had a quality car at Kansas, and was in the top 10 much of the night, and even found his way into the top five for a while there, But that late restart cost him as well and he ended up with a 15th-place finish instead of what could have been somewhere around a fifth-place finish.

Stewart is back in his regular spot here. Smoke seemed to have a respectable car and was running as high as seventh early on. But then he slid back and then got caught a lap down due to unlucky timing of a pit stop. He got the Lucky Dog to get back on the lead lap and with fresh tires and looked ready to at least make some progress from 33rd position. But then, when he slowed to avoid an accident, he got rear-ended into the wall by Brett Moffitt. Just another case of Stewart being the unlucky one again.

Why is Kevin Harvick in the hot “could have easily won” category? Martin T. had a race high number of laps, sorry Martin you are not the media darling “Happy”, although your personality seems 100% more deserving that that miserable SOB. Imo, of course.

….and as soon as Tony Stewart checked up and Brett M. hit him, our house was fearful as to what Tony was going to say and do..and he showed his displeasure..AGAIN! Tis, a matter of time for a big blowup and the media will continue to coddle this unstable individual, who by all rights seems he should not be racing, but taking up Yoga somewhere with folks keeping an eye on him. Imo, of course.