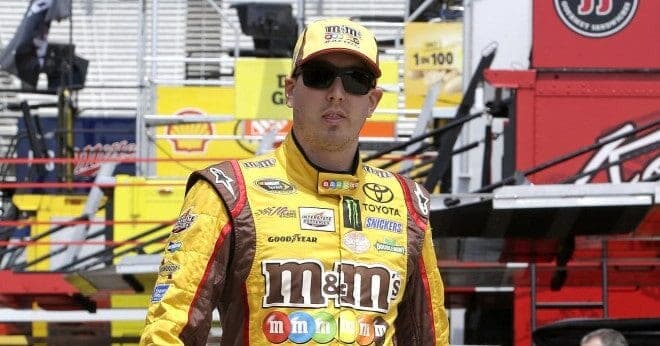 All-Star weekend has come upon us in the world of NASCAR, and the pomp and circumstance filled extravaganza that is the Sprint All-Star Race is once again packed with storylines in advance of the race.

Many different people in the industry have many different opinions on this race. Some think it is one of the most exciting nights of the season, while others think it is a pointless and overhyped pile of nonsense.

Color me somewhere in the middle of those two.

Regardless of your thoughts on the race itself, there’s little doubt that the race will have its share of stories. In what thus far is the biggest story of the season, Joe Gibbs Racing driver Kyle Busch will be making his long-awaited return to the Cup Series Saturday night after missing three months of competition due to injuries sustained at Daytona. Few have any idea as to how Busch will fare in his first foray back in the series.

…Well, scratch that. I have an idea as to how Busch will fare, and if you scroll down a bit, you can get my thoughts on that and the rest of the stories that figure to highlight the 2015 Sprint All-Star weekend.

WILL KYLE BUSCH BE HIS USUAL SELF?

Busch endured an accident at Daytona earlier this season which likely would have killed him if it had occurred just 10 short years ago. Busch’s vicious wreck sidelined him for three months, which is an unheard of amount of time for an injury-related leave of absence. The accident was the sort of crash that can make a driver rethink everything he thought he knew about auto racing.

Busch was affected by the wreck both physically and mentally; he’s made this abundantly clear in his interviews since then. So, with that in mind, what kind of Kyle Busch is going to show up to race on Saturday night? Some would assume that the Busch of old will return in full force, out to prove to all that will listen that his aggressive nature will not be subsiding just because of one bad crash.

I’m not sure I can agree with such an assessment.

For the next few months, I am quite positive that Busch’s on-track persona will be one of a more conservative variety, and I believe we will catch our first glimpse of that new persona on Saturday night in his first race back in the series. Busch has made it abundantly clear in interviews that he was gravely affected by his February accident, and typically, drivers just simply do not mentally bounce back quickly from that kind of trauma with any degree of quickness. It could be a year or more before Busch exorcises the demons that haunt him from that day.

Needless to say, I wouldn’t expect the usual Kyle Busch to show up on Saturday night.

WILL THE RACE BE ANOTHER EDITION OF THE KEVIN AND JIMMIE SHOW?

In case you haven’t noticed, the Nos. 4 and 48 teams have been in a class of their own this season. The official odds according to Topbet to win the 2015 Sprint Cup championship put Jimmie Johnson (+450 odds) and Kevin Harvick (favored at +350) in a tight race. It is abundantly clear that these two drivers are the class of the field in 2015, especially on mile-and-a-half tracks. Harvick hasn’t finished lower than second on a mile-and-a-half track in 2015, and Johnson has won three out of the four mile-and-a-half track events thus far. They are in their own league at these facilities this year, and that dominance isn’t likely to end any time soon.

Enter Charlotte, the original NASCAR mile-and-a-half track. With how strong Harvick and Johnson have been at these tracks all year long, it is hard to conceive of a scenario where the race does not come down to these two drivers duking it out for the victory.

I fully expect Johnson and Harvick to each rattle off segment wins early in the night, leading to a final showdown between the sport’s two heavyweights for the All-Star Race victory.

HOW WILL THE FORMAT AFFECT THE RACE?

For the first time in what seems like a very long time, NASCAR is, for the most part, leaving the format of the All-Star Race alone. This race has become infamous over the years for the massive, yearly format changes that would always confuse fans and media members alike.

Knowing that the result of every segment will have bearing on the lineup for the final segment, it will be interesting to see if drivers will race harder and take more chances knowing that every position in every segment counts, especially after drivers have digested the ins and outs of this format from last year’s running.

With all of this in mind, I’m predicting that the first four segments of the race will be a dogfight.

In the late 2000s, NASCAR decided that, for whatever reason, it would be smart to make the final segment of the All-Star Race a 10-lap shootout. In theory, this sounds great; one would think a 10-lap shootout would be just short enough to foster some serious excitement.

And yet, every year in recent memory, the final segment has been a dud.

Why? The answer is a simple, two-word phrase: clean air.

Clean air provides a bigger advantage at Charlotte Motor Speedway than at any other mile-and-a-half track due to how grippy and narrow the track’s surface is. The groove is narrow, and drivers don’t have anywhere to get out of dirty air. When this happens, it takes a faster driver nearly double the amount of time to pass a slower car in front of him. This is why the 10-lap shootout has been iffy in recent years.

Luckily, NASCAR has made small gains on the clean air issues every year for the past few years, and there is optimism throughout the garage that clean air won’t be as big of an advantage this weekend as it usually is at Charlotte. But of course, only time will tell.