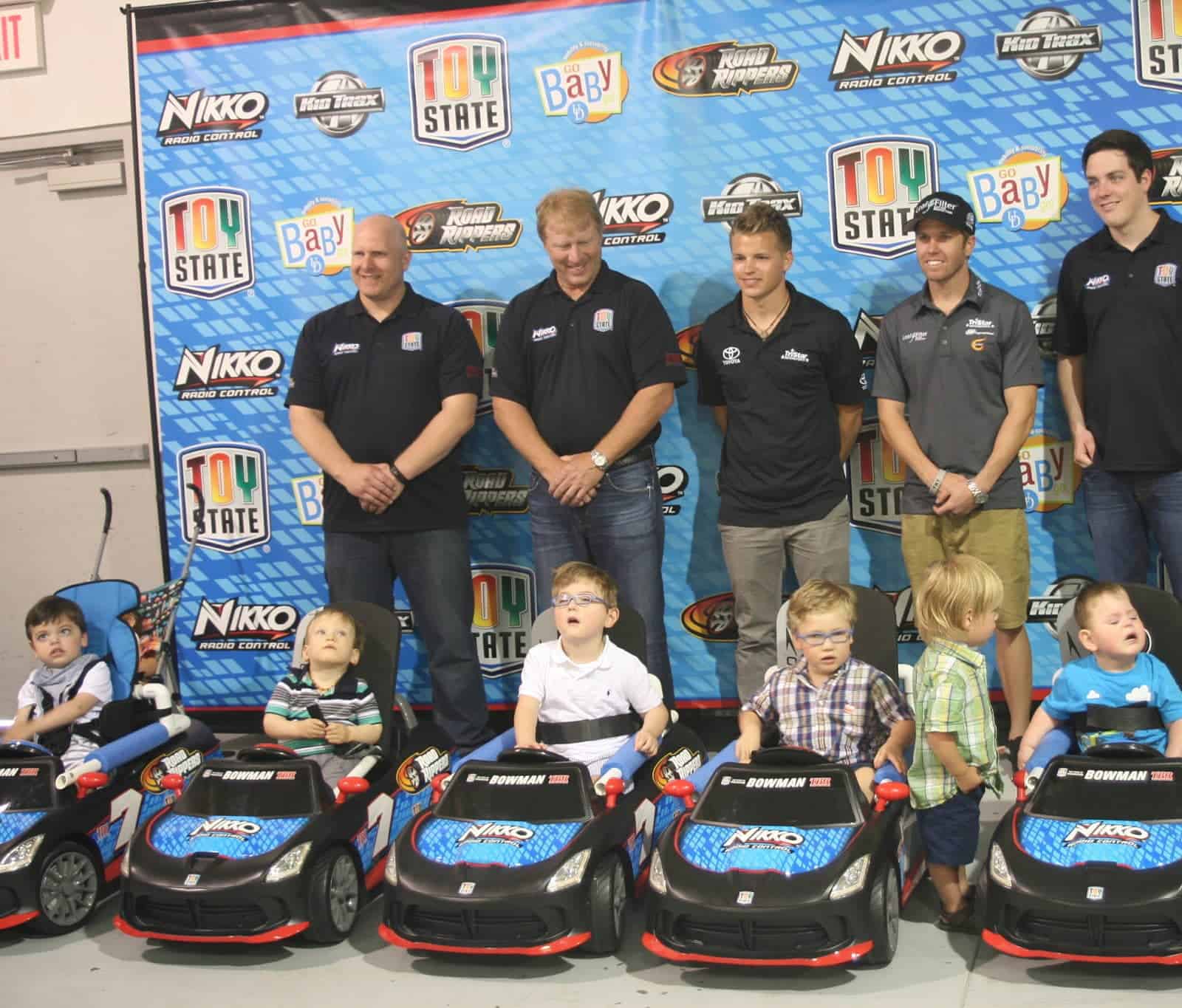 Sometimes there’s more to racing than cars going in circles as fast as they can. That was the case on Wednesday at the Tommy Baldwin Racing shop in Mooresville, N.C., on Tuesday (May 12), where a team, a sponsor and an organization came together to give some children a special gift: freedom.

Many factors can limit mobility for young children, from genetic conditions to injuries. For those children, things that most people take for granted, like simply getting from point A to point B, become an exercise in frustration, requiring the assistance of a parent, sibling or other helper. Running and playing with other children can be out of the question. For many families, mobility issues are a part of everyday life.

But thanks to Toy State and a program called Go Baby Go, several young children were given the opportunity to be independent by presenting them with their very own race cars. They don’t go very fast, but the tiny, customized replicas of Alex Bowman‘s Sprint Cup Chevrolet opened doors – and hearts. Some of the children had never experience the ability to move around on their own. Suddenly, they could.

Go Baby Go was founded in 2012 by Cole Galloway at the University of Delaware. The program shows families and medical professionals how to modify off-the-shelf battery-powered cars using modified switches and custom modifications to the seats to help children three years old and younger become more mobile, which in turn allows them to be more interactive with their peers. Ongoing studies of the effects of the increased mobility help researchers create future solutions.

The event at TBR is the first of four planned for 2015 in various locations across the United States. It wasn’t difficult to get the sponsor and team on board. In fact, the partnership was a match made in heaven.

Toy State, which sponsors TBR driver Alex Bowman in several races this year, and its Nikko brand of remote-controlled cars was a natural fit with the Go Baby Go program, and hosting the Charlotte-area event at Baldwin’s shop made perfect sense. The cars were customized to be miniature replicas of the black and blue No. 7 Toy State/Nikko Chevy, complete with Bowman’s name on the windshield.

“Toy State has been making toy cars for about 30 years,” said company President Andrew Friess during the event. “We’re always looking for new and exciting ways to not only fund programs, but ways that we feel like we can make a difference. When the Go Baby Go program came to our attention, it was a natural fit. It’s vehicle-focused. It’s something that we felt strongly about, trying to better these kids’ lives. These kids who we’re working with today, they have such challenges that just doing something like this lets them play more like those around them and fills up their day in a great way.”

Team owner Tommy Baldwin was a busy man during Tuesday’s event, but the broad smile on his face made it clear that the owner/crew chief was enjoying every minute. “They were going to have something in the Charlotte area,” Baldwin said of the program. “We brought up the idea that since it’s Speed Week, why don’t we have it at the shop and have a nice day here… and here we are. It’s hard to understand with what we do every day, but sometimes you have to stop for a couple minutes and think, ‘things aren’t that bad.’ To see the smiles on the kids’ faces and their parents’ faces, it’s just a cool deal.”

Baldwin said that the team would like to stay involved with the program in the future.

Bowman, 22, attended and met with the children and their families as well, and said that one of the best things about his partnership with Toy State is that he has opportunities to make a difference for children.

“It’s been a really fun year so far with Tommy Baldwin Racing,” Bowman explained. “Having Toy State, Nikko and Road Rippers on board has been pretty special. I’ve gotten to go to a lot of children’s hospitals and work with a lot of kids and make a lot of kids smile and donate a lot of toys. That’s not always something you always get to do, so having a sponsor who allows you to do that is a lot of fun. It’s eye-opening. It makes you appreciate everything you have a lot more.”

But it didn’t end there. Drivers from several other Sprint Cup and Xfinity series teams came to meet the children as well. Sponsors and manufacturers didn’t matter. Blake Koch, Cale Conley and Kasey Kahne talked to children and autographed cars.

“I got contacted by Alex’s group and when they told me what they were doing at Tommy Baldwin Racing, I told them I’d love to be a part of it,” Koch said as he watched a toddler motor past. “To get to come here and witness some of these kids getting to be mobile on their own for the first time — that’s a pretty big deal, especially for the parents. I know how I felt when I saw my son take his first steps, and that’s the feeling they’re getting right now, to see their kids moving on their own for the first time, and it happens to be in a race car, which is really cool.”

Older siblings in attendance were provided with remote-controlled toy cars (courtesy of Nikko, of course). Cup driver Michael McDowell merely laughed when one of these ran over his boot a few times. A father himself, McDowell said, “It’s just a cool opportunity and a great cause. Having three children, I definitely appreciate this. It’s fun. That’s what’s cool about our sport — I drive for a different race team and a different manufacturer and different sponsors, but when it comes to things like this, it’s about community and getting together, and that’s really neat.”

It didn’t take long for the youngsters to get the hang of their new wheels. The adults had to be on their toes to avoid getting run over, and a few quick saves were made to avoid the occasional collision. There was a lot of laughter in the room, and a few tears. Most of the tears came when the children in their cars were lined up for photos – because they didn’t want to stop.

Karen and Chad Bryant were among the parents in attendance. Their son Eli was one of the children who didn’t want to stop driving his new car, even for a few photos.

“I kind of knew about go Baby Go, but he was too young,” said Karen. “Then I heard they were coming here and just the early mobility for these kids who have a lack of mobility is so important for their development in every aspect: socialization, and being aware of their surroundings, just learning new things. So for him to be able to move around independently when he’s not able to normally because of his lack of mobility is just an awesome thing.”

At the end of the day, parents had seen a new side of their children. The event wasn’t about racing, really, but it was about the community that racing brings together like no other sport. It was about kids just being kids, something that most families don’t think twice about. Now, thanks to their new racy rides, these families won’t have to worry quite so much about it, either.

The kids had wings in the form of four wheels, and with the press of a button, they had freedom.