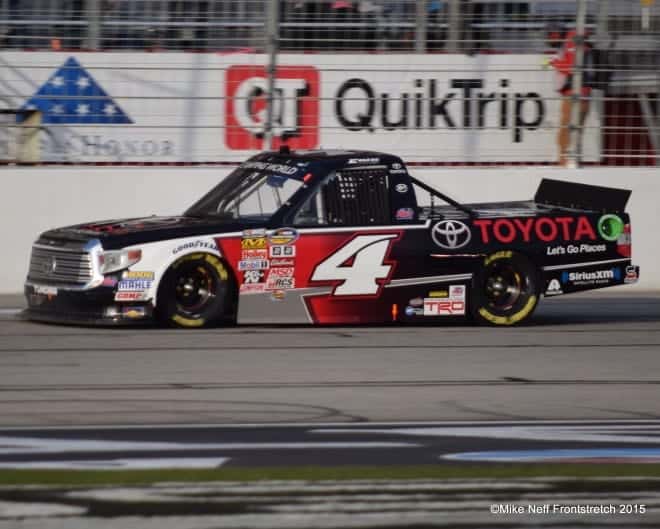 In his first race of the year with backing from Dollar General, Jones put down the fastest lap of the day with a speed of 180.693 mph. He was followed on the charts by NTS Motorsports’ Scott Lagasse Jr., who put down a 180.668-mph lap late in practice in his No. 31 Chevrolet. Jones’s teammate Matt Tifft was third quickest in his first day piloting the Kyle Busch Motorsports No. 51 Toyota with a speed of 180.608 mph.

Kahne continued to show speed in the evening session after topping the first session, driving his No. 00 Haas Automation Chevrolet to a fourth-quickest 180.493 mph lap.

Looking for his fifth win in six starts, Kahne drove his No. 00 Chevrolet for JR Motorsports to a 180.258-mph lap to top the first three-hour practice session. NEMCO Motorsports’ Joe Nemechek followed Kahne to second-fastest on the charts with a 179.856 mph lap in his No. 8 truck.

2012 Sprint Cup Series champion Brad Keselowski put up the 10th-fastest speed with a 178.501-mph lap. He’ll make his second Truck Series start of the year on Friday night, driving his own BKR No. 29.