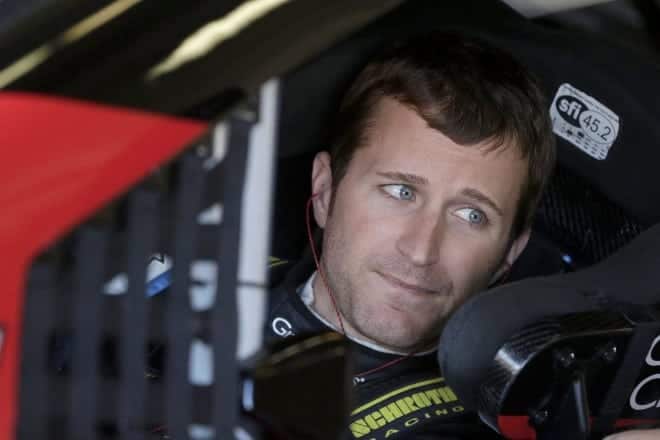 .005 seconds. That’s all that separated Kasey Kahne and Erik Jones after 139 laps at Charlotte Motor Speedway.

Kahne nipped Jones at the line to win the NASCAR Camping World Truck Series North Carolina Education Lottery 200. The win was the first for JR Motorsports in Truck competition, the 200th for Chevrolet, and Kahne’s fifth victory in six Truck Series starts.

The win came at the end of a great battle between Kahne and Jones. Both drivers came from the rear of the field – Kahne for unapproved adjustments, Jones for missing the drivers’ meeting – after qualifying in first and second, respectively. Jones showed that he had the dominant truck early on, rising to the lead on lap 26 and dominating the midway portion of the race. He continued to hold first place until a restart with just over 30 laps remaining. Kahne and Jones were side-by-side for several laps afterwards, with Kahne securing the top spot when a caution fell for a spin by Mason Mingus with 18 laps left.

Kahne then took off on the ensuing restart, but Jones was able to track him back down, taking the lead with four laps remaining. Jones began pulling away and was cruising to the white flag when the caution fell once again, this time for Daniel Hemric‘s crash.

Kahne and Jones again battled side-by-side in a green-white-checkered finish, staying side-by-side right up to the start/finish line in a heart-pounding ending for all involved.

Behind Kahne and Jones, Matt Crafton was able to work his way around Tyler Reddick on the last lap to come home in third. Reddick finished fourth, followed by team owner Brad Keselowski, who led early on but later lost track position due to a lengthy pit stop.

Crafton’s points lead dropped by a single point with his third-place result. He now holds a 16-point edge on Jones and an 18-point cushion on Reddick.

The field was slowed for 25 laps as the result of five cautions. There were 12 lead changes amongst six drivers.

The Truck Series will return to action on May 29, a Friday afternoon affair when the field heads to Dover International Speedway for the Lucas Oil 200.

UPDATE: Kahne’s race-winning Truck failed post-race technical inspection at Charlotte. No word as of 11:45 p.m. ET on possible penalties for the team.

I think I would laugh so hard I would wet myself if just once a member of the racing press developed some primary sexual characteristics and asked one of these Cup slummers, “Do you think anyone anywhere gives a sh-t how many home runs Hank Aaron hit in the minors?” Ah, to dream.

I enjoyed seeing the emotion Jones showed after the race. These kids just aren’t used to a race win being stolen from them by caution flag manipulation for our entertainment. There is no question that Daniel Hemric’s brushing the wall should not have caused a caution with two laps remaining. Jones stalking and passing Kahne with 4 laps to go wasn’t enough excitement for us NASCAR fans. We needed and got a green/white/checkered. It seems ironic that NASCAR gifted the win to Kahne who then was found illegal. I’m sure NASCAR would like to take it back now and give Jones the win but do to another asinine policy, they won’t take a win away from a proven cheater so that the fans who saw the finish don’t get confused. The sad part is that by the time these young guns move up to Cup, they quickly become almost emotionless institutionalized corporate shills who mask most of their opinions. The up side is they’ll be rich.