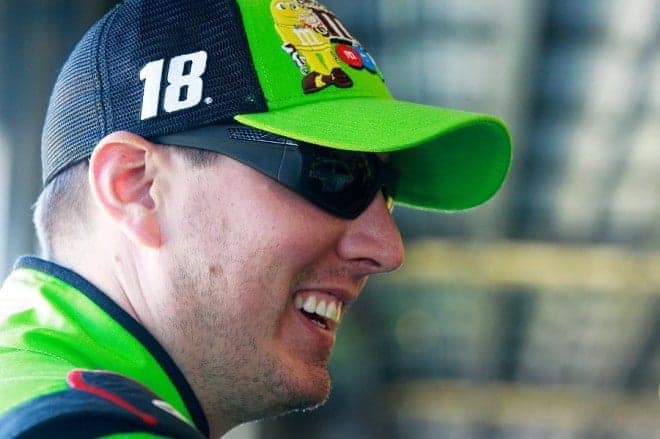 The Sprint All-Star Race weekend has finally arrived, and the much-anticipated non-points events are set to kick off on Friday evening with the Sprint Showdown. As the sun beamed down on Charlotte Motor Speedway early Friday afternoon, two extended practice sessions – one for each event – provided an opportunity for teams to test setups for next weekend’s Coca-Cola 600.

Making his return to the NASCAR Sprint Cup Series following multiple leg injuries at Daytona, Kyle Busch was quick right off the truck. The No. 18 car sat inside the top 10 throughout practice, but in a final qualifying run, he put up the fastest time out of the 17 cars that are already locked into the All-Star Race.

Posting a time of 28.589 seconds, Busch edged out Jamie McMurray and Kevin Harvick at the end of practice. He is running his first event since the NASCAR Xfinity Series season opener, and it is the first time he is driving a Cup Series car in race conditions with the tapered spacer, among the other aero changes that NASCAR implemented this season.

Kurt Busch held the fastest time for the majority of the session, but fell to fourth by the time practice concluded. Kasey Kahne ran the most laps with 56, with Joey Logano and Jeff Gordon each running over 50 laps as well. At the conclusion of practice, NASCAR gave the 17 teams 10 minutes to practice getting onto pit road in preparation for the All-Star Race qualifying format, which enables cars to not have a speed limit entering the pits.

Richard Childress Racing’s Austin Dillon was the fastest driver on the day, putting up a 28.528-second lap in the early session for the Showdown. Running 49 laps during practice, the No. 3 car also had the quickest 10 consecutive-lap average out of nine cars. In his lone Showdown race, Dillon started on the pole, but faded to eighth after leading three laps.

Greg Biffle was a mere 57 hundredths of a second off Dillon’s time as he attempts to make it in the All-Star Race. Biffle is running the Showdown for the first time since 2010; back then, he was able to transfer into the main event. Martin Truex Jr., who sits second in the championship standings, was third in practice, followed by Paul Menard and Danica Patrick.