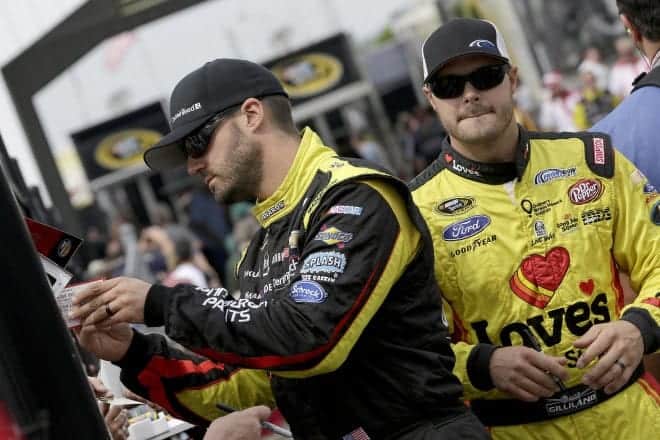 Paul Menard is looking to make it into the Sprint All-Star Race with a victory in Friday night’s Sprint Showdown. Thus far, he has a slight advantage over the rest of the field.

Menard has won the pole for the preliminary race with a time of 28.470 seconds. Making his eighth Showdown appearance, he is looking to advance to the All-Star Race by winning a segment for the first time in his career. Prior to this weekend, Menard’s best finish in the Showdown was fourth (twice). This is the second consecutive year that a Richard Childress Racing car has won the pole for the Showdown.

Starting on the front row with the No. 27 Chevrolet will be Greg Biffle, who missed the pole by a mere two one-thousandths of a second. Biffle has only run the Showdown twice in his career (2003 and 2010), making it into the All-Star Race each time. David Ragan, who is making his second start for Michael Waltrip Racing, will start third. His teammate (and reigning race winner) Clint Bowyer qualified fourth, with Austin Dillon starting fifth.

Danica Patrick starts eighth for Stewart-Haas Racing, a longshot to win the event but is expected to be one of the front runners for the fan vote if she cannot race her way into the All-Star Race. Rookie Chase Elliott, making his third appearance in a Cup Series event, will start 11th for Hendrick Motorsports.

29 cars are entered in the race, which will take the green flag at approximately 7:15 p.m. ET on Friday evening. Patrick, Martin Truex Jr., Josh Wise and Kyle Larson are the front runners to earn the Sprint Fan Vote. Two drivers will race their way into the All-Star Race. The driver leading after the halfway mark earns a spot into the elusive event, with the winner of the final 20-lap segment also locking into the race.