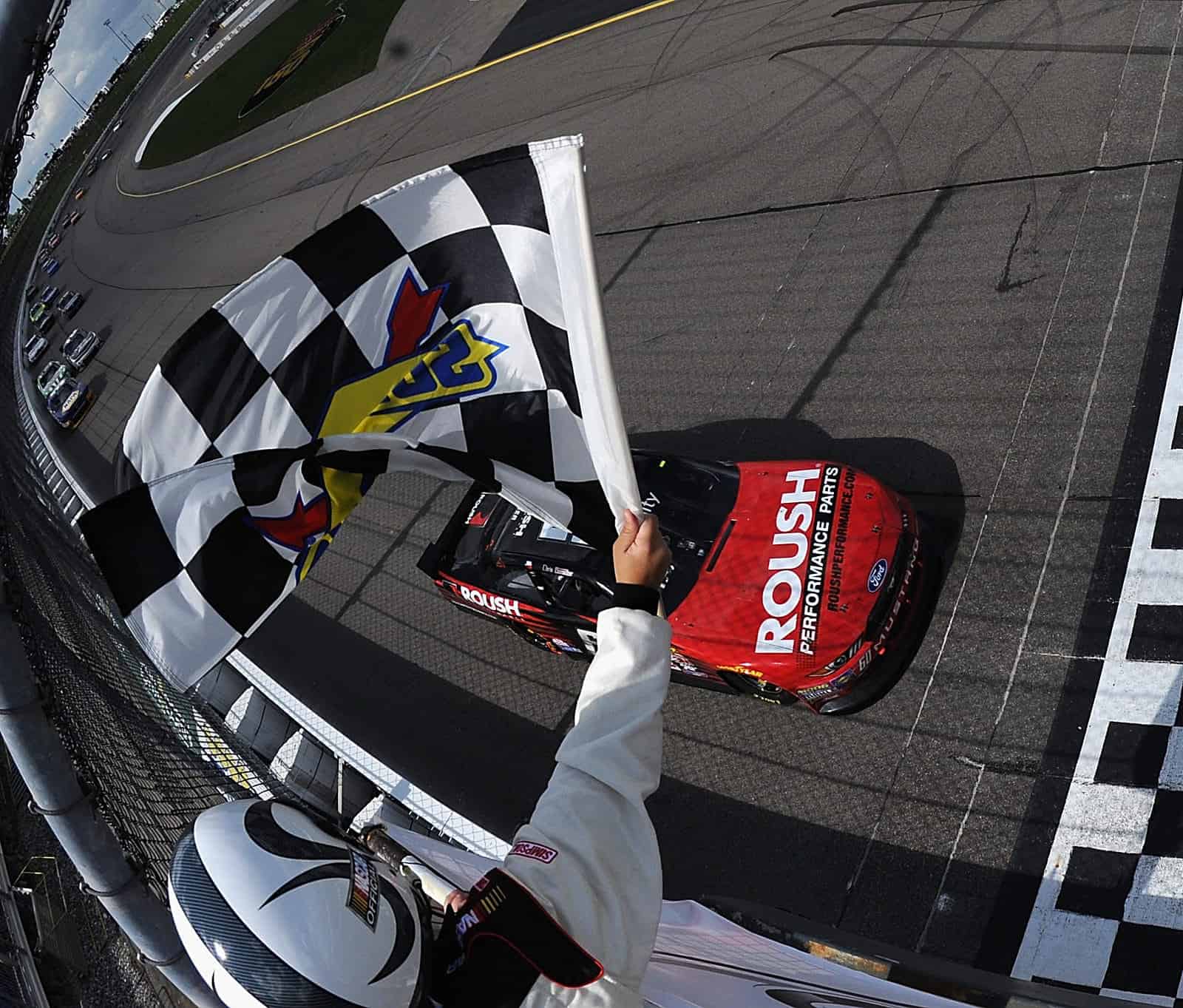 It just isn’t over till it’s over.

Chris Buescher had a perfect restart and two fresh tires during a first attempt at a green-white-checkered finish to win his second Xfinity Series race at Iowa Speedway – a race that had big opportunity on the line with no Sprint Cup regulars in the field.

“We knew we were fast this weekend,” Buescher told FOX Sports 1 in Victory Lane. “That was nerve-racking at the end. We had to have something fall our way and it did there. We got those tires on that Chase had a little earlier and we were able to get going on that restart.”

Buescher was more than two seconds behind leader Chase Elliott with two laps to go in the 3M 250. A two-car accident between Jamie Dick and Ross Chastain drew a caution, which brought nearly every lead-lap car onto pit road.

The yellow flag proved to be a devastating blow to Elliott, who only had Ryan Reed alongside him with older tires while the rest of the field was on all-important fresh rubber.

Buescher restarted third with two new tires on his No. 60 Roush Fenway Racing Ford and dove to the inside of Reed to make it three-wide for the race lead into turn 1. It was smooth sailing for Buescher, who grabbed the win over Elliott and Erik Jones.

“It went better [than I anticipated],” Buescher said of the final restart. “We knew the front row had older tires. That turned out really well and we got to the bottom and drove away.”

Leading a race-high 114 laps, defending Xfinity Series champion Elliott had to hold off Jones to finish second. Elliott called the result “hard to swallow” after being half a lap from the white flag, which would have ended the race if the caution flag had flown afterwards.

“Its just racing some days,” said Elliott. “Chris [Buescher] did a good job, congrats to him. Our guys did a great job this weekend. We were one of the better cars all day long and that’s something to be proud of.”

Rounding out the top five was Brian Scott in fourth with Ryan Blaney right behind him in fifth. Darrell Wallace Jr., Ben Rhodes, Brandon Jones, Elliott Sadler and Brendan Gaughan closed out the top 10.

Jones was two days removed from a thrilling Camping World Truck Series event at Charlotte where the 18-year-old lost the race by 0.005 seconds. Today was not as painful for Jones, finishing third after starting from the rear of the field.

“Honestly I wish we had more laps,” said Jones. “I thought we were in a good position, restarting on the top there and trying to make a run at it. If I can do it over, I wish I would’ve been third.”

Meanwhile, an interesting series of events took place between Brennan Poole and JJ Yeley as the drivers made contact on two separate occasions.

“I’m trying to make myself known in this sport so I can stay here,” said Poole who was parked by NASCAR after the retaliation. “Then one of my heroes just deliberately crashed me five laps into the race.”

Daniel Suarez got the short end of the stick in the closing stages as fuel became the concern. Qualifying second, Suarez led a career-high 48 laps and had a top-five finish in his hands before the late caution forced him to pit road for fuel. The Mexican-born driver finished 18th, two laps down.

The series heads next to Charlotte Motor Speedway on Saturday for the Hisense 300, where Kyle Larson is the defending race winner.