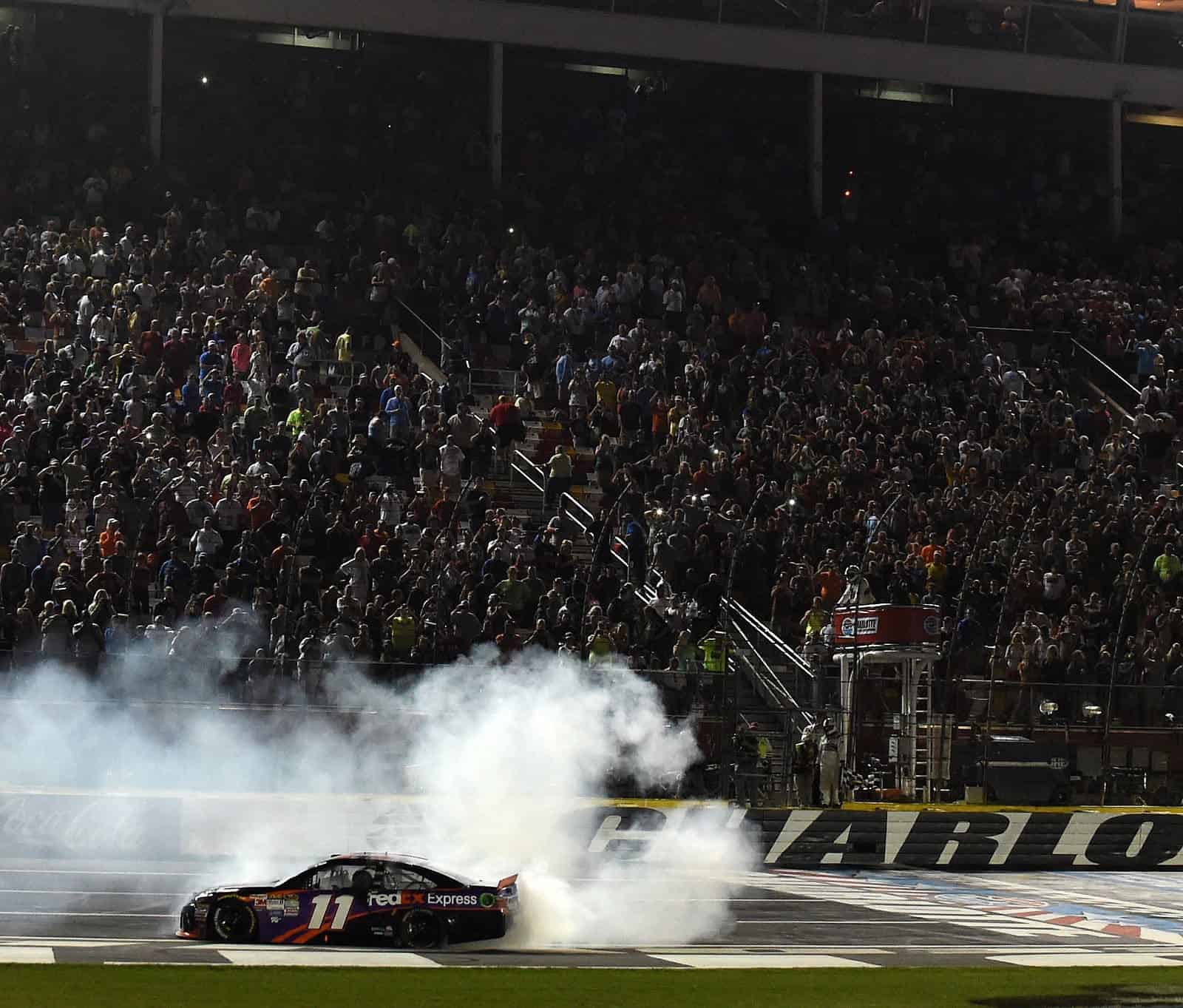 Earlier today in qualifying for the 31st Sprint All-Star Race, while attempting to slow down and make it into his pit stall, Denny Hamlin, knowing that he would likely miss his pit, put his car in reverse before he stopped. That move proved to be worth $1 million, as he started first and won on stock car racing’s All-Star night.

Hamlin had solid finishes in the first two segments, using track position to his benefit, but a speeding penalty sent him to the back of the field for segment three. A two-tire call, paired with a lot of encouragement from crew chief Dave Rogers, bolted Hamlin back near the front of the field for segment four. That upped his average finish, launching the driver back into contention, and then his pit crew took care of the rest. A lightning-quick, 10.4-second stop put Hamlin out front for final 10-lap shootout and on the restart, he never looked back. Edging Kevin Harvick by 12 car lengths, the win is Hamlin’s first in the All-Star event, the first for Toyota and the first for Joe Gibbs Racing.

Hamlin’s win capped off a good night for JGR. Matt Kenseth finished fifth and Kyle Busch, making his first start in a NASCAR event since his injury in the Xfinity Series season opener at Daytona, rallied from a speeding penalty to finish sixth.

Harvick nearly went from starting last in the race to finishing first but had to settle for a second-place result for the second year in a row. Segment four winner Kurt Busch, who at times appeared to have the strongest car in the field finished right behind his teammate in third. Jeff Gordon, making his final appearance in the All-Star Race, ran fourth. To honor his final All-Star start, the drivers, his family and former crew chief Ray Evernham met him on stage.

Kasey Kahne was first at the end of segment one, but finished the 110-lap event in seventh. Team Penske’s Joey Logano was eighth while teammate Brad Keselowski, after leading a race-high 49 laps, settled for ninth. The No. 2 was dominant at times throughout the night, winning segments two and three, but a speeding penalty on the last pit stop cost him a chance to win. Dale Earnhardt Jr., fighting an ill-handling car most of the evening, rounded out the top-10 finishers.

Jamie McMurray, Carl Edwards, Ryan Newman, Tony Stewart and Danica Patrick rounded out the finishing order. Patrick, this weekend’s Fan Vote winner, was never a factor and suffered mechanical problems, sending her behind the wall. That was the only major “incident” in an All-Star event that was virtually contact and caution-free (besides the mandatory yellows under the format).

So on a D-shaped oval, the guy who was first off pit road on the last set of stops pulled away for the win. What a surprise.

Yaaaawn. The all-star race is what it is and it doesn’t really matter on the grand scheme of things. Maybe NASCAR should stop over-hyping it as some kind of exciting, drivers throwing caution to the wind, full contact event that differs that much from a normal race. I think that is more annoying than the lack of excitement during the race.

Same with the Bristol race. Empty promises are annoying.

It’s probably worth noting that the second and third place finishers (Harvick and Busch) both claimed after the race that Hamlin jumped the restart by accelerating prior to the re-start zone. (Clearly marked at Charlotte with red and white paint) Again just a sign of desperation. Whichever driver led that first lap after the final restart was all but assured of the win….which turned out to be the case. Sour grapes on the part of the first and second losers? Perhaps but the aero issues are killing NASCAR racing. Good to see JD Gibbs back at the track though.

Double file restart integrity is just another issue brought on by NASCARs relentless efforts to entertain us.

any bets Dave Moody and Chocolate won’t talk about Danica having her first top 20 finish in the All Star race.

i called it last week when i said princess sparkle pony would get fan vote. by no means should she had been in that race.

i got tired of dw kissing hamlin’s butt and of course i fell asleep. having race start after 9 was too late for me.

even the driver intros seemed lack luster. drivers didn’t walk down with the teams, as previously.

michael waltrip is an idiot, but it was a good thing that he did with bryson byrnes. during the driver intros to the race i was thinking about steve byrnes and how he did driver intros.