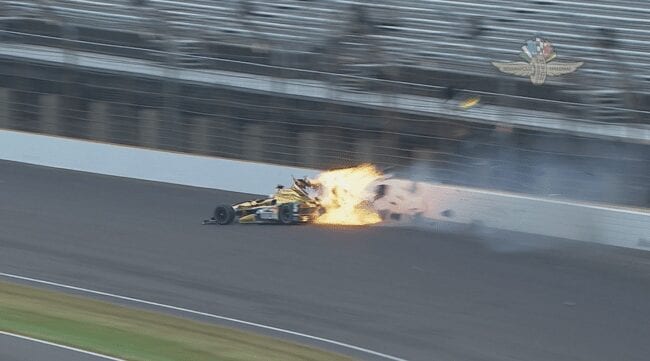 Monday practice for the Indianapolis 500 was delayed and postponed to later in the afternoon due to yet another violent incident at the Indianapolis Motor Speedway – this time involving James Hinchcliffe and Honda.

Hinchcliffe crashed 50 minutes into the session and was taken to a waiting ambulance on a stretcher. He sustained an injury to his upper left thigh and underwent surgery at IU Methodist Hospital in Indianapolis.

A Honda crash analysis concluded that the incident began when the push rod in the right-front suspension of the car broke in the entrance of turn 3 when the load was at its highest. The break resulted in the car’s ride height dropping to the pavement and a loss of steering that sent Hinchcliffe hard into the wall.

As a result, the right side of his car barreled into the SAFER barrier and caught fire.

The impact tried to turn his car over and it eventually slid down the track with its right side sheered apart. To be clear, it was not a true flip like the Helio Castroneves, Josef Newgarden and Ed Carpenter‘s crashes late last week.

Medics and safety workers quickly responded when Hinchcliffe did not get out of the car. Video from the replay in the media center showed the medical staff speaking to the driver. He was awake and alert during his transit to the hospital.

As a result of the incident, IndyCar cancelled the remaining three hours of practice as series officials launched an investigation into the continued crashing at the venerable speedway. Practice resumed from 4:15-6:00 p.m. without incident.

A push rod broke. Are these spec parts or do the teams source them out on their own?

Sorry to hear that Hinchcliffe was injured. There have been a lot of ugly crashes at this run up to the Indy 500. Hope that he has a quick recovery.