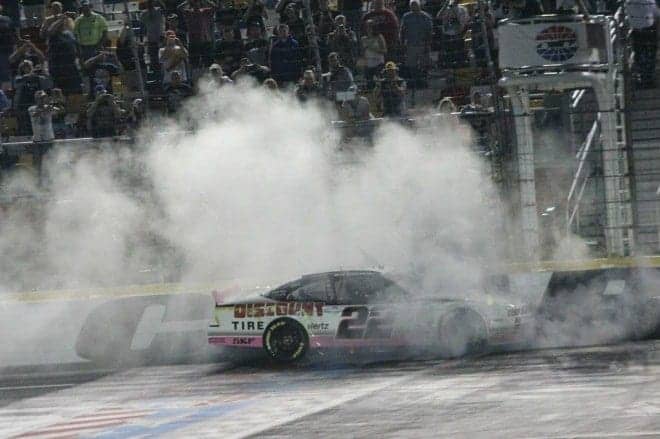 After a standalone weekend at Iowa Speedway, the NASCAR Xfinity Series (NXS) is returning home.

NASCAR officials released the entry list for the May 23 Hisense 300 on Saturday (May 16). The list contains 42 drivers, meaning two will fail to make Saturday’s race.

While an NXS regular won at Iowa, they may find it difficult to repeat that feat. Six Sprint Cup Series regulars will run at Charlotte, including early season NXS winners Denny Hamlin, Austin Dillon and Kevin Harvick.

Kasey Kahne will make his second NXS start of 2015, driving the No. 5 Armour Vienna Sausage Chevrolet. Kahne last ran for JR Motorsports last weekend in the Camping World Truck Series, where he brought the team its first win at Charlotte. He’ll join JRM teammates Harvick, Chase Elliott and Regan Smith as the team looks for their third win in 2015.

Cup regulars Kyle Larson and Aric Almirola will also look to win in Charlotte. Larson, the defending race winner, will drive the No. 42 Chevrolet for HScott Motorsports with Chip Ganassi. Almirola will make his fifth start in the No. 98 Ford for Biagi-Denbeste Racing.

Erik Jones will look for his second win as he returns to the No. 20 for Joe Gibbs Racing. He’ll be joined by Hamlin and Daniel Suarez, who led a career-high 48 laps in Iowa.

Ryan Blaney will return to the No. 22 Ford for Team Penske. Blaney has two starts on the year, including a runner-up showing at Las Vegas Motor Speedway.

The NASCAR Xfinity Series will roar to life at Charlotte on May 21 for two practice sessions. They’ll return to action on May 24 for Coors Light Pole Qualifying at 11:15 a.m. ET, followed by coverage of the Hisense 300 on FOX Sports 1 at 2:30 p.m. ET.