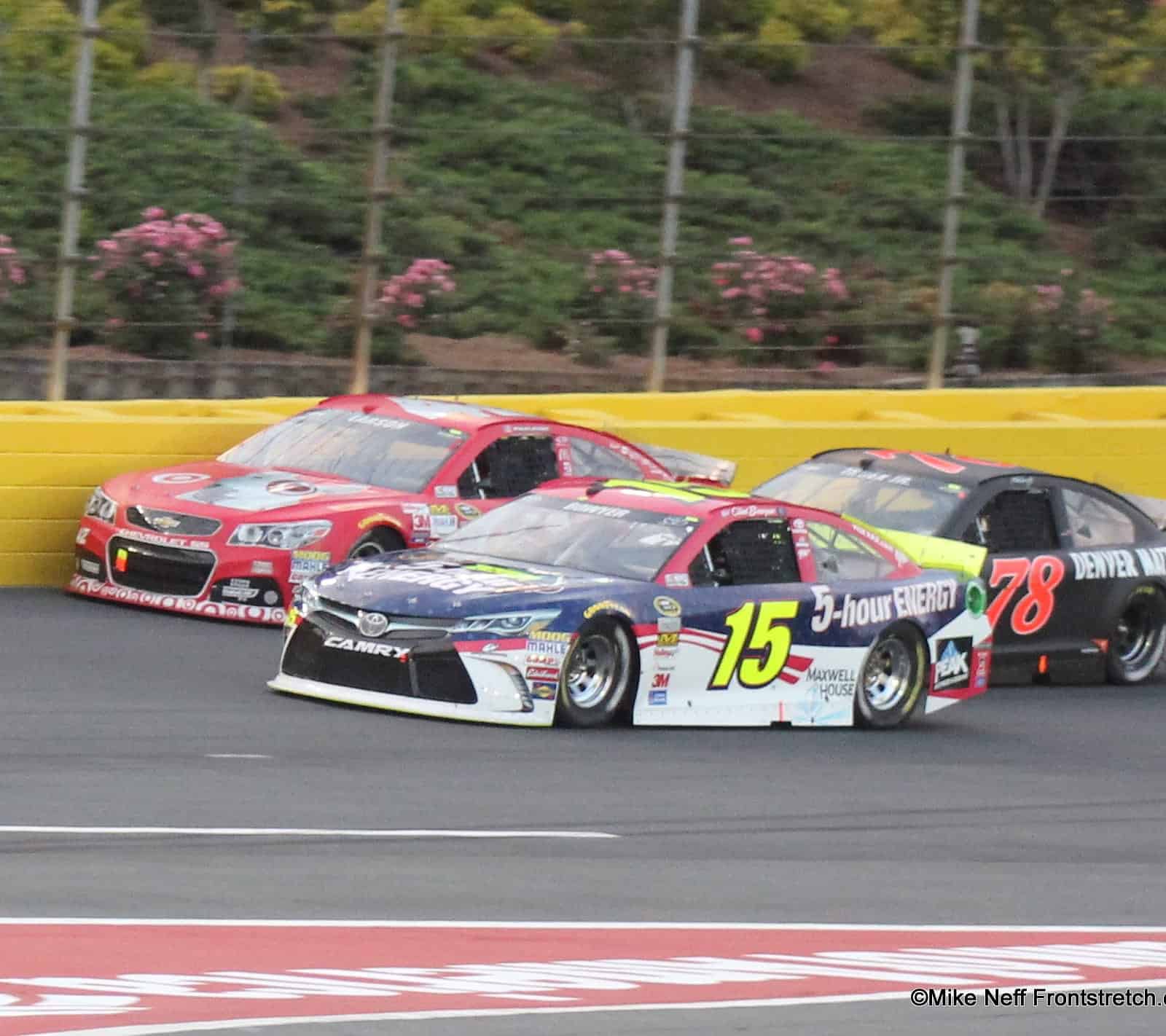 Since I’ve been away for a while, there’s a whole lot of writing to do on how each Sprint Cup driver has been performing in 2015. In this day and age of the “new” Chase, looking at the point standings to gauge a driver’s performance is often an optical illusion; once someone wins, scoring points is a bit of an afterthought as their spot in the postseason is already assured. How do you figure out, then who’s really in contention when a good quarter of the field could care less about whether they’re third or 13th? It’s a rare moment in this age of technology where the bone gets thrown back to the experts, the guys with sources paid to gauge raw speed and who really has the backbone to succeed in those final ten races.

With that in mind, cue the Driver Report Cards, an annual check-in I once used to do regularly at SI.com. Like then, I grade a driver’s season based on their expectations, compare results to the quality of equipment they drive and whether current momentum has them headed in the right direction. A guy with five top-10 finishes, for example, that hasn’t had one since March probably won’t get as good a grade then as a driver who has five top 10s in a row.

You all still with me? Done with your ADD, checking Twitter and Facebook between a 1,500-word column? (That’s where I fear we are now). Good! Let’s get started with the first 15 Cup full-timers….

Analysis: Allgaier, early in his Cup career has had a knack for “wrong place, wrong time.” I can count at least five potential top-10 runs last year he had ended by either random mechanical failure, a wreck not of his making or bad pit strategy. But this year, as a sophomore he initially found a bit of a four-leaf clover, cashing in on the short tracks (see: Bristol above) and showed signs of growth. He has two top-15 finishes; last year, he had none. He also a has a teammate in Michael Annett who will help small-time HScott Motorsports slowly rise up with Hendrick Motorsports support. Considering how well the top HMS teams are running, you’ve got to expect there’s nowhere to go but up here; however, the last two races, where Allgaier crashed out twice give me pause that the Bad Luck Blues might be back at the No. 51. Grade: C-.

Analysis: Look, I know AJ is this lovey-dovey feel-good story where he’s come back from the depths of despair to a Disney World racing castle. He even acts the part, a 33-year-old man going on 12, more likely to join a water-balloon fight than debate you on foreign policy or politics (the anti-Brian Vickers). But a contract extension through 2020? For a team that hasn’t run inside the top 10 in two months? That’s the type of deal you give Jeff Gordon, not Mr. Feel-Good. If it wasn’t for the legitimacy of Kroger, who recently extended their sponsorship deal with JTG Daugherty Racing, my bull**** meter would be on high alert. We’ve seen these “big” announcements before with teams like these, especially back in NASCAR’s heyday only to hear two weeks later, “team filing for bankruptcy.” On-track, AJ’s been a step behind some of the other Richard Childress Racing satellites and needs another road course win to stay relevant in the second half. After all, there’s no more sponsors or extensions left to announce… Grade: C+.

Analysis: He has just one top-five finish, recorded Sunday at Dover. He hasn’t led a single lap. But in the watered-down, 16-driver Chase Almirola is the epic example of mediocrity racing its way to the front. Making the most of mid-level opportunities (15th at Daytona and Talladega, 11th at his strongest track, Kansas) the driver’s fought through a Ford program at Richard Petty Motorsports that’s several steps behind. With other drivers taking big risks, watching their point totals rise and fall like rollercoasters Almirola is like the little blue engine that could, completing all but five laps so far this season. Will putt-putting his way through be enough? Barring another Daytona miracle, it’s his only hope. Grade: C.

Analysis: Annett was a Daytona 500 surprise, running strong with HScott Motorsports’ new second team. But a DNQ at Atlanta stalled momentum; Scott needed to “buy” a seat from fellow underdog Joe Falk just so Annett could start the race. The team hasn’t seemed to recover, struggling on intermediates in particular while at one point scoring four straight finishes of 38th or worse. It looks like the info gained here is helping teammate Allgaier; it’s just not helping change the perception Annett is good enough to stand on his own two feet in Cup. Grade: D.

Analysis: Back in 1990, Derrike Cope won the Daytona 500 when Dale Earnhardt Sr. blew a tire on the final lap. He’s spent the next 25 years living off that miracle despite only one other Sprint Cup win. You figured that type of deal is one that comes along once in a lifetime.

Turns out it might be twice. Bayne? At this point, you wonder if he’ll even get another victory four years after the same lucky break. The 2011 Daytona 500 victor, while suffering through multiple sclerosis is running worse than some underfunded teams with powerhouse Roush Fenway Racing. Bayne, who recently made his 70th Cup start, hasn’t run inside the top five since then. Repeat: four years and no top-five finishes. Keep in mind that Bob Osborne, the former mastermind for Carl Edwards, is on top of the pit box here. There’s no learning curve for the No. 6 mechanics, even though the engineers are seemingly out of their league.

It all adds up to bad news for Bayne, one of the sport’s nice guys on track for a nice career elsewhere. You wonder, considering how well RFR’s Xfinity Series program is running whether he’s simply keeping a seat warm at this point for 2016. Grade: F.

Analysis: Biffle showed signs of life at Charlotte, winning the Sprint Showdown and impressing in the All-Star Race until he overdrove his No. 16 Ford into the wall. He then went on to earn his first top-five result of the season in Sunday’s Coca-Cola 600. The bad news? His best finish, up to that point occurred in the sport’s season opener out in Daytona (10th). Biffle, a consummate point racer still has time to get it all together and make the Chase. But just eight laps led? A 32nd at Fontana, a sister track to Michigan (once the Biff’s personal playground)? At 45 years old, older than the retiring Jeff Gordon, you wonder if he’s rethinking that contract extension. Grade: C-.

Analysis: I still think one of the season’s most perplexing moments is Blaney staying in line during Talladega’s final lap. Why would a part-time driver with nothing to lose play it safe? Didn’t he watch Brad Keselowski build his career off one Talladega last-lap maneuver? Has anyone told him Roger Penske won’t pay for a full-time gig without proper sponsorship? As a driver who has a soft-spoken personality, you don’t sell yourself to Fortune 500 companies by settling in and finishing fourth. You sell yourself by at least trying to get on a highlight reel, either winning or nearly wrecking yourself trying. It’s been a good season, a solid add for the Wood Brothers’ No. 21, but Blaney needs to learn from that. Grade: B.

Analysis: Bliss, now 50 years old, has cobbled together 175 Sprint Cup starts. That’s incredible considering his only top-five finish came over 10 years ago; his last top-10 result came at Daytona in 2010. Bliss, driving the majority of events in the underfunded Go FAS Racing Ford hasn’t had the same success there, posting an average finish of 34.2. But there’s a reason this veteran, a quiet “get the job done” guy keeps finding a spot. He finishes each start with the car intact, an important role to play with a team that’s otherwise gambling on young, rookie drivers likely to get themselves into trouble. Grade: D.

Analysis: Bowman, settling in with Tommy Baldwin Racing for his sophomore season, started off with a Daytona 500 DNQ. He’s since seen the team downgrade to one car, mastermind mechanic Kevin “Bono” Manion jump ship for greener pastures, and weathered rumors the team is about to be sold. Uh-oh. To think, Bowman thought BK Racing was full of drama; maybe staying put there was a better move? The team may hang in there, as Baldwin is back on top of the pit box but they’re no longer the “most promising” underdog operation that once partnered with Stewart-Haas Racing. Grade: D+.

Analysis: I’ll come out and say it; Bowyer has no business being anywhere near Chase contention. His Michael Waltrip Racing organization, let alone the No. 15 Toyota, has zero top-five finishes across the board. Bowyer has been involved in at least as many wrecks as laps led (two). Yet the No. 15 team, due to Kyle Busch’s injury and a potpourri of pathetic performances by middle-tier programs, is edging Danica Patrick for that all-important “bubble spot that’ll be a guaranteed out in round one.” The hope is installing new full-time teammate David Ragan inside MWR will stabilize the program, increase information-sharing and get this ship righted. I don’t know about that; since that fateful Richmond controversy, back in 2012 the team has simply not been the same and may never be. Grade: C-.

Roush isn’t good in the Cup, anymore. Some say it’s the drivers, other say engineering and handling or whatever issues with the cars holding them back. Btw, I too am a writer. I write at a new site called nascarfemale.com.