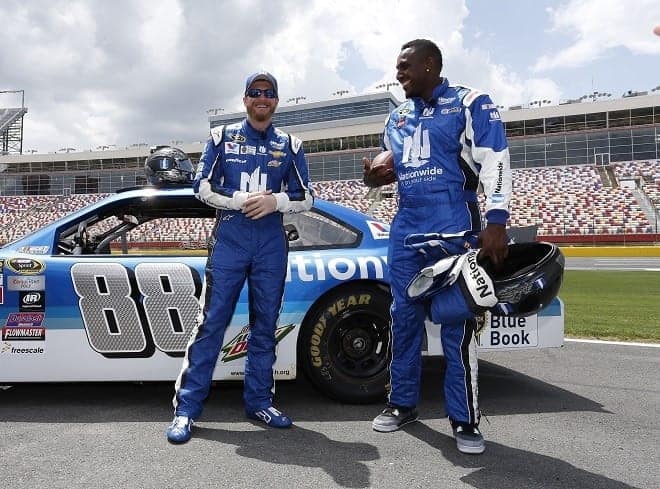 Davis will also have the unique privilege of serving as the honorary pace car driver in Sunday’s Coca-Cola 600 at the Charlotte Motor Speedway. The linebacker took several laps around the track in the official pace car just before the high speed thrill ride in Dale Jr’s No. 88 Chevrolet.

“It was a great experience. I’m truly excited about coming out here on Sunday and being part of this,” Davis said in a release. “It’s a dream come true. You sit around and you think about doing stuff like this, but when you actually get to do it, it’s amazing. It’s a lot like being able to run out and hear our fans cheering – the same kind of adrenaline rush.

Davis was pretty nervous while driving the pace car. “I only got to about 110 (in the pace car). The curves kind of made me a little nervous, but other than that, I tried to open it up as much as I could.”

The Charlotte Motor Speedway is a track that Earnhardt does not have a points win at. The Coca-Cola 600 is the longest race on the NASCAR circuit to this day. The marathon event is 600 miles in length. A win this weekend would certainly mean a lot to the North Carolina native.

“The 600 at Charlotte is just one of the premier races on the schedule,” Earnhardt Jr. said. “When people ask you about the biggest races of the season, the 600 is definitely on that list. It’s the only 600-miler and I’ve never won a points race at Charlotte; it’s been on our list for a very long time. This is our home track. I’ve been coming here since I was a little kid and just dreamed of being able to go into Victory Circle after that 600 and celebrate.”