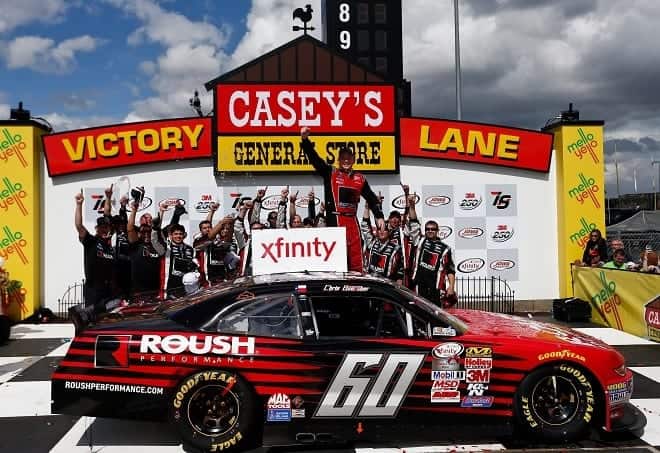 Welcome to another edition of Tweet ‘N’ Greet! Every week Frontstretch will scour Twitter looking for some of the best posts from your favorite NASCAR drivers, industry accounts and other NASCAR personalities! We hope you enjoy some of our favorite tweets from the previous week!

When we have kids, we always try to give them what they would want to eat. Keelan, Kevin and DeLana Harvick’s son, asked for a pizza. When they got to the pizza place – it appears Keelan changed his mind and wanted a salad. It is safe to say, Keelan is already eating healthy!

In order to "DESERVE" to be in the race you have to qualify, we did not. We will get them next week.

Martin Truex Jr. showed some good sportsmanship after the Sprint Showdown race Friday night at the Charlotte Motor Speedway. Truex, who sits second in the NASCAR Sprint Cup Series driver points, barely missed getting into the Sprint All-Star race on Friday. This is one side of racers that a lot of fans might not ever see.

MY FANS ROCK! Thank you so much for voting for me! I will do everything in my power to make you proud tomorrow night! #SprintAllStar

After getting into the All-Star race via the fan vote, Danica Patrick took some time after the race to thank her fans. Patrick won the fan vote in one of the closest finishes since it were implemented back in 2004. She also became the first driver to win it multiple times.

This guys growin fast. 5 months. Wants two things. To be where Amy is, and all the food I own. pic.twitter.com/0RDCyL8dzW

Dale Earnhardt Jr. can’t believe how much Gus has grown since they first got him earlier in the year. It seems the dog is a girl’s dog and wants every bit of Dale’s food. If you have furry friends – we all know what this is like!

Iowa Speedway has never been a disappointment when the NASCAR Camping World Truck or Xfinity Series races on the 0.875-mile oval. The trophy handed out is among one of the coolest all season long on the series tour. Ricky Stenhouse Jr. posted this tweet, showing everyone their collection of them!

Just answered all 141 texts. Thanks everyone. And thanks @ROUSHPerf @FordPerformance @roushfenway what a day!

Chris Buescher captured his second NASCAR Xfinity Series victory on Sunday at the Iowa Speedway. Buescher, however, had a little problem when he looked at his phone. Let’s just say – that is a lot of text messages!

Michael Waltrip and Bryson Byrnes, son of Steve Byrnes, had some fun on the grid just before the Sprint All-Star race at the Charlotte Motor Speedway. Byrnes carried a case with $1 million around each of the drivers. Byrnes nicknamed the case “The Alligator” and would shut it if the drivers tried to touch the money. Let’s just say – Byrnes appeared to be having a lot of fun!

Kyle and Samantha Busch welcomed their new edition to their family late Monday night. Busch posted this photo of the two loving their new son Braxton, telling everyone how great mom and baby were doing. We think this is absolutely adorable!

Daniel Suarez had a unique opportunity with the Chicagoland Speedway on Monday afternoon. Suarez spent some time at the 1.5-mile oval and at the area schools promoting the race with students. It’s safe to say – these kids appeared to be having a great time!

For those of us who owns an iPhone – we like to mess with some of the features that comes with it. If you have a new enough iPhone, you have the feature called “panoramic” that captures wide photos. NASCARCasm, as clever as he is, had a lot of fun with that feature at Charlotte. This has to be one of the funniest tweets we have ever selected for Tweet ‘N’ Greet!