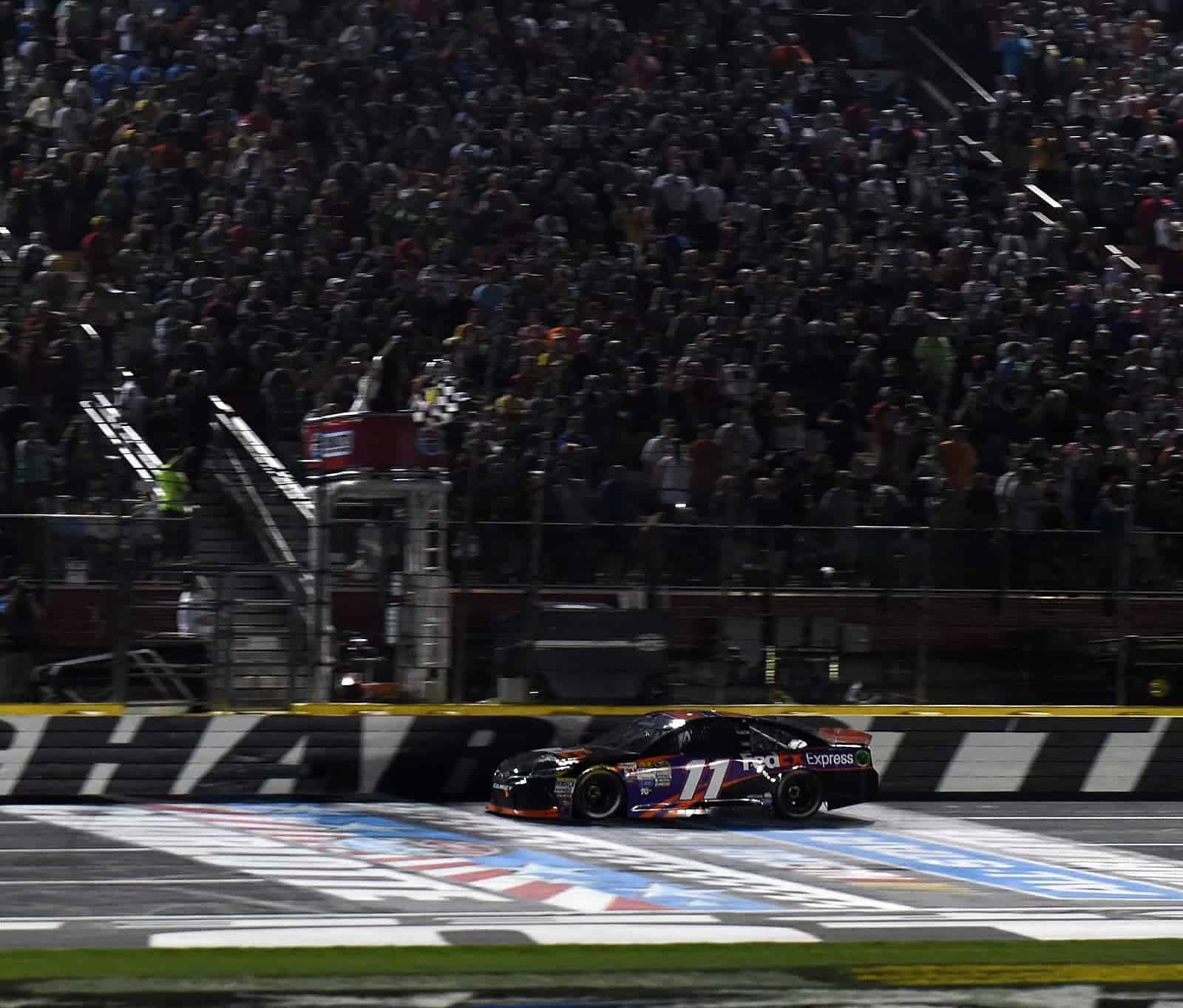 Yes, it’s true, Denny Hamlin did win the All-Star Race Saturday night, and sure, his car was good enough to stay out front, but the real heroes for Hamlin and his Joe Gibbs Racing car were the members of the pit crew. First, the crew’s role in the unique qualifying format for this event allowed Hamlin to win the pole for the All-Star Race. That doesn’t always necessarily guarantee success in a race. However, when it came down to see who would start first in the final 10-lap segment and dash to the finish, Hamlin’s crew got the No. 11 Toyota out first again. That was partially helped by the fact that being in the first pit stall gives that driver just a slight advantage when racing to the line to determine who is first off pit road.

Every race fan loves a good finish, and while you have to feel a bit bad for Erik Jones and his Camping World Truck Series team, what happened Friday night looked like the finish that was in the opening part of the movie Cars a few years ago (only involving two vehicles this time not three). Jones appeared to have the race in hand with a little more than a half-second lead over Kasey Kahne. Then a caution with two laps to go changed everything. It left Jones and Kahne racing door-to-door for the final two laps around Charlotte Motor Speedway. It was one of those finishes where by the naked eye, you couldn’t be sure who won. The margin of victory was .0005, tied for the closest in series history, with Kahne getting the win.

Whether you are a Kyle Busch fan or hater, or somewhere in between, you have to admit that it was good to see him back in the No. 18 car this past weekend. Busch, who suffered broken bones to both lower leg areas in the season-opening NXS race at Daytona, didn’t lead any laps but did manage to finish sixth. What should be noted about Busch, and it is a shame that his example was needed for this to happen, is that his accident has caused more tracks to install more SAFER barriers. And if you remember the hit he took on that inside wall at Daytona, he’s quite lucky to be around to see the benefits of those SAFER barrier installations.

One of the things the all-star race can do is give us just a little bit of a preview of who might be good in the 600-miler next Sunday. That means you have to look at Kevin Harvick (though he didn’t actually lead a lap he was pretty good), Brad Keselowski, Kurt Busch and Kahne as some of the favorites for Sunday night’s race. But remember, too, that 600 miles is a lot more then what was run Saturday night. A lot can change during that long of a race, so while the above mentioned drivers had their bright moments this week, that doesn’t guarantee them success this week.

Nearly every all-star event has at least some type of fan vote participation, allowing the fans to see their favorite athletes in action. That’s no exception in NASCAR and on the surface it seems like a good idea. However, in the other sports when an undeserving player is elected by a fan vote, it’s usually because the player has been great in the past, but is now past his or her prime. It’s not necessarily fair to the young and upcoming stars, but it is at least understandable. In NASCAR’s case, with Dale Earnhardt Jr. already in the All-Star Race, it was no surprise that Danica Patrick won the fan vote to make it to Saturday’s event. While Patrick has shown some improvement this season, she still has yet to a win a NASCAR race. She is to be commended for being a great ambassador for the sport and more recently understanding how she is a role model to young girls and women. She appreciates her fans and they appreciate her as the all-star voting showed. I do happen to like her and hope that someday, somehow, she wins a race simply because many have said she will not. But when it comes to on-track performance up to now, she has been nowhere near an all-star.

Just for a second, I’m dabbling in the IndyCar world here. The fact that there was a situation where drivers at Indy were spinning then getting airborne and upside down was just wrong all the way around. The fact that that IndyCar officials admitted they didn’t test the aero kits extensively on the oval before approving them to go in excess of 230 mph is a big problem. Luckily, the three drivers who experienced that uneasy flying feeling last week were uninjured. And luckily, the series changed its rules to help prevent such a thing happening in the race this week. If they had not changed it, it had tragedy written all over it. Let’s hope the changes prevent those cars from betting airborne in the midst of traffic during Sunday’s race. (Editor’s Note: this column was written previous to a practice crash by James Hinchcliffe on Monday)

The sport doesn’t seem to make a difference, but however leagues or associations try to dress up an all-star event, they still seem to lack luster. That was no more apparent than Saturday night when a photo showed to fans dozing off during the NASCAR event at Charlotte. We are such a results-oriented society that when we are told something doesn’t matter in the full scale of the season, well, it’s just hard to have a sustained interest in it, regardless of all the bell whistles that come with it.