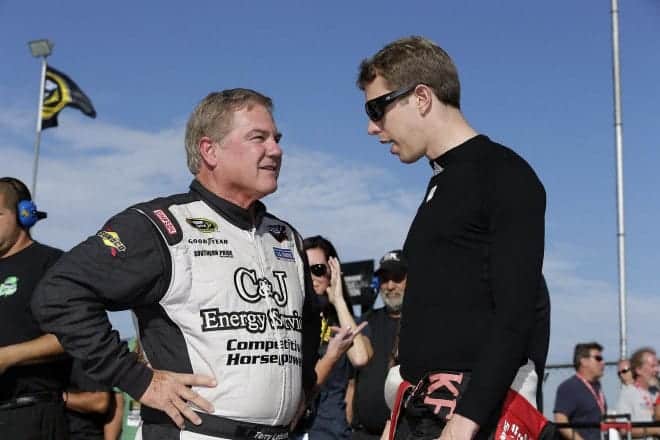 20 were nominated, but only five were selected for Charlotte’s NASCAR Hall of Fame. O. Bruton Smith, Terry Labonte, Curtis Turner, Jerry Cook and Bobby Isaac were all announced as inductees into the sport’s Class of 2016 Wednesday, scheduled for induction on January 22 of next year. Each were chosen following an afternoon of debate and a vote held by nearly 60 industry stakeholders, including media members, reigning Sprint Cup champion Kevin Harvick, and an aggregated fan vote.

Here’s a closer look at the five men selected for the sport’s highest honor….

“When I found out that I was nominated, I realized how much this meant to my family and the 15,000 employees that work for my companies,” said Smith Wednesday night in a statement. “Now, I realize how much it means to me. It will truly be an honor to be remembered at the Hall of Fame along with people like Dale Earnhardt, Richard Petty, Glen Wood, Junior Johnson, Darrell Waltrip and so many others who helped build this sport. That’s what I’ve tried to do my entire life. I want fans to know we’re always working to build the best facilities for them and that’s who I really owe this recognition to. The millions of fans who’ve attended our racetracks all of these years are the ones who really deserve to be in the Hall of Fame.”

Terry Labonte, a two-time Cup Series champion, began his career at NASCAR’s highest level in 1978. In a career that spanned 36 years, Labonte won 22 times. His two championships were earned racing for two different owners: Billy Hagan and Rick Hendrick. Earned 12 years apart, in 1984 and ’96 he owns the distinction of the longest period of time in between Cup Series titles. Labonte, who held the title of NASCAR’s “Iron Man” until 2002 with a streak of 655 consecutive Cup starts, retired at the end of 2014. In 1998, he was named one of NASCAR’s 50 Greatest drivers, known for his strength on the sport’s most challenging tracks. It’s only fitting that both his first (1980) and last (2003) win came in Darlington’s Southern 500.

“Obviously, this is a really proud day for the Labonte family,” said brother Bobby, the 2000 Cup Series champion after Terry’s selection was announced. “I think back to when we were kids racing quarter midgets, and I always just wanted to do what Terry was doing and be like him. He kind of blazed the trail as he advanced through different series, and I was fortunate to follow in his footsteps. I never would’ve thought way back then that we’d both grow up to be Sprint Cup champions and now one of us is in the NASCAR Hall of Fame. It’s a pretty special day.”

Curtis Turner, another of NASCAR’s 50 Greatest Drivers, is known for a number of on-track accomplishments. He won back-to-back races starting from the pole and leading every lap, a feat that has yet to be replicated since (nearly 60 years).  He had a 48% winning percentage in the NASCAR Convertible Division, earning him the nickname the “Babe Ruth of NASCAR.” One of the sport’s early stars, Turner’s aggressive personality worked against him with Big Bill France; he was banned from the sport for a time after attempting to start a driver’s union. Turner, whose last Cup race was in 1968 was tragically killed in a plane crash in 1970.

If Petty is the King of Sprint Cup, Jerry Cook should have the same title in the modifieds. Cook earned over 300 victories and six championships in NASCAR’s modified series, all while racing against rival and fellow Hall inductee Richie Evans. Following his racing career, which peaked in the mid-1970s and lasted through 1982, he was tapped to serve as the Whelen Modified Series director when it began in 1985. He, too was one of NASCAR’s 50 Greatest Drivers.

Bobby Isaac, driver of the bright orange, winged Dodge Daytona of the 1970 season, earned 37 wins during his career. With Isaac, speed was his forte. He earned 49 career poles, including a whopping 19 in 1969, which is more than most drivers have in their entire career. The 1970 Cup champion, Isaac wasn’t content to just make the NASCAR record books; he set 28 speed records in the Bonneville Salt Flats the year after his championship. Isaac is the fourth inductee this year who was named one of NASCAR’s 50 Greatest Drivers.

NASCAR also awarded the Landmark Award for Outstanding Contributions for NASCAR during the ceremony. The honor went to Harold Brasington, who built Darlington Speedway and North Carolina Motor Speedway. Darlington hosted NASCAR’s first 500-mile event and will return to its traditional Labor Day race weekend this year for the first time since 2003.

The sport was quick to praise the newest Hall of Fame members.

Congrats to those who were voted in. What an amazing honor. Deserving for sure. @NASCARHall 2016 https://t.co/NVMqoOO4Yu

Fun day @NASCARHall voting on the next group! Had 4 of the 5 on my ballot but everyone on the ballot was deserving!! #greatexperience

Others like Mark Martin were gracious, congratulating the five inductees while recognizing their time will likely come within the next few seasons. The 15 finalists who did not make the cut will almost certainly make their way onto the ballot again next year.

While I agree with bobby Isaac and Curtis Turner, I don’t agree with Terry Labonte and Bruton Smith. They are Hall of Fame worthy, but not yet. Red Byron, the first NASCAR Champion in two divisions should have been picked over Labonte, and Raymond Parks, Byron’s car owner, should have been in long ago. If you know anything about the early days, both Parks and Byron were there from the very start, and if it wasn’t for Parks loaning Bill France some money to keep NASCAR going, the sport would not have made it passed 1951. Maybe next year, Red Vogt, who built the cars for Parks and Byron, will get nominated and all three, Vogt, Parks, and Byron, will get in together.

As for Jerry Cook, that one was Ok. However, maybe Benny Parsons should have been voted in over him. Oh well, at least they didn’t pick a NASCAR team owner with a past that has big black marks attached, and I’m not talking about skid marks.,