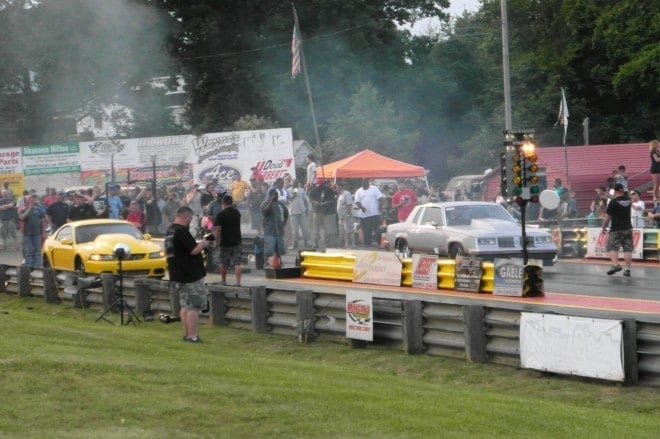 Nitro Shots: Can’t We Work This Out?

I know I have covered the Street Outlaws ground before, but I have one more good point to make. My example might not be strictly NHRA; however, I think it still applies. Once again, the NHRA’s stance toward the show is completely understandable. Street racing, even if it is understood to be a staged portrayal, is against the mission the NHRA was founded upon. The reaction to visible NHRA logos and known NHRA drivers appearing on the show, particularly as those drivers frequently took a stance of wanting to depart from the track and join the Street Outlaws because they are having fun, is understandable. All that being said, they surely could have gotten the message across and spoken out in a way that was less of a PR nightmare, made them seem like less of a bully, and most importantly, didn’t alienate potential fans.

Last weekend I went to the local track, Mooresville Dragway, for the Holcomb Motorsports Spring Nationals. In addition to the great racing, two of the cars and drivers from the show, BoostedGT and The Cutty, were in attendance on Saturday and made a few passes down the track. Drivers from the show have been making appearances at local tracks all over the place. There was a good crowd in Mooresville and while it’s hard to say if it was a result of the event, nice weather, or the appearances, you’d have to think at least some of the audience turned out to see those guys. They certainly generated excitement.

Here’s a better approach to this situation I’d suggest to the NHRA. First, we were at a track, not on a street. Use that opportunity to say to fans hey, the show is cool and all. We’re glad you like the racing and the cars and the personalities, but look, they play well at the track too. If you want to be like them, feel free, but you can do it here and have just as much fun. They are! If you really like the idea of making a car perform on a street surface instead of a track surface, look for a No Prep race, where the surface is more like a street.

There were plenty of examples on hand to make the argument about the similarities work. Look around. Look at the cars that are showing up at the track; they’re just like the cars on the show. Maybe the Nitro cars don’t fit that description but the NHRA has cars like those in their Sportsman classes, too.

There were 2.3 million viewers for the Street Outlaws season five premiere on Monday night. I don’t condone street racing either, but at the same time, motorsports could use a little bit of a positive boost. All of the other sanctioning bodies have stayed notably quiet on the subject. Compare that to the tracks and promoters, many of whom have been hosting these guys at their events. These personnel have absolutely decided to cash in and grow their sport off the buzz that has been generated. There has got to be a way to turn the negative into a positive in this situation for the NHRA without selling its soul.

Driver of the Week: Del Worsham

1991 – Won NHRA Rookie of the Year; youngest driver to ever win a Funny Car event at 21 years old

Some Things Most People Don’t Know About Del: Del has twin daughters, Katelyn and Madelyn, who are running Junior Dragsters. The girls opted to compete in different classes this year to avoid competing against each other. One stayed in the same class as last year and the other moved up to the next age bracket. Although they are the same age, competitors can opt to remain in the same class or move up if they will age into the next class during the season.

Del also loves going out on his boat, his way to unwind after a long racing weekend. And finally, Del has a 10,000-horsepower margarita machine powered by one of the engines from his Funny Car. He doesn’t bring it to the track on a regular basis as he used to, mostly for liability reasons in an open pit area, but he still brings it out for special occasions. Del talks about this margarita maker in this video clip.

This Sunday is the biggest racing day of the year. If you play your cards right, you can watch racing all day, beginning with the Formula 1 Monaco Grand Prix in the morning, moving on to the Indy 500 for the afternoon, then on to NASCAR’s Coca-Cola 600 after dinner. But above all else, don’t forget to include NHRA in your race day! The NHRA Kansas Nationals from Heartland Park Topeka is on tap this Sunday and the broadcast will make the perfect closer to cap off your day!

A writer for Frontstretch since 2002, and editor since 2006, Toni heads up the NHRA coverage for the site. She’s responsible for post-race coverage in the weekly Pace Laps multi-series round-up along with the weekly Nitro Shots column featuring news and features from the NHRA Mello Yello Drag Racing Series. An award-winning former writer for the Presbyterian Church, Toni works in web design and freelances with writing in North Carolina.
Previous Truckin’ Thursdays: James Buescher – From Champ to Sitting on the Sidelines
Next Eyes on Xfinity: Erik Jones Outrunning His Peers 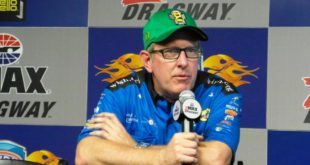