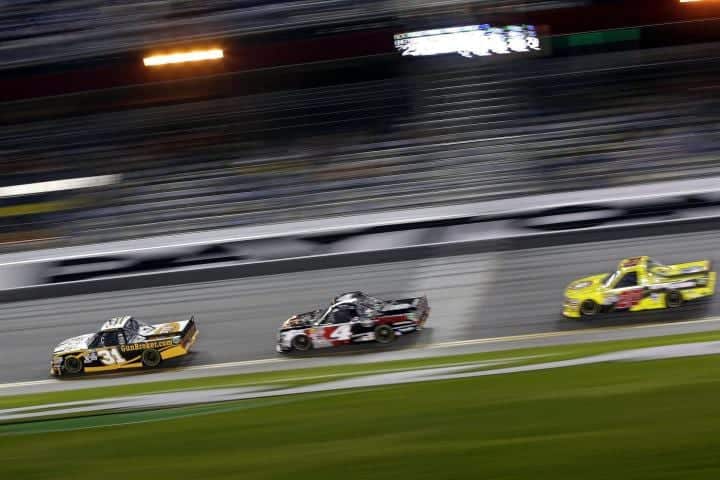 Following the 2013 season, James Buescher made the move from NASCAR’s Camping World Truck Series in what seemed liked a natural step. Taking a full-time NXS ride, hopes were high that the 23-year-old would keep pushing his career to the next level. After all, the youngster had already won the 2012 Truck championship; what more was there for him to do in the series?

No one would have thought a step up would lead to an outright stall. But following a season with RAB Racing that was mediocre at best (Buescher scored just two top 10s in 33 races) the organization moved the majority of its focus to the Sprint Cup Series for 2015. Sponsor Rheem jumped ship, aligning with Richard Childress Racing, and suddenly Buescher was left looking for a ride.

When any big promotion fails, sometimes the best road back to rebuilding your potential is to step back to the series that gave you success. Enter NTS Motorsports, a middle-tier team capable of taking Buescher back to a place he could surely rebuild: the Truck Series. In early February, the organization announced Buescher would pilot one of the team’s two full-time entries “for select races.” Translation: a part-time schedule. That’s not a surprise given that sponsorship in the Truck Series can be hard to come by; a team could easily go broke trying to fund a full season out of pocket.

But not long after the driver lineup for NTS was announced, GunBroker.com sent out its own release stating the auction website had partnered with Buescher for five events, including last weekend’s race at Charlotte. The partnership offered hope, a kickstarter for this former champion to find full funding over the course of the year. NTS seemed like his ticket back to NASCAR relevance, the right fit with father-in-law Steve Turner now out of the sport and embroiled in a lawsuit with former partner Harry Scott.

Sadly, that dream hasn’t become reality; instead of inking a deal, Buescher’s been all but invisible. Last Wednesday night, the former champ tweeted that he would not be racing at Charlotte, his second straight start sitting on the bench with the NTS program.

Say what? For the second week in a row, Buescher had been entered to pilot the No. 31 Chevrolet for NTS, only to be replaced late in the week by Scott Lagasse Jr. Now with Kansas, it wasn’t much of a surprise, given that the schedule Buescher had signed up for hinged on sponsorship. But Charlotte was the big question mark. Did GunBroker.com change its mind? Did NTS make the change instead? What exactly had happened in the last three months to keep Buescher out of the No. 31 truck?

Well, a general statement released by Buescher the next day did nothing but raise even more questions.

“I want to thank all my fans for continuing to stick behind me. I was looking forward to getting behind the wheel of the No. 31 NTS Motorsports Chevy but unfortunately plans changed,” Buescher said in a statement. “I want to thank Bob Newberry and everyone at NTS Motorsports for giving me an opportunity early this season; we had a great run going and I was looking forward to seeing how it was going to turn out.

“At this point, I’m not sure when I’ll be back at the track but when I do return I look forward to being a threat to win every single time out.”

Now, I’m not certain what plans may have changed, given that GunBroker.com was listed on the entry list and did, in fact, appear on the No. 31 Chevrolet at Charlotte. NTS owner Bob Newberry talked about it following the series’ final practice last Thursday night, claiming Buescher was still part of the team.

“It’s not a departure,” Newberry said. “When we started the season off, we knew that James was going to be a part-time situation. And then there for a little bit, it was looking real exciting, looking like it was going to be a full-time scenario. He’s still going to be in the truck. James will be back in the No. 31 this season. He’s doing a great job for us and he and I, we stayed in contact all week long. Literally all through last night we were still trying to get the deal done and I’d have brought a third truck here if I had to, just to get him in here and run because I think he’s an asset for the team and everything.

“I care about James a lot and know he cares about us, so we’re doing our best. We’re working our tails off as well as he is to get him back in the seat.”

Based on Newberry’s statements, it appears the decision may have hinged on GunBroker.com, but that raises an even bigger question as to why. Could it be because of the 17th-place run at Daytona, an event where Buescher finished 15 laps down? He was involved in a mid-race crash with nearly half of the field, but that’s hardly a reason to not back a driver, especially when it happens at a place like Daytona where luck is just as important as talent. Could the other driver (Lagasse) have come out as more marketable? Is there something fishy going on behind the scenes that Buescher and NTS don’t want to reveal at this point? Or did Lagasse bring extra cash, a much-needed financial boost that earned him the ride there over all other candidates? As of press time, requests for comment from the company had not been answered, so we’re left with several unanswered questions.

With all of that said, is it safe to say you can expect Buescher back behind the wheel at some point this season? If you’re to believe what the Newberry says, the simple answer is yes, and even Buescher reiterated on Twitter that he hadn’t left the organization. GunBroker.com does have three other races that are expected to back Buescher (Bristol, Las Vegas and Homestead-Miami), although at this point you’d have to take that “agreement” with a grain of salt.

Perhaps the bigger question surrounding the whole situation is what does it say about the health of the series when a past champion can’t even maintain  backing for his part-time schedule? Sadly, it’s nothing new in the Truck Series. Just ask Johnny Benson… or Todd Bodine… or Mike Skinner… or Ron Hornaday Jr. Now, compared to Buescher, those four aging drivers could be considered past their prime. However, each one proved that he still belonged on track, posting solid results and competing for wins on a regular basis.

As with most competitive sports, it all comes down to money. According to a Feb. 2013 story in the Florida Times Union, it costs nearly $2.5 million to be competitive in the Truck Series, and there’s no doubt that cost has risen with the addition of a dirt-track spectacular and a road-course race. That’s hardly chump change, even for a large corporation, and given the dismal Truck Series purses each week, it’s almost not even worth trying to race if there isn’t a sponsor willing to foot the bill.

That leaves Buescher on the verge of being “washed up,” a 20-something casualty of a series where talent takes third priority to sponsorship and a team’s long-term survival. Meanwhile, there have been rumblings for a few years now that the Truck Series could end up on the chopping block as its entry list slowly disintegrates. Among the teams to leave in recent years have been Kevin Harvick Inc., Turner Scott Motorsports, Germain Racing, Bill Davis Racing, Billy Ballew Motorsports… the list goes on and on. Today, you’ve got right around 10 organizations running the full schedule, fielding multiple vehicles while there are a handful of single-car teams just trying to survive.

When all is said and done, NASCAR is really pricing itself out of business. Sure, you’ll always have the big name sponsors (Lowe’s, Home Depot, Shell, Budweiser, etc.) that will come and back a driver with a proven track record and years of experience. Unfortunately, all of that doesn’t trickle down to the Truck Series nearly as often as it should.

It remains to be seen if we’ll actually see Buescher back on track again this season, but it’s the fact we’re even debating his presence that’s the problem. If the sanctioning body doesn’t step in soon and work to cut costs, allowing the smaller teams to stay afloat the series that easily puts on the best racing week after week will end up being just a distant memory along with Buescher. That’s not exactly the story I want to see written in NASCAR’s history books.

Let’s see if the sport, NTS, and Buescher can start writing a different chapter. But for now, the 2012 champion will have to wait another year to pursue the big trophy, left on the sidelines so soon after being one of the sport’s brightest young stars.

The demiise of the truck series is inevitble. It was flawed from the very beginning, a sop to Toyota to help them sell trucks.

I’ve always believed that overall Toyota did NASCAR more harm than good, chasing away a number of fans without bringing many (any) in. Do you believe the Cup World Toyota Series has had any measurable effect on Tundra sales?

Has Toyota hurt Nascar? I doubt it.Did some people not want to watch them “furren” cars race? probably. But I think that was insignifigant compared to the other problems facing Nascar.
Its hard to say whether Toyota benefited from Nascar or not. Sales figures are available on Wikipedia and show they are today only slightly above what they were when Toyota entered Nascar.
But does racing improve sales today? I think you could use Dodge as a gauge for that. They are much more profitable since leaving Nascar then they were before. Although that is primarily Jeep and Ram truck driven.
IMHO Toyota is in Nascar just to be seen as a part of Americana, and they can afford it,not because they think anybodies going to buy a Camry or a Tundra because of it.

I hate the truck series is having these troubles. It often puts on the best racing of the weekend. I so would have loved to have seen the Cup drivers race the trucks for the All Star show. Would’ve been better aero-wise and would have been good cross promotion.