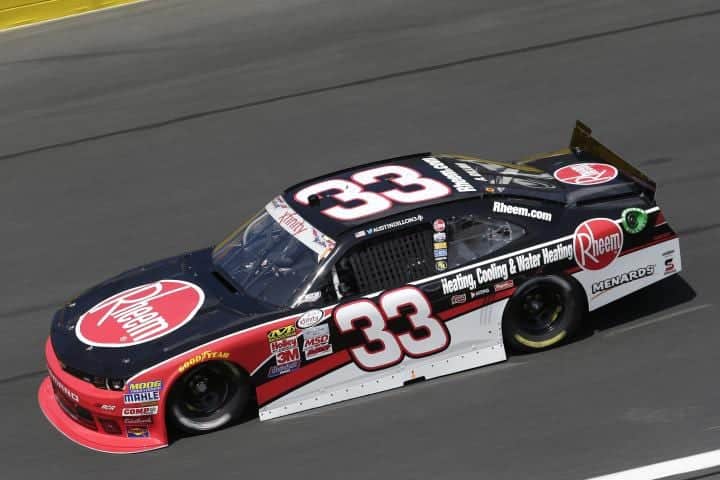 The first session was led by Darrell Wallace Jr. with a speed of 183.968 mph. Erik Jones, Kasey Kahne, Dillon and Kevin Harvick were among the top five. Both Wallace and Jones had to set their quick times relatively late in the first round due to being late getting through technical inspection.

The first session was red flagged twice. The first red flag was for Chad Boat‘s spin off turn 4 into the quad-oval grass. The incident was his second spin of the weekend, the first spin coming on Thursday afternoon. The one lap he completed was good enough to qualify 28th for the race, but the car was heavily damaged. At the present time, Billy Boat Motorsports is attempting to repair the No. 84, which had already been sent back to the shop for similar repairs after the Thursday spin.

The session was slowed again for Eric McClure‘s side window blowing out of his No. 24 Hefty/Reynolds Wrap Toyota on the backstretch. McClure will start the race from the 37th position with a provisional. Derrike Cope and Mike Harmon failed to make the field.

The Dillons were 1-2 in the second session, with Ty over Austin. Kahne, Jones and Wallace Jr. were again in the top five.

Harvick, Iowa winner Chris Buescher and Chase Elliott failed to make the top 12 and will start 13th, 14th and 16th respectively. Jeremy Clements, who bumped his way into the top 24 in the final seconds of round 1, qualified 24th in round 2.

The final round was won by Austin Dillon, who will go for his second win of this season later this afternoon. Wallace Jr. will start second, Brian Scott third, Denny Hamlin in the No. 54 qualified fourth and last year’s Charlotte race winner Kyle Larson qualified fifth.

Aric Almirola in the No. 98 qualified sixth, in front of Jones, Kahne, Ty Dillon and Ryan Reed. Elliott Sadler and Ryan Blaney qualified 11th and 12th.