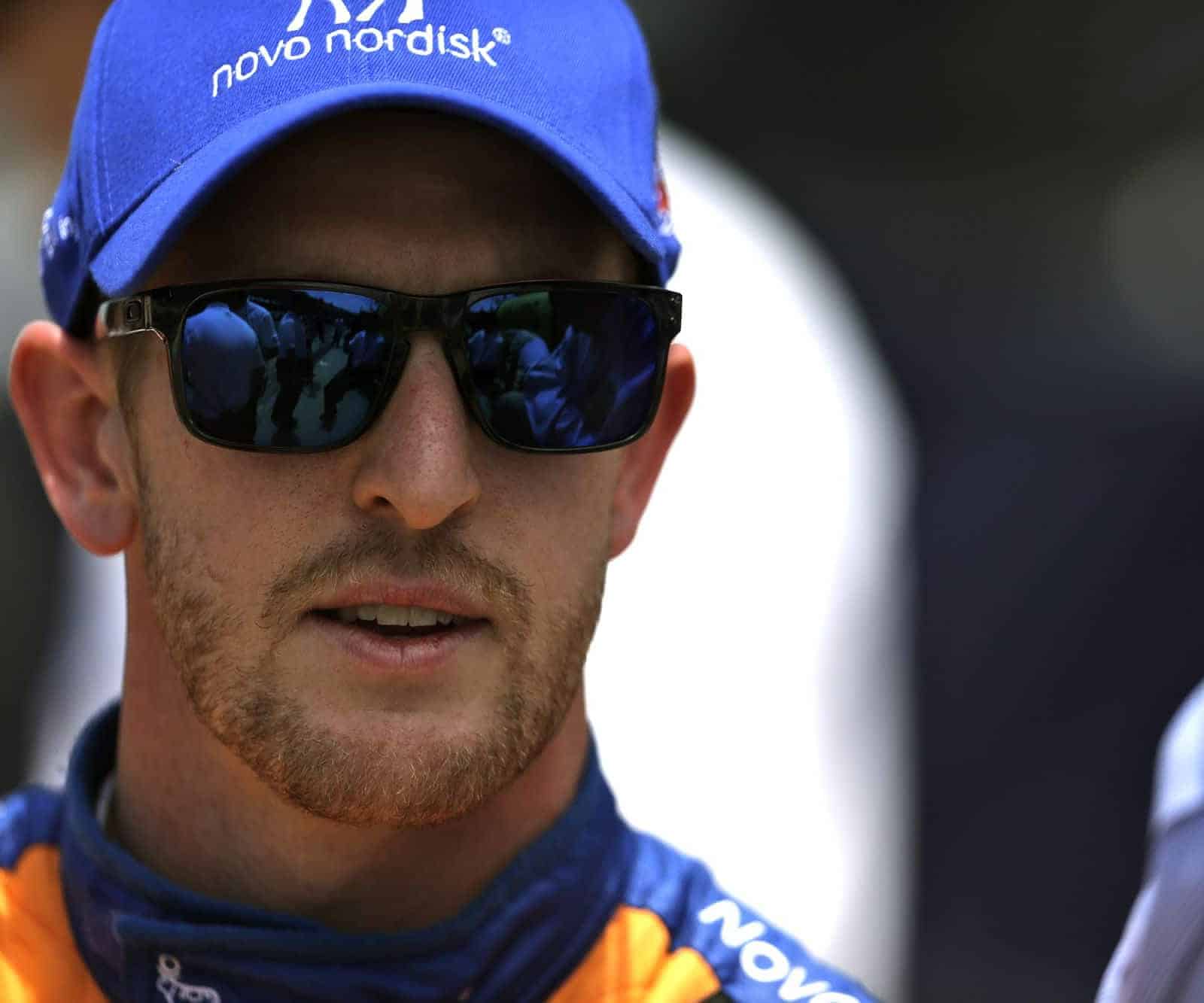 IndyCar: Charlie Kimball Shows His Worth – Going into the 99th Indianapolis 500, all eyes were on Team Penske and Chip Ganassi Racing (CGR) to compete for the win. While Penske ultimately got the upper hand in the battle, one CGR driver came out smiling.

Charlie Kimball entered Sunday’s running of “The Greatest Spectacle in Racing” with an average finish of 15.25 at Indianapolis Motor Speedway, and flew under the radar throughout the month of May as his teammates stole the show.

Scott Dixon entered as the favorite for CGR after taking the pole. Tony Kanaan entered as the 2013 champion, and Sage Karam was considered a darkhorse after surprising the world to finish ninth as a rookie in the 2014 Indy 500.

Yet somehow, when the checkered flag fell, it was the 30-year-old Kimball the led CGR with a third-place finish.

The surprising podium finish highlighted an impressive month of May for Kimball. After finishing no better than 12th in the first four races of 2015, the Californian brought home finishes of fifth and second in the two races at Grand Prix of Indianapolis and Indy 500.

Kimball’s 2015 campaign got off to a rough start, but a trip to Indianapolis has him looking like a contender. His 11.7 average finish is the second best of his career, and he currently sits a career-high eighth in points.

Kimball might not be CGR’s best driver, but at the track that matters most on the Verizon IndyCar Series circuit, he shined the brightest. – Aaron Bearden

NHRA: Long Day’s Journey Into Night – Persistent showers plagued the NHRA Kansas Nationals from Heartland Park Topeka, but the NHRA kept after it and managed to get the entire event in. The first round of eliminations was delayed briefly for light sprinkles, a trend that would continue throughout the day, including one lengthier period of steadier rain, and while the Nitro categories finished up a little earlier, it was after 8:30 p.m. local time before the Pro Stock finals completed the Mello Yello Series classes.

It was worth the wait for Don Schumacher Racing as the organization scored their 250th Mello Yello Series win thanks to Funny Car driver Jack Beckman. DSR is the winningest team in NHRA drag racing. Beckman defeated John Force with a pass of 3.982 seconds at 316.45 mph to Force’s 4.002 seconds, 324.51 mph. Beckman also became the first Funny Car driver to record four consecutive runs under four seconds, running in the 3-second range in the last two rounds of qualifying and the first two elimination rounds. He was one of a handful of drivers to run in the 3-second range on what would prove to be a fast track in spite of the weather delays. Beckman defeated Courtney Force, John Hale and Del Worsham en route to the finals.

Richie Crampton scored his second victory of the year in Top Fuel, the fourth of his career for the second-year driver, by beating Larry Dixon with a run of 3.738 seconds, 318.09 mph to Dixon’s 3.787 seconds, 308.28 mph. Crampton ran by Kyle Wurtzel, Spencer Massey and Brittany Force before facing off against Dixon for the Wally.

The Nitro classes were long over by the time Pro Stock finally wrapped up the day and Erica Enders collected her third Wally of the season. The defending Pro Stock world champion faced off against Greg Anderson in the finals, posting a stout 6.584 second, 209.33 mph run to Anderson’s 6.591 seconds, 209.14 mph. She also defeated Mark Hogan, Jonathan Gray and Larry Morgan to get to the finals. Enders was fast all weekend, setting new track records for elapsed time and speed of 6.515 seconds, 211.43 mph in qualifying on Friday. – Toni Montgomery

Xfinity Series: Cup Dominance Doesn’t Stop Title Chase – Austin Dillon dominated the Hisense 300 at Charlotte on Saturday afternoon, leading 163 of the 200 laps en route to Victory Lane. The Richard Childress Racing driver nearly lost it at the end, but even if he did, it would have been another Cup Series regular heading to the winner’s circle.

The top three drivers were each Cup Series drivers, with Denny Hamlin and Kasey Kahne behind Dillon by the time the checkered flag flew. However, Regan Smith, who was the highest finishing Xfinity Series regular, was able to give them a somewhat run for the money at the end. And speaking of money, the Dash 4 Cash qualifiers were named after the race, which included Smith, rookies Darrell Wallace Jr. and Daniel Suarez, and Ty Dillon.

Chris Buescher struggled throughout the day, and never ran inside of the top 10 at Charlotte. Buescher’s struggles were shocking considering he was coming off a victory at Iowa, plus Wallace was competing for a spot in the top five throughout the day. Dillon shrank the championship gap to a mere four points, and enabled the top seven to get slightly closer to contending for a title. – Joseph Wolkin

Formula 1: Thank You Card –  Nico Rosberg somehow managed to win at Monaco on Sunday, even though he had languished behind in second place for the entire event, at one point being nineteen seconds back. But with Max Verstappen‘s ambitious move, the caution flew and everything about the race changed.  Mercedes brought Lewis Hamilton, the leader, in believing that they would still emerge in first – only to discover that Rosberg and Sebastian Vettel had passed him

With the restart, Rosberg was able to drive away as Hamilton grew frustrated trying to pass Vettel. The decision to have Hamilton pit will certainly be one that is discussed at Mercedes this week, however the flip-side is that Rosberg has now won at Monaco for the third time in a row – a rare feat. – Huston Ladner

Short Tracks: The Show Before the Show – Leading up to the Greatest Spectacle in Racing every year are some exciting events at short tracks all across the Hoosier State. On Saturday night, 11 rows of three competitors each took to the banked 1/4-mile asphalt oval of Anderson Speedway for the Little 500. This race, actually 500 laps in distance, featured some of the best non-winged sprint car pilots in the country, and it was Chris Windom who took the lead with less than 75 laps remaining to go on for his second career win in the event over Dave Steele.

Earlier in the day, an afternoon version of the annual Night Before the 500 took place at Lucas Oil Raceway at Indianapolis, less than an hour from the Indianapolis Motor Speedway. Californian Tanner Swanson dominated the feature race for the USAC Silver Crown open-wheel cars. A couple days prior, many of the same competitors took part in the Hoosier Hundred at the Indiana State Fairgrounds dirt surface. It was Tanner’s brother Kody Swanson that took the win on that night. – Aaron Creed

I have to believe the chief for Lewis Hamilton is feeling like a goat today. I can’t for the life of me understand why they would pit the car. While the racing itself was fairly dull, Hamilton’s gift to Rosberg was pretty unbelievable.

Not single post-race interview after the F1 race. I don’t get it.

Juan Pablo drove like a man would not be denied. He earned his win. As I suspected, the Indy 500 was the most exciting race of the day by a long shot.

As for the Coke 600, it’s nice to see JGR back in top form. While I’m not a big fan of any of their drivers, I was getting tired of the dominance by HMS and SHR. On. The flip side, it seems Ganassi’s NASCAR teams have returned to mediocrity.

As I understand the Hamilton pit call, he had about 20 seconds on Rosburg at the time of caution. Mercedes thought the new Virtual Safety Car rule meant that the field would be immediately be slowed to pace speed which would have given Hamilton plenty of time to pit and maintain the lead. Rosburg/Vettel didn’t slow and overtook Hamilton. I may be wrong but if not, this VSC rule needs some attention.

I imagine the most exciting part of the whole day was the Mercedes team debrief after Monaco. Imagine that it was a very loud “frank and open discussion”.