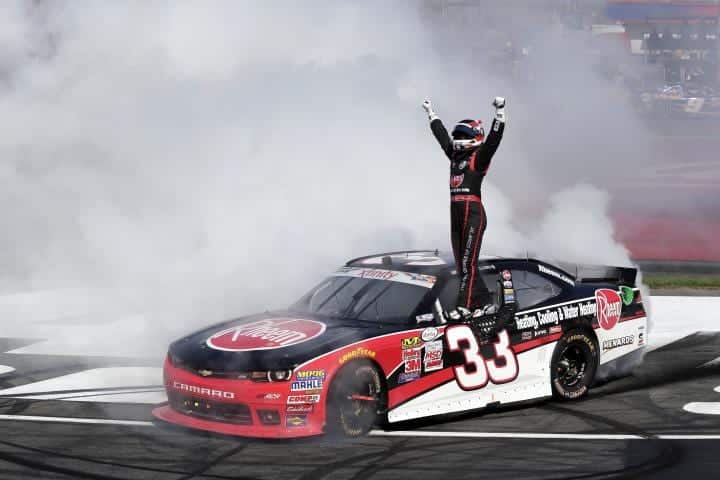 How good was Austin Dillon‘s car in Saturday’s Hisense 300? After the race, Dillon said he didn’t want to get out. He started the race on the pole and dominated from there, leading 163 of 200 laps and making a perfect driver rating of 150.0 en route to his victory.

Denny Hamlin tried to make a race of it, passing Dillon on a restart with 35 laps to go. Dillon bobbled just a little, allowing Kasey Kahne and Regan Smith to also squeeze. But Dillon was far from down and out. He passed Smith and Kahne within 10 laps and set sail for Hamlin, catching him with 16 to go, waging a door-to-door battle for the top spot. Dillon got by Hamlin, who tried to cross over, but Dillon slammed the door and from there, drove away to win by 2.693 seconds. Hamlin was second, followed by Kahne, Smith and Darrell Wallace Jr.

Daniel Suarez, Ty Dillon, Chase Elliott, Elliott Sadler and Ryan Blaney rounded out the top 10. 17 drivers finished on the lead lap and six failed to finish due to mechanical issues.

Austin Dillon had a great car on Saturday, and he used it to take the rest of the field, including several of his Sprint Cup peers, to school. Even when he lost the lead and the clean air that goes with it, Dillon was able to pass with seeming ease to force his way to the front. His pass for the win took things three-wide with a lapped car, but Dillon never even blinked. A race with a dominant driver and an exciting race for the win doesn’t always happen together, but Dillon made it happen this week.

Smith had the best result among his Xfinity Series peers on Saturday, finishing fourth and securing a spot in the series’ Dash for Cash program. Smith had a strong car late in the race, challenging teammate Kahne for position in the closing laps before winding up fourth.

Wallace Jr. had a fast car all weekend, beginning practice on Thursday. He started on the outside pole and was one of just seven drivers to lead a lap. Wallace is currently fourth in series points after scoring his fourth top 10 of 2015.

Smith, Wallace Jr., Suarez and Ty Dillon were the top-four NXS regulars in the finishing order, and will be spotlighted in the Series’ Dash for Cash program next week in Dover. The top finisher of the four will take a $100,000 bonus and qualify for the next round at Indianapolis along with the three top NXS regulars at Dover. The program puts the series regulars, who often take a backseat to the Sprint Cup regulars on race day, at the forefront and gives them a chance to compete for a little something extra. Should a driver win the first three bonus rounds and the race outright at Darlington, the fourth and final round, he’ll win a cool $1 million, too.

It definitely could have been a lot worse, but a blown right-rear tire was still a bitter pill to swallow for Gaughan. He was able to hang onto the car and escaped with minimal damage, but lost a lap making repairs and was never able to get it back. Gaughan said before the race that it’s much easier to lose points than to gain them back, and while he remains in 10th spot in driver points, he’s two races’ worth of points behind leader Buescher.

Kyle Larson was running inside the top five and looked like he was headed for a great finish, but a suspension issue reared its head just before the halfway point of the race. Larson’s team made quick repairs, but the damage was done and Larson lost 17 laps to Dillon en route to a 33rd-place finish.

John Wes Townley was having an uneventful race, running mid-pack before an alternator problem caused his car to lose power. His No. 25 team replaced the faulty alternator and got Townley back on track, nine laps in arrears. Townley went on to salvage a 29th-place day.

A detonating engine is never pretty, and when Jamie Dick‘s engine detonated, it was go big or go home. Dick spun in a plume of smoke and his No. 55 caught on fire. Safety crews quickly extinguished the flames, and Dick was unhurt in the incident. The oil on the track from the failure brought out an eight-lap caution for cleanup, but Dick’s day was over and the car suffered damage from the spin as well as the broken engine, an expensive fix for a small team.

The best of the NXS regulars finished fourth, and seven of the top-10 finishers were series regulars. That number is encouraging in that it could have been a lot worse, but the Sprint Cup domination that has plagued the series in recent years was alive and well in Charlotte, where they took the top-three finishing positions and led all but six of the 200 laps in the event. There was enough good racing among the regulars that they weren’t completely ignored on the broadcast, but it’s still hard to convince sponsors to take a chance on the future when they can have the stars of the present from a higher series.

Big teams rule the roost in NASCAR’s national touring divisions. Money buys speed, and that makes it hard for the smaller independent teams to take root. For Jeremy Clements‘s family-owned operation, his solid 13th-place finish on Saturday was testament to the team’s hard work in the series. Clements quietly kept his car out of trouble and on the lead lap, the ingredients for a strong day at the races.

A total of 10 drivers will for the 900-mile total at Charlotte this weekend. Cup regulars in the field on Saturday included Kahne, Austin Dillon, Larson, Hamlin, Kevin Harvick and Aric Almirola. Landon Cassill, Elliott, Blaney and JJ Yeley are all running for NXS points but are also racing in the Coca-Cola 600. Jeff Green and Gaughan were in the Saturday race and attempted but failed to qualify for the Cup race. Camping World Truck Series regulars who came out for the show included Erik Jones and Townley. The highest finishing double-duty driver was race winner Dillon.

Sometimes, you’ll have a race where one driver dominates. Such was the case on Saturday, but don’t be fooled by the result. There was plenty of good, hard racing to be had for position near the front of the field. Austin Dillon didn’t simply run away and hide when it counted, either. He had to race back from fourth after a bad restart with fewer than 35 laps to go. The first two spots were easy, while the last one, for the lead, was not. Dillon and Hamlin waged a fantastic battle for the lead. Would it have been better for the series if it had been two regulars? Sure, but the regulars did have their say and made some great moves of their own within the top 10.

When all is said and done, the race certainly won’t go down as an instant classic and won’t be one most people remember in five years, but it was a solid, decent race with some good action throughout. It was also the kind of race that many fans will complain about, because it didn’t end with a spectacular finish or feature door-banging and gouging. It was a middle-of-the road event, but a dominant driver when he’s as good as Dillon was Saturday is part of racing, and it’s not really bad for anything.

“I didn’t want to get out of this thing. This thing drove so good. It was a heck of a race there with Denny at the end and Kasey [Kahne]. I had to go right there in lapped traffic ; I knew if I didn’t hurry up and get in front of him right there, the tires might equalize [and lose grip].” – Austin Dillon, race winner

“The clean air here was a big deal, so that’s the first time I really felt it. That’s the first time I finished a top series race here, so that’s something to be proud of. Clean air is your best friend in these races, so we’ll build off of this. It’s a good top-five, a good momentum boost for our team. We needed this, so sixth, fifth, first sounds good for the next one.” – Darrell Wallace Jr., finished fifth.

“My car was better than a ninth-place car today. On long runs, my car would come to itself and we could really put down some fast times. However, everyone was running the same line, so it’s hard to run fast laps when the fastest lane is currently being used by the car in front of you. As a team, we are moving in the right direction. We are starting to understand the car better, which is greatly helping our race setups and mid-race changes. We’ll build off what we learned this weekend and go battle at Dover next week.” – Elliott Sadler, finished ninth

“We’re still leading. We didn’t lose that much, but I hate points racing to begin with. We’ll keep taking it and knowing that we expect to run top-five every week. If we do that, the points will fall just the way we need them to. That will be our plan is to step our game up at these places a little bit because at the short tracks we know we’ve got a really good Ford Mustang when we go back to those places.” – points leader Chris Buescher, finished 11th

Used to be mildly upset if I missed the Charlotte 300. Didn’t see a lap this year and don’t care.

Nobody does! Ten Cup drivers using the series for practice Zzzzzzzzzzzzzzz.