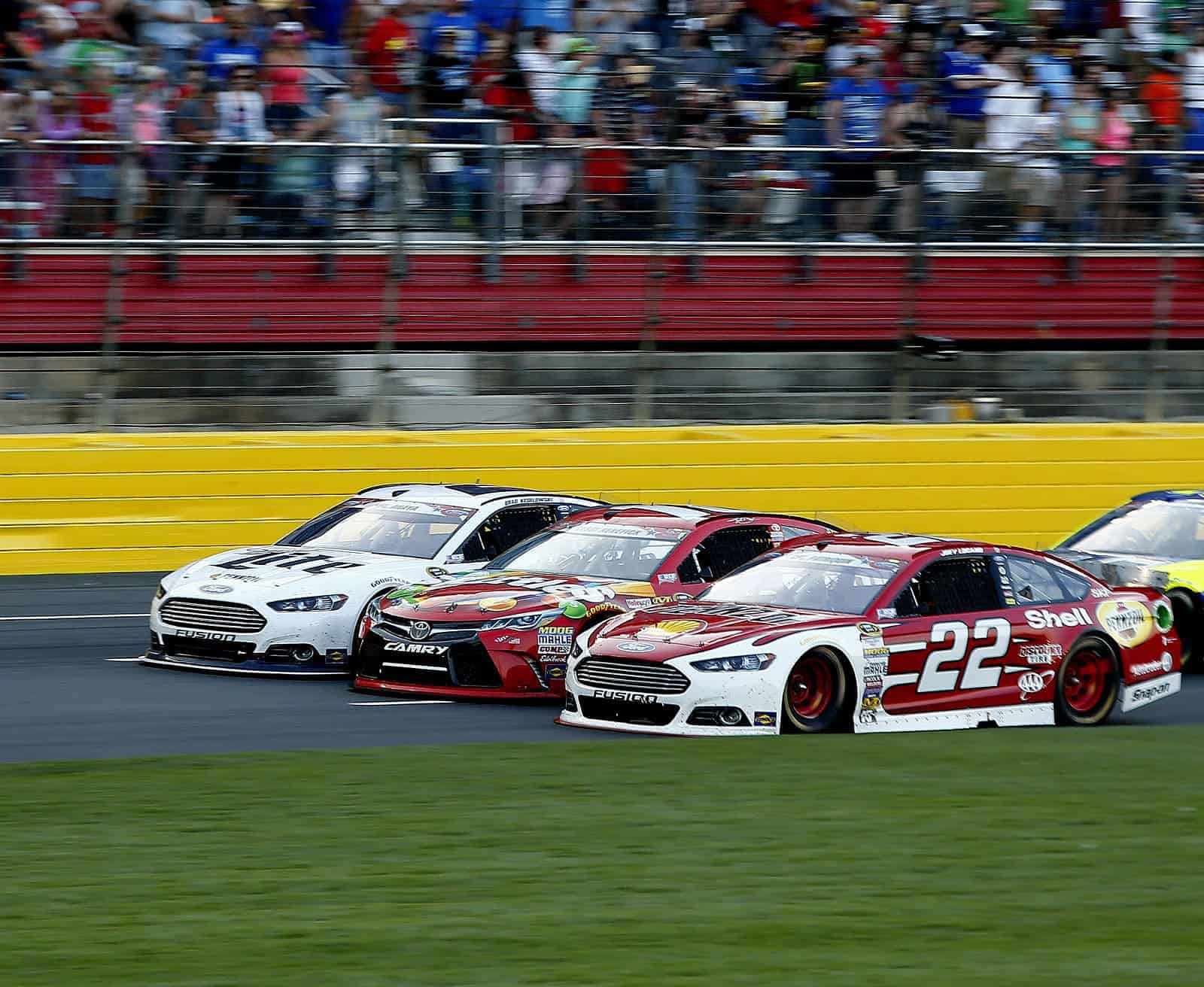 Anyone would forgive a driver if it took him a few races to get back into the swing of things after being sidelined for three months with a broken leg and a broken foot, especially since his first full-length race back in the driver’s seat was the longest of the year. But Kyle Busch never missed a beat on Sunday night, racing with the leaders all night long. He started 14th and raced as high as second before falling to 11th after pitting for fuel late in the race. The performance was vintage Busch, and with all three of his teammates in the Chase with wins, you can bet that Joe Gibbs Racing will throw the kitchen sink at Busch to help assure he makes the postseason Superfecta.

A day-night transition on a notoriously temperature-sensitive track made for a long night for some teams. Teams that ran well early dropped back as the track cooled and tightened up, and some who struggled early found their mojo as darkness descended.

The racing by day was as good as it gets on a 1.5-mile track, but once night fell, it was more typical intermediate track fare, where there was some great action on restarts but little else. While most fans seem to like night racing, the jury is out on why, because racing by day when the weather’s hot generally makes for a much better show. The series would do well to dial back the number of night races on the schedule, leaving this race, Bristol’s August event, and perhaps the Saturday Night Special At Daytona in July and scrapping the others.

Matt Kenseth took the pole on Thursday, and was hoping to duplicate his Bristol performance, where he rode the pole all the way to the win. Kenseth had an up-and-down night, leading three times for 26 laps but having to make an unscheduled stop late for a vibration. That may have helped him in the end when it all came down to fuel strategy. Kenseth wound up fourth, a sound finish to a night that could have gone very wrong.

Jimmie Johnson won the Coca-Cola 600 a year ago, and after he got sideways early for the third time in three races (one of which was Kansas, a race he went on to win), Johnson looked to find some of his magic, performing a spectacular save to keep the car off the wall and coming back to race into the top five with lap times that were faster than the leaders. It looked as though Johnson was a strong candidate for a repeat until he spun again on lap 274, this time slamming head-on into the inside wall. His team made repairs and got Johnson back on track. But the damage was done, and he finished a distant 40th, 30 laps behind.

Other than Johnson’s pair of spins and a few scrapes with the wall for a handful of others, things didn’t really go south in any big way. Quite the opposite, really, as the race was one of the better ones we’ve seen on a 1.5-mile track recently. No, it wasn’t perfect, and the daytime half was far racier, but it was probably the best race Charlotte has seen since repaving the track in 2006. As the pavement ages, the racing will only improve. Charlotte used to host some good races; it’s narrow and fast, trickier than some of its close cookie-cutter cousins. Returning the fall race to daytime would only serve to improve things further. Some will complain about the racing Sunday, but some will complain about any race, and this one was actually pretty good.

Why… did Carl Edwards win the race?

Because crew chief Darian Grubb apparently has a magic formula for calculating fuel mileage. Edwards should know; it was Grubb’s strategy that cost him the 2011 title when Grubb was calling the shots for Tony Stewart. This week, Edwards stretched a tank of fuel for more than 60 laps to find his way to Victory Lane. It’s the second time Grubb has turned fuel strategy into a win in NASCAR’s longest race; his 2007 win with Casey Mears was also a mileage gamble that paid off. With enough in the tank and clean air up front, Edwards cruised home for his first win with Joe Gibbs Racing, becoming the third driver to win for that organization this season.

Furniture Row Racing; Martin Truex Jr. (No. 78 Furniture Row Racing/Visser Precision Chevy): For the second points race in a row, Truex had the dominant car only to have luck on someone else’s side at the end. Truex finished fifth after leading 131 laps (most of any driver), but he should have won, and his disappointment was palpable after the race. His team has that look, though, that if they win one, they might reel off two or three once they get rolling.

Germain Racing; Casey Mears (No. 13 GEICO Military Chevy): What didn’t happen to Mears on Sunday? He said his team had found something in practice on Saturday, and though he started 34th, he was running 20th by lap 175. Mears had an issue early when he smelled smoke and the car lost power, but it turned out to be an issue with the driver’s cool box, which Mears was without for the rest of the night. To top it off, his spotter wasn’t feeling well, prompting a mid-race replacement with Justin Allgaier‘s spotter after Allgaier fell out of the race. A couple of brushes with the wall added to the team’s issues, and while they’re not satisfied with 23rd place, it could have been worse.

Bootie just told @CJMearsGang that since he's run this far without a/c tonight he will not get any @MonsterMile Casey laughed. A lot.

Tommy Baldwin Racing; Alex Bowman (No. 7 Culer Chevy): TBR has struggled at the 1.5-milers (as do most of these teams because of the cost of fine-tuning the cars), but Sunday night’s 26th-place finish was the team’s best on an intermediate track this season and a step in the right direction. A combination of strategy and solid pit work was a key for the team.

Huge shout out to our pit crew, great stops all night. The No. 7 @CULERbrand boys getting' it done on pit road. #NASCAR #CocaCola600

Front Row Motorsports; David Ragan & Cole Whitt & David Gilliland (No. 34 CSX Ford & No. 35 Speed Stick Ford & No. 38 Love’s Travel Stops Ford): Whitt’s 28th-place run was the best of the night for the team, but as they often do, all three FRM drivers finished within a few spots of each other, which shows that they’re on the same page and improving as an organization. Moffitt finished 31st and Gilliland 33rd despite a shock issue. Overall, it wasn’t a perfect night, but not a terrible one, either.

JTG-Daugherty Racing; AJ Allmendinger (No. 47 Scott Products Chevy): Almendinger struggled with his car almost all weekend. At one point, he called the No. 47 car “evil” as he fought the handing. The team also had an extended stop on pit road late in the race and ultimately finished five laps down. The good news, if there is any from his night, was that five laps down still translated into 29th place.

Leavine Family Racing; Michael McDowell (No 95 Thrivent Financial Ford): McDowell had some speed early on, running inside the top 30. That’s a solid performance for this part-time team.

HScott Motorsports; Michael Annett & Justin Allgaier (No. 46 Pilot Flying J Chevy & No. 51 Brandt Chevy): Both Allgaier and Annett had their issues on Sunday night. Allgaier tagged the wall on lap 135 and the team was unable to repair the damage and return to the track, winding up in 43rd place. That turned out to be a boon for the No. 13, as Allgaier’s spotter was able to fill in for Mears’s usual spotter, who wasn’t feeling well. It wasn’t so helpful to Allgaier, whose team tweeted a video recap of his day after he fell out. Annett went for a spin on lap 328, bringing out a caution. He was able to continue on to a 32nd-place finish. Annett had some very good finishes for Tommy Baldwin Racing last year but has struggled a bit this year as his team works to adjust to being a two-car operation.

BK Racing; JJ Yeley & Matt DiBenedetto (No. 23 Hope for Warriors Toyota & No. 83 Dustless Blasting Toyota): DiBenedetto has been a bright spot for this team several times this season, and while he struggled on Sunday, his 34th-place run was the best BK Racing result. Yeley lost his engine with just a handful of laps remaining, relegating him to 38th place. The team was unable to qualify with its third car and driver Jeb Burton.

Phil Parsons Racing; Josh Wise (No. 98 RoyalTeakCollection.com Ford): Wise and Co. fought an ill-handling car all the way to a 35th-place finish. On the up-side, Wise avoided trouble and brought his car home in one piece, something that’s truly important for a single-car operation without a large fleet of cars at its disposal.

Circle Sport; Alex Kennedy (No.33 HonorandRemember.org Chevy): Kennedy said before the race that his goal for his first visit to tracks like Charlotte was to log laps, finish the race, and learn. Kennedy had never raced at Charlotte in any series, so it was an adjustment for him. The No. 33 bunch took home a 36th-place finish, but Kennedy also takes home the experience that will help the team build for next time.

Hillman Smith Racing: Landon Cassill (No. 40 Snap Fitness Chevy): Cassill, who got out of the car and ran a half-marathon to downtown Charlotte after the race, was running in the top 30 as the laps ticked by until a broken axle sent him to the garage for repairs. Quick work by his team got Cassill back on track, and he finished 39th, not indicative of his race as a whole.

Wood Brothers Racing; Ryan Blaney (No 21 Motorcraft/Quick Lane Ford): Blaney’s 42nd-place finish does not tell the story of his race by any means. Blaney started 16th and had a top-20 car all night long, running in 11th by lap 175. Blaney was able to keep his car in the top 15 until he lost his engine with just over 100 laps to go. It was a very good run for the rookie driver on a track that’s not friendly to the smaller teams.