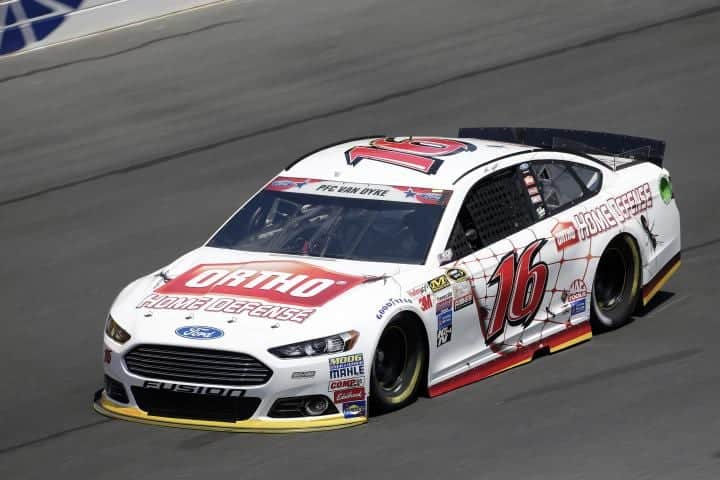 Eventual Coca-Cola 600 champ Carl Edwards really needed to win a race. He had just moved over to a brand new car at Joe Gibbs Racing from Roush Fenway Racing at the beginning of the 2015 NASCAR Sprint Cup Series season, giving him optimism for a new beginning in his career but also applying some pressure on his own shoulders to succeed with a championship-caliber race team. No one puts more pressure on Edwards than himself, but that challenge still existed. After 11 races, two of his three teammates had already been to Victory Lane and the third hadn’t even been in the car for any points race this season because to an injury (this teammate being Kyle Busch, who was in the car Sunday night for the first time in a points event all season). It was time for Edwards to step up and get to Victory Lane… which he did.

So it’s safe to say that there really wasn’t anyone in the field who wanted a win more than Edwards.

Except for maybe Greg Biffle.*

You see, Biffle used to be Edwards’s teammate at RFR, and the two of them had raced competitively together for many years. However, Edwards didn’t jump ship for no reason. RFR had been fading quickly, as none of their drivers have been to Victory Lane this season and with Biffle serving as their highest driver in points right now at a dismal and unimpressive 19th. Even last year, only Edwards made it to Victory Lane, winning twice. That’s a far cry from even as recently as 2012, where the organization won five races and had two of their drivers in the top 10 in points at the end of the year. You don’t have to go back much farther than that to see that RFR used to be a force to be reckoned with on a weekly basis.

This is especially true for Biffle, whose 19 career victories have recently seemed but a distant memory.

But on Sunday night, for a little while, it looked like Biffle might possibly earn his 20th career victory. He would just have to go through Edwards to do so.

Neither Edwards nor Biffle had the most dominant cars of the night. Both drivers had top-10 cars of course (a goal Biffle had established for the night), but it was fuel mileage that ultimately had them first and second in the closing laps of the race.

The difference was that Edwards had enough fuel to make it to the end of the race, while Biffle was questionable. As long as the race remained green to the end, however, Biffle was Edwards’s only threat. Biffle was right around one second behind Edwards with just a handful of laps to go while third-place driver Dale Earnhardt Jr. was barely within shouting distance (5-7 seconds back depending on which lap it was). The race had literally come down to just these two drivers.

At times, it looked as if Biffle may very well catch Edwards and make a run for the victory. The margin of victory seemed to be shrinking as the laps wound down. However, that last push would ultimately hurt Biffle.

“I got pretty close to him there and then with two to go the fuel light came on that the fuel pressure was low, so I came around and had to start pushing the clutch in and shutting it off and coasting and try and preserve what fuel I had to make it back,” Biffle said post-race. “I was excited to see the checkered flag. I wasn’t sure I was gonna stretch two laps of gas out, but it was probably on the straightaway it sucked some air and started flashing the fuel pressure, so I was able to run it around the corners and didn’t have any more issues, but I stayed in front of the [No.] 88 and finished second and it’s a big boost for the team, but probably a bigger boost for the team was how we ran tonight on the racetrack.”

It would have been easy for Biffle to have coasted around the track before that, not even risking running out of fuel to go for the victory. At first, that was the plan: Coast around the track and grab a much-needed second-place finish, a result that would serve as only the second top-five finish for RFR this season (Ricky Stenhouse Jr. finished fifth at Bristol Motor Speedway earlier this year). However, Biffle, realizing how close he was to the lead, decided he was going to go for it and make a run on Edwards. Despite the fact that his tank began to run dry with just a couple of laps left, the No. 16 car was still able to hang on for second.

“I’m really excited for the team and the organization,” said Biffle “We’ve been working really, really hard on our cars. It’s been well documented how bad we’ve been running, so it feels good. It’s kind of funny because I decided if I finished in the top 10 tonight I was gonna stand on the door top and be all excited and cheer and I finished second and I’m not happy. The thing is we ran in the top 10 all night. The car was good and had a lot of speed. That was a huge improvement. We haven’t done that in probably a year, so I’m super-excited about that, and then because of that run and where we were running it gave us the opportunity to try and stretch the fuel window and make it.”

It appears Biffle has some mixed emotions about the finish. While he was happy for the team’s first truly great finish in a while, it was also very clear how disappointed he was to have been so close to the finish and not been able to capitalize.

It’s probably not helping that he was able to “sort of” win during the All-Star Race weekend last week. Every year before the Coca-Cola 600, Charlotte Motor Speedway hosts the Sprint All-Star Race, which locks in winners from the previous Sprint Cup Series season, any winners leading up to the current year, as well as prior All-Star Race winners and Sprint Cup Series champions. Biffle was excluded from all of those categories; however, the Sprint Showdown serves as a Last Chance Qualifier for all eligible drivers who didn’t meet the criteria in order to transfer to the All-Star Race.

Biffle won the first segment in the Sprint Showdown, transferred to the main event, and qualified on the front row. Though he finished 13th in a 20-car field, the No. 16 car showed speed all weekend and for most of Saturday night’s non-points event.

So Biffle very recently experienced a taste of victory, if only a small one, so it was only to be expected that he wanted to make it to Victory Lane during an actual points event. He was just a few seconds away from doing so.

“Michigan, I’ve kind of got it circled on my calendar because if we’ve got speed on these kind of tracks back again, that’s a good race track for us so we’ll see how we stack up,” Biffle continued post-race.

Another reason Biffle has Michigan circled on his calendar? It’s the site of his last win, back in June of 2013. June 14th is the 2015 date for Michigan International Speedway, though Biffle would most certainly like to win before that.

Now, these last two weeks at one track don’t necessarily mean that RFR is back to its prior state as one of the premier organizations in the sport. However, Biffle is encouraged by what he has seen from this team as of late, though he admits there is still work to be done.

“I think mostly what I know of that we’ve found is the setup on the racecar, a little bit of a different front suspension and springs and shocks, we’ve kind of gone a different direction and that seems to be – I can’t believe that we’ve missed that for a year,” Biffle mentioned in his post-race press conference. “We haven’t found anything to get our cars to go faster and then we change some minor stuff and all of a sudden here we are. I’ve got my fingers crossed that with all the simulation and all the things we have, hopefully we can pinpoint what we changed and what made the difference and then continue to try and work in that same direction and hopefully each racetrack is different, Dover is definitely different, so we’ll see if those changes we made improvements will continue on.”

If that’s the case, the competition might want to keep an extra eye on the No. 16 machine this weekend. Biffle has two career victories at the Monster Mile and it’s safe to say his appetite has been officially whetted following a fair amount of success over the last two race weekends in Charlotte.

*Honorable mention to Martin Truex Jr., who led 131 of 400 laps in the Coca-Cola 600, the most of any other driver. However, with the No. 78 team, it seems to be a matter of if, not when, they get to Victory Lane. For Biffle, the matter of “if” is a big question, thus the need for desperation in the closing laps of the race.

Good to see Greg up front.