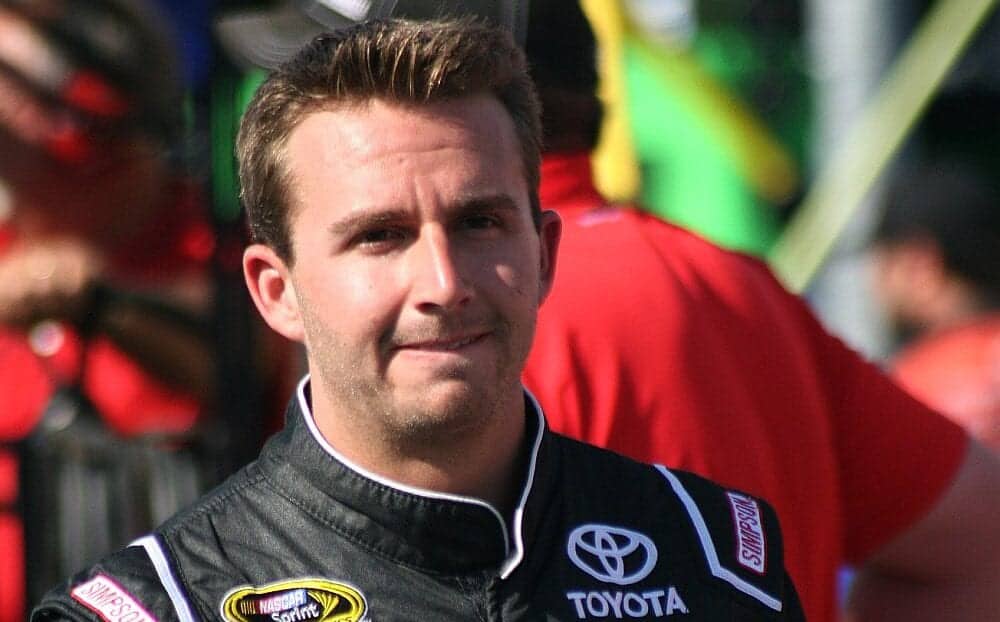 Driving in the Sprint Cup ranks isn’t easy, especially for a rookie driver on a smaller team, but Matt DiBenedetto is making the most of his opportunity with the No. 83 car at BK Racing.  He sat down with Amy Henderson at Charlotte Motor Speedway before the Coca-Cola 600 and talked about his latest opportunity, what he’s learning, and why he’s optimistic about his team’s future.

Amy Henderson, Frontstretch: Let’s start off talking about your progression as a driver. I remember you running late models at Hickory, a stint in development for Joe Gibbs Racing and now here at BK Racing. Tell me a little about that journey.

Matt DiBenedetto: We had our own team up until 2007. Then it just got too expensive for us to do as a family. We honestly actually quit racing, just completely done, sold everything we had. The next year, a team out of Asheville, N.C. owned by Mitch West picked me up and ran me in some races. We won a lot of big races and I got some attention. To make a long story short, I ended up testing at Gibbs and signing with them. But the timing just wasn’t right at the Gibbs deal, so I just had to fend for myself for a little while and take what I could get. I got lucky this year. I had some good runs in the Xfinity Series last year with a low-budget team. I had some of the best finishes they’d had in the team’s history. Ron Devine took notice and heard a lot of good things, and took a chance and put me in the car. This year has been a great year. We’ve been getting better every week. Our stuff is a lot better, so it’s been great to be at the Cup level.

Henderson: Talk about your improvement as a driver. As you said, you had some really strong runs with a low-budget team and having some good runs this year. What have you learned, what are you doing that’s bringing you along as a driver?

DiBenedetto: When you run for a lower-budget team, I think one thing that comes into play is that you have to race real smart. You can’t be out there tearing up cars. Especially at the Cup level, you have to finish races, first off, so then you can get in a good position in the points like we’ve done this year. That makes it so you don’t have trouble making the races, and that kind of sets you up for the rest of the year. So that’s been a great thing for us. When you run for this kind of team, you’ve just got to race smart. You’ve got to go fast; obviously you have to qualify the car in the show. We’ve been having good communication. You have to get all you can get out of these cars, so working with the team, we’re running about 5-10 positions better in a race than where we started the year, so we’ve been getting quite a bit better through all our communication.

Henderson: When you talk about racing with a smaller team, what do you wish more fans knew about these small teams?

DiBenedetto: It’s a totally different operation. Some fans don’t know that, and that’s not their fault, but it’s just that we probably run on 10-20% of the budget of the big teams. I’d say 10% is probably more realistic. The amount of resources we have – people, engineers, racecars, technology – everything is far superior. For what we deal with, it takes the guys grouping together and working a lot more when you’re a lower-budget team. We’ve really got to work together well and make the most of what we’ve got. When you can take equipment that is much lesser than those guys and be running with them and running in the middle of the pack, those are wins for us. Wins for teams like us are a lot different than wins for the big teams. When we run competitive in the middle of the pack and we’re beating teams that run on 10 times the budget of us, that’s a success.

Henderson: How do you set goals for yourself as a rookie driver in the Cup Series, especially for a team that had a shaky year last year and is now improving, now and as the season goes on?

DiBenedetto: You know, really it’s not any finishing position number or anything like that. It’s just having good solid finishes and beating the cars that we need to beat week in and week out for points purposes. I’ve never been so concerned about points before, but when you get at the Cup level, it’s really critical to be in a good spot in points for making every race. So, finishing races strong, trying to improve our position every week, and beating teams that we need to and trying to get faster each week. As far as me as a driver, I’m just happy to be at the Cup level. It’s just fun to be running and trying to make a good name for myself. I’m happy to be with the team. They’re such a great group of guys and it’s been a fun year.

Henderson: You’re teammates with JJ Yeley, who’s a veteran in the Cup Series, and Jeb Burton, who’s also a young guy and still learning. Do the three of you talk, and what do you learn from each other?

DiBenedetto: It’s nice having someone like JJ, who’s obviously a veteran, and I can bounce a lot of information off of him. I’m pretty comfortable in the cars and everything; nothing’s too crazy new compared to what I’m used to, but still, him being around, it’s good to bounce some information off him. As far As Jeb, he has a very similar driving style to me. We overlay all of our throttle traces and everything, and we both look for a real similar feel in the racecars, so our team and their team really work together well as far as getting our cars how we like them. If I’m practicing in race trim and he’s practicing in qualifying trim, for qualifying I can throw in his whole setup and pretty much be good to go because we like a similar feel. It’s nice having three cars and all three of us are different in our own ways, and it in turn helps us all.

DiBenedetto: Yeah, it’s been great, especially for so many people to take notice. It really just shows the hard work of our team and that’s the most important thing to me is it just shows how hard my guys work. It’s been great for us to be running so well and getting better every single week. It’s exciting and encouraging for the rest of the year.

Henderson: What about the next steps for the team? You talk about running a little better every week; so what’s a realistic goal by the end of the year? Top 25s, top 30? Where do you see yourselves being consistently?

DiBenedetto: If we get to where we’re running in the 20s every week, that would be great. Obviously some weeks are going to be better than others and that’s going to be the same case for everybody. If we just keep racing around better and better people every week, that’s what we’ve been doing so far, and if we keep improving on that, that’s the main goal. So no real position number, just kind of competing with better cars and bigger-budget teams than us is definitely performing.

Henderson: What tracks do you have circled on the calendar for this year?

DiBenedetto: I always run well at Bristol. I had a good run there earlier in the season. Kansas was a really good one for us and I know we go back there. I’m excited to run the road courses for the fun factor. I’ve always had a lot of success on those. And then Darlington, same reason, just to have fun with it. Those are the ones that stand out.

Henderson: Now that you’re having some racing success, what else is fun for you?

DiBenedetto: I get asked that question a lot, and it makes me feel like I have no life other than racing. (Laughs) It’s pretty much all I eat, sleep and breathe. If I’m not racing, then I’m going to the race shop. I like hanging on the lake, trying to relax for a day or two. It’s a busy schedule when you’re running at the Cup level compared to what I was used to. It’s different being gone most days of the week.

Henderson: Do you ever have a chance to run a late model or anything like that, or would you if you had the chance?