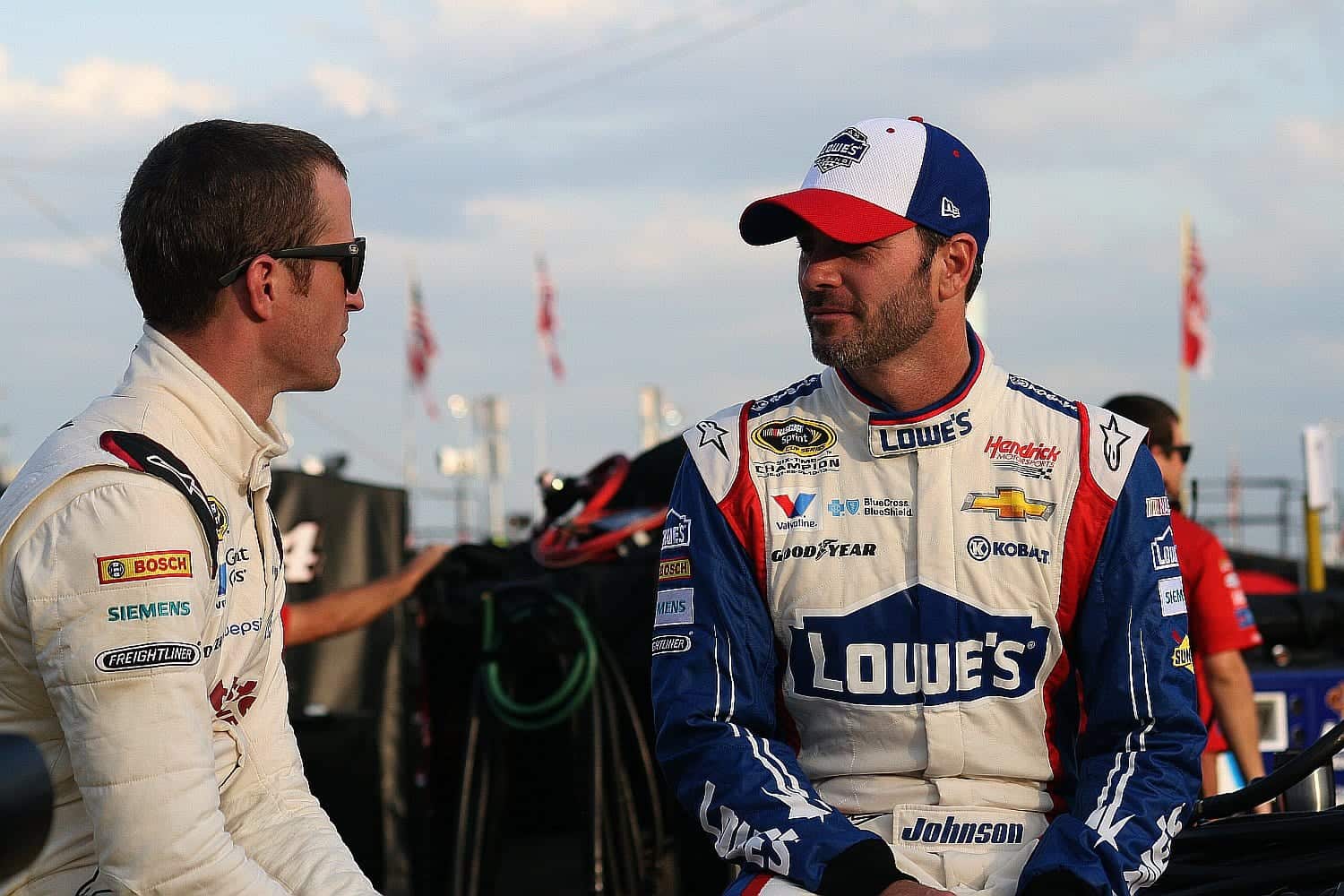 By winning the Coca-Cola 600, Carl Edwards has now joined the Chase fray, putting him in position to tinker around for the rest of the “regular season,” continue building chemistry with new crew chief Darian Grubb and meld into the Joe Gibbs Racing organization as a whole. Congrats goes to Edwards, then for earning his first win at JGR, a great way to start fitting in.  It also means that there will be three Gibbs cars in the Chase, something that neither Hendrick Motorsports nor Stewart-Haas Racing can claim. But hey, all of Team Penske is also in the Chase, so take that, all of you!

Picking on the Chase has become almost too easy. Almost. While the powers-that-be at NASCAR may have hoped developing the format would bring more worth to winning, it has also brought about a counter-intuitive aspect. Once you’ve earned a victory, winning isn’t quite as important – at least until the final 10 races, when it is suddenly the most important thing to moving forward.

Take Daytona 500 winner Joey Logano for instance. With his win he, for the most part, secured a Chase berth even if he still has to run 25 more races before it begins. The element of the rules that proclaims a driver must be 30th or better in points to make the Chase is rather laughable for a team of Logano’s caliber.  How likely would it be for his team, ya know, the one contending for the championship last year at Homestead, to not sit inside the top 30? It would come across as a statistical anomaly.

So that means Logano had raced just 3.84% of the regular season yet was all but guaranteed a trip to the playoffs. In what other sport do players complete just over 3% of their season and are already slated to run for a championship? Weird.

The likelihood is that the Chase and the parameters that surround it are not going to change much in the next few years.  Sure, there may be some little tweaks but doing anything drastic would mean that someone made a mistake. It’s doubtful that anyone in a power position would be willing to show such vulnerability, especially with critics willing to tear down the walls with “I told you sos.” It would be like a FIFA official not taking a bribe or turning down a World Cup opportunity in Qatar. But really, who cares about the Chase these days? The focus is on the actual racing, you know, competition that’s become a mix of fuel strategy, pit calls for tires and restarts more so than it is a driver trying to outrun another driver.

There’s likely to be no cure to that ailment in the foreseeable future, either. The current Sprint Cup car configuration has a very real prospect of being used again next year, even though there was the potential to test new rules at the All-Star Race. No doubt that won’t appeal to many fans, but hey, Gibbs and Penske should be happy. That’s who we’re trying to please here… right?

Enough with these awkward realities. Let’s get happy ourselves…

Happiness Is… Funny Stuff. Did ya hear, did ya hear? Chad Knaus and Jimmie Johnson got totally busted this week.  They’re toast.  How are they going to recover?! Egads. NASCAR has once again come off looking like an ineffectual kindergarten teacher with its “punishment” of the No. 48 team. For playing with their side skirts in the All-Star Race, then not fitting the car template for the 600 Johnson and company were given a written letter of admonishment. One can only imagine how it read.

This letter is to inform you that you’ve been naughty and we’re not real happy about that. We would appreciate it if you’d start following the rules that we’ve laid out. Pretty please. If you do not comply, we will have to get really angry and do something that you won’t like, which could mean taking away points or something. We look forward to seeing you in the Chase.

For their transgressions, the dynamic duo will not be able to select their pit box at Dover until 41 other drivers have done so.  That’s right; even if Johnson/Knaus wins the pole, they don’t get to choose the number one spot or any other spot, for that matter. I’m guessing will they survive, though – especially at a track where Jimmie has built a condo in Victory Lane. As for taking away points in the future, that’s laughable as he’s already locked into the Chase and would have to lose almost 200 right now to fall outside the top 30. They could run a car with self-regulating tires, jet fuel in the tank, and side skirts flushed out like eagle’s wings and still not incur enough of a penalty to miss the playoffs.

You know, maybe we’ve been looking at the “Boys, Have at It” mantra all wrong. Maybe it was meant for creative individuals like Chad and Jimmie to have fun finding new ways to try stuff.

Happiness Is… Yoga. The practice of yoga is purported to have a number of benefits. It increases flexibility, helps to develop core strength, improves balance, and is also supposed to bring peace of mind. In addition, yoga has brought the world yoga leggings, the bacon of clothes for men – though one could argue that aspect and its contribution to things.  Hence, it was big news this week when Danica Patrick resumed posting pictures of herself in yoga positions. Go figure.

Everything Patrick does brings eyes, and the yoga pics could certainly offer a chance for lascivious minds to stare at them in a way that goes beyond pop digestion. But really, she is a healthy, fit woman and there’s no reason that she shouldn’t be proud and willing to share that. Sure, it’s not really news, but Happiness Is will never be able to fold into some of the positions she’s shown.

Happiness Is… Released. IndyCar driver James Hinchcliffe was released from hospital this week after suffering an injury to his left thigh and leg that nearly killed him. A round of applause for the Holmatro safety crew that rescued him from the car and helped him on the scene. Pictures of Will Power pushing Hinch from the hospital released through INDYCAR show the two in good spirits. No timetable has been established for Hinchcliffe’s return but that doesn’t matter. That the Indy 500 went off without a serious injury should also be acknowledged and appreciated.

Why is it that The Chase is “not going away anytime soon”. I just don’t get it other than BZF doesn’t want it to be gone. That is not saying it is a impossibility but in reality it could be done, if the man was in his right mind, which clearly he isn’t.

I do find it totally laughable at the fines posted for certain teams regarding this past weekend. Shame on NASCAR, do you not see what a joke you are.

As for the “Yoga” stuff, yup..that is what NASCAR fans want to know, and for the record…one does not need to be “physically fit” to do a very easy head stand and all the stuff you can do with a head stand. Funny stuff…truly.

To me another side-effect of the win one race and you’re in the playoffs mentality, is that it creates a group of teams that can take chances with the rules and there is no way to punish them. So you get your win locking you into the chase and you start trying stuff that pushes the limits of the rulebook. So what if you get a 50 or 100 point penalty, most will still be in the top 30. On the other side of the coin, those who don’t have a win can’t take any chances on getting a penalty because to them, every point still matters.
To me that is the most unfair part of the new chase. You create on group that is beyond punishment for breaking the rules (assuming that they don’t break a rule that would result in suspension).

I can’t believe we are talking about rules. NASCAR rules change so frequently as to be irrelevant.

Brianless never makes mistakes – just ask him, so of course the Chase isn’t going away. And P. Huston if you really think the “focus” is on the racing, you have been drinking too much of NASCAR’s flavor of kool aid. The “racing” has gotten worse, not better with the new but not improved rules package.

Fines? who cares about fines? Win and your in and you can do whatever you like until you get to those last 10 races and have to get serious again. Makes a total mockery of all of it — yet there seems to be puzzlement as to why ratings are down. No need to watch races until maybe the last 10 if then, 26 races for seeding purposes.

Are pictures of Danica doing yoga, any less newsworthy than say, the 127 team will be running a decal at the Insomnia 500? Or maybe a 1 race sponsorship from Bubba’s car wash

I still want to know why Chad and Jimmie get these love letters begging them to stop, and the Penske team for one of the crew touching the skirts got the crew chief on probation for the rest of the year? Can someone explain that?