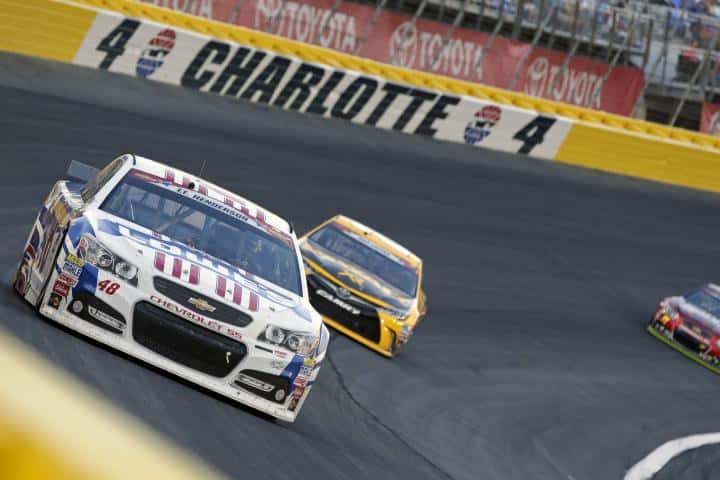 If Jimmie Johnson is to win again at Dover this weekend, he’ll have to do so with a less-than-decent pit stall.

Johnson’s No. 48 team was one of three Sprint Cup teams to be penalized following infractions that occurred during the Coca-Cola 600 race weekend. Justin Allgaier’s No. 51 and Jamie McMurray’s No. 1 also received penalties.

Johnson and Allgaier were both given a P1 penalty due to multiple written warnings given to their teams for infractions during consecutive events. For Johnson, the team was written up for a side-skirt issue during the All-Star Race and again for multiple passes through pre-qualifying inspection for the Coca-Cola 600. Allgaier needed multiple passes through inspection for two weeks in a row — the Sprint Showdown and the Coca-Cola 600.

Both drivers will forfeit their pit stall selection this weekend at Dover until the first 41 stalls have been selected by the rest of the field.

McMurray’s crew chief, Matt McCall, was placed on probation through December 31st for an infraction following pre-qualifying inspection for the Coca-Cola 600. The P2 penalty stemmed from modifying the right rear quarterpanel wheel opening.

Laughable penalties to the HMS group, another team did the same thing and the crew chief is on probation. The inconsistent NASCAR is at it again, and they wonder why true fans question their credibility.

the 48 team got a written warning last week, after the allstar race for the same thing. they’ve been warned during the year about things like this.

i just find it interesting, when i remember to turn on racehub on foxsports1 at night, to hear the latest report from the principal’s office.

The 48 team always gets those “warnings”, everybody else gets the business of probation, suspension, points dock etc…right away…it is laughable. And they are going to appeal..what nerve.

Another article on this site mentioned Hamlin was called to the hauler at the end of the race but didn’t elaborate. Something about causing a caution or the lack of a caution. Anybody know what that was about? I assume he was delirious from dehydration and called out NASCAR for caution abuse.

Wow, interesting..didn’t hear a peep about that…