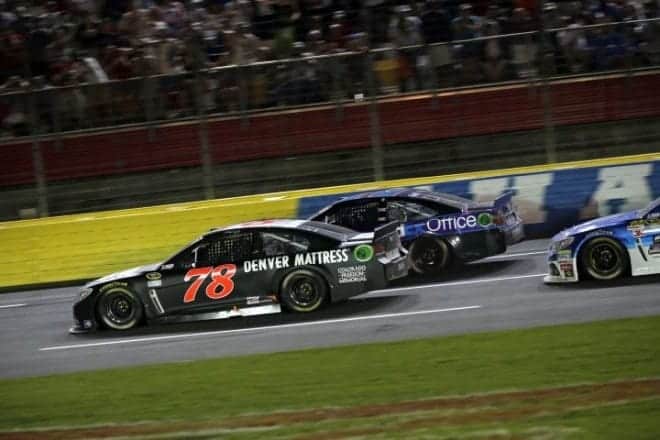 The Coca-Cola 600 provided what we  all look forward to in the Sprint Cup Series – pure excitement. The longest race on the Cup schedule not only proved to be a grueling race of showcasing endurance, but it also showcased team communication and smart decision-making when it came to pit stops. The race winner, Carl Edwards only could do his trademarked backflip on the frontstretch because of good calls by his crew chief, Darian Grubb. Some call it a cheap way to claim a victory, but I call it a win, and more importantly, a trip into the Chase for the Sprint Cup in his first year with Joe Gibbs Racing and Toyota.

Edwards had been pressing himself to get a victory early in this new season, and now nearly one-third of the way into the 2015 campaign, he finally has one. The No. 19 Subway Toyota Camry was simply in the right place at the right time to strike, and all night long was in the hunt up toward the front of the pack. Edwards was a long-shot to pull off a victory on Saturday night in Charlotte (his Vegas odds were 15-1), but a win at this stage in the season changes everything.

As we’ve seen and heard with drivers like Dale Earnhardt Jr. and Hendrick teammate Jimmie Johnson, a win now allows a team to experiment with setups, and go all-in to take the checkered flag every weekend rather than worry about the points. As Junior said over his team communications during the race on Saturday night to crew chief, Greg Ives: “Do you really care about the points?”… The answer simply is no, not after you have a win under your belt. The No. 19 team just catapulted into this elite category for the remainder of the season.

Now onto this week’s mailbox questions from you our readers…

Q: Hi Greg, I’m a big Chevy fan, and outside of the two Stewart-Haas cars (Nos. 4 & 41) one of the best Chevys out there this weekend was the No. 78 of Martin Truex Jr. I know he’s been getting better and faster each week, but what do you think its going to take for that  No. 78 team to get over the hump and make it to victory lane? Do you think they have what it takes to make it to the Chase? Thanks. – Dave K., Hillsbourgh, N.H.

A: Hey Dave, thanks for checking in. For fans of the bow tie like yourself, I’d have to say you’ve had a pretty strong year so far. When you look at manufacturer comparisons, Toyota only has three victories right now, Ford is next with two wins. As for Truex Jr. and the Furniture Row Racing team, that single-car operation has really outperformed most people’s expectations this season. After a disatrous 2014 season, 2015 has been a tremendous turnaround, and the team has really taken a huge leap forward.

Truex Jr. has an average finish of 8.7 this season. In Saturday night’s race he led the most laps with 138 (out of the total 400) and probably would have won if not for having to pit for more fuel with just 20 to go. What it’s going to take really is just time. More time in the seat for he and crew chief, Cole Pearn to mesh more and just log laps. There’s no doubt that Truex is fast in that No. 78, and like Edwards last weekend, it just comes down to being in the right place at the right time for Truex to notch that win. He just hasn’t been there down the stretch this season early on here, but that’s been a pretty tall order for any of these drivers who have had to fight off strong cars who have created huge leads and space like Kevin Harvick, Kurt Busch or Johnson.

Q: Since this weekend is my favorite of the year, when the Sprint Cup Series heads to Delaware- what’s your thoughts on who’s the favorite at Dover this weekend? Thanks. – Reid F., Smyrna, Del.

A: Reid, appreciate you writing in this week. When the traveling circus we call the NASCAR Sprint Cup Series descends on your town, it’s a really special feeling and a really neat time of the year to look forward to. Dover has been a really great track for racing and lead changes over the year because of its concrete surface and its high banking, so I too am looking forward to seeing what happens at the Monster Mile this weekend coming up.

The last two wins at Dover were both by Hendrick Motorsports Chevrolets, with Johnson winning last June and Jeff Gordon visiting Victory Lane in the fall race. Given how the two have been running at short tracks this season, I’d say they’re both cars to watch. I think another interesting driver to keep an eye on will be Kyle Busch. Call me crazy, but no one loves short-track racing at Dover more than Rowdy. And despite his injury setbacks, his solid finishes in the past two races shows that he’s back and ready to race. Also, look for Denny Hamlin after his win at Martinsville earlier this year, he’s had great speed on short tracks.

You lost me on the first line there, “pure excitement” ?????

Must have seen some alternate reality 600 that didn’t show up on my TV.