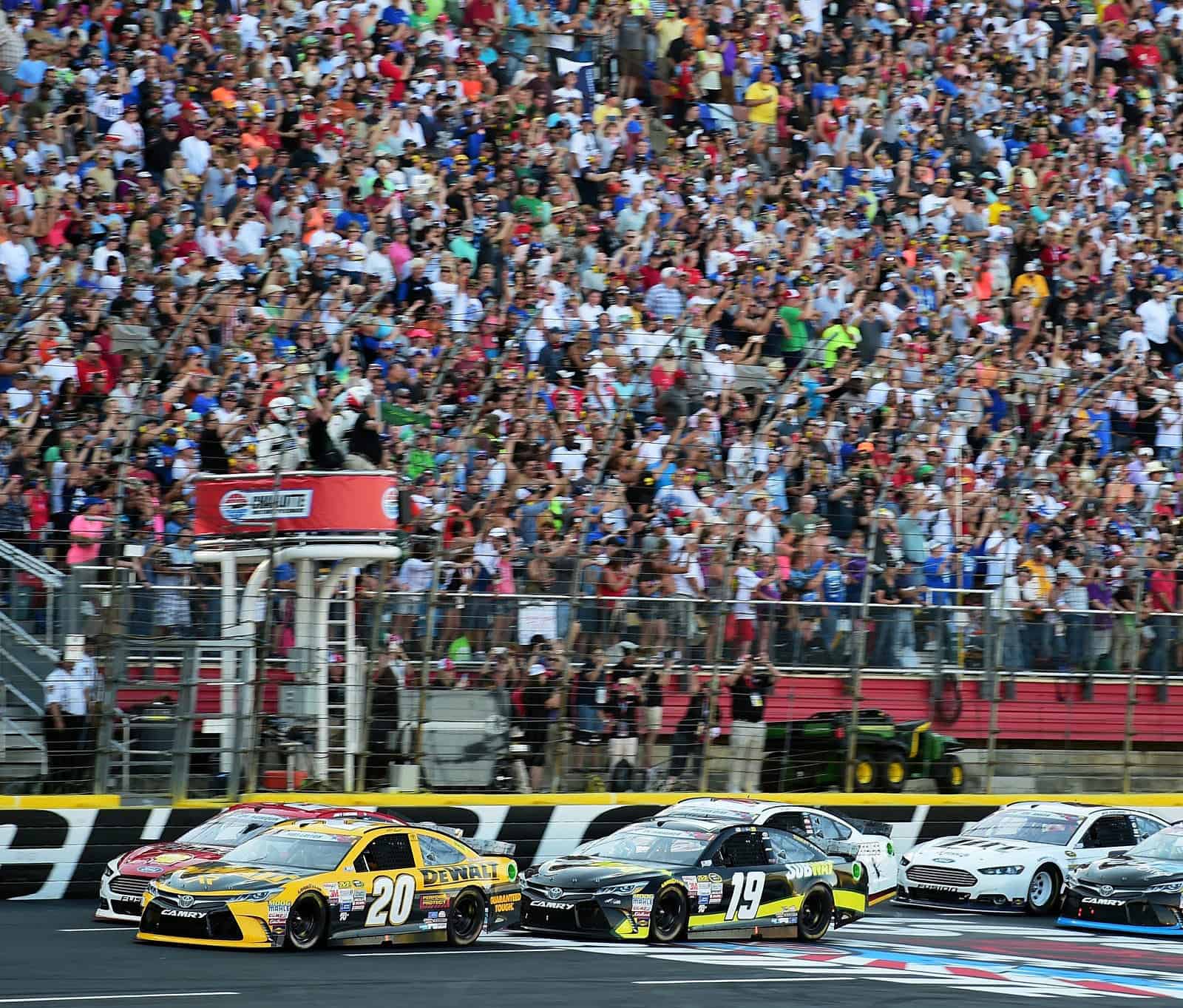 Welcome to the Frontstretch Five! Each week, Amy Henderson takes a look at the racing, drivers and storylines that drive NASCAR and produces a list of five people, places, things and ideas that define the current state of our sport. This week, Amy has some lessons learned at Charlotte Motor Speedway.

1. There are some really cool people you don’t know enough about.

Most fans, with thanks to too much of the media, know a lot about few drivers. Tony Stewart‘s pet pig, Dale Earnhardt Jr.‘s treehouse or Danica Patrick‘s relationship? Those have been covered nine ways to Sunday. How about a young driver who clawed his way through the ranks, a veteran who’s finally happy with what he’s accomplished for a team that’s a few steps below where he started or a rookie who has a 9-to-5 job and is working to finish his degree, all while racing at NASCAR’s highest level? Wouldn’t you like to hear those stories, too?

I’ve said before that the sport is about people as much as it’s about fast cars. If that’s true, then perhaps part of the reason fans find it boring is that you can only hear the same stories about the same drivers so many times before wondering what more is out there. The truth is, there’s a lot more. Fans are being done a disservice when they don’t feel like they know all of the participants in the sport. That in turn does those teams a disservice as they don’t have the fan base they perhaps would if fans knew what they were about, and sponsors aren’t getting their money’s worth. Everyone loses by not knowing the whole story.

NASCAR Hall of Fame elections are part of May in Charlotte and always bring a reminder of what the sport once was and who made it what it is today. Would most fans recognize Terry Labonte or Jerry Cook on the street? Did they recognize them as they arrived at the Charlotte Motor Speedway media center? So many of the sport’s new fans don’t know – and worse, don’t care to know – about the sport’s history. That’s hard to fathom, because without its history, a sport is reduced to just a sliver of what it can be.

Labonte and Cook both recalled people who had been instrumental to their careers, races that stood out for one reason or another. The great part about NASCAR is that everyone has this kind of story: a phone call almost missed, a memorable on-track moment or, if you go back far enough, somebody naked in a swimming pool. The old stories are wild and speak of a different time. And so many of the principals are still a part of the sport that it’s easy to understand its past. Knowing the past gives perspective to the present, and that’s something many fans are missing out on.

3. The elephant in the room.

In a nutshell, the racing on the intermediate tracks is less than exciting, due in part to the aerodynamic package on the current racecar. The problem is, significant changes to the aero package aren’t something that can be made overnight, and if fans want the cars to look like the street companions, that limits options further.

Kevin Harvick took a rather pessimistic, but partially true, view of the situation last week at Charlotte.

“It’s always going to exist in racing. It’s never going to not exist,” Harvick said during media availability on Thursday. “Your car is never going to run as fast behind another car as it does by itself. It’s just absolutely impossible, and I think these cars, over the last 20 years, have become more sensitive to aero-push. I just think in the ’70s and ’80s it was probably there; they just didn’t know. We almost know too much about everything that’s going on now.

“I could make my car run fast behind other cars last week, but it’s just a totally different way of driving the car when you’re behind somebody than it is when you’re driving by yourself. Denny (Hamlin, race winner) made a good move and he kind of caught me off-guard. I felt like I had options to run all the way up against the wall or I could run on the bottom. I could maneuver my car. When you’re carrying too much speed on entry and over-using the throttle like you do in a 10-lap sprint, you’re right on the edge of really losing the front-end if somebody’s in front of you. When you’re behind a car, you can’t overdrive it. It’s just something that’s always going to exist. It’s impossible to fix.”

Harvick is right in that the issue can’t be completely cured. But can it be improved? Absolutely and it’s not even a difficult concept: give the cars more ground clearance. Instead of a splitter glued to the track, allowing air underneath the car would go a long way in alleviating the effects of dirty air flowing over the top of the car. And it would look more like the street versions. So why doesn’t NASCAR look into going old-school on the aero package? It wouldn’t be easy to make such drastic changes, but it could be done.

4. Trying some things doesn’t mean having to settle.

Do teams already qualified for the Chase use the races between now and the end of the regular season to test things out? Sure, and they’re smart to do it, but does it mean they don’t try to win? Not if Sunday night was any indication. Look at Harvick and Jimmie Johnson, both of whom are all but assured a Chase spot. Harvick led three times, unafraid to mix it up with anyone. Johnson spun twice, thanks to an aggressive setup that got ahead of the track. Had the track tightened up as quickly as the No. 48 team expected it to, it would have been right there. As it is, Johnson has had a car so loose he could barely hold onto it for three weeks in a row, including his win in Kansas. That his team is willing to be so aggressive speaks volumes. He may not have to win at this juncture… but he sure as hell wants to.

5. There’s so much more to a driver’s race than what you see on TV.

I got an unexpected reminder on Sunday that what you see is not always what you get. Listening to the drivers’ radios every week gives a glimpse into how hard it really is to compete in a Sprint Cup race. I usually scan through the field during races to get a picture of how things are playing out and changing for multiple teams and drivers, but this week, I listened to the No. 13 transmission for most of the night, doing some prep work for a feature column. Driver Casey Mears started 34th and finished 26th in what would have looked on the outside like a fairly routine race with some decent gains. The gains were decent, but the race was far from routine. So what happened between the flags?

About 40 laps in, Mears reported a loss of power and the smell of smoke in the cockpit, as well as his cool box, the unit that sends cooled air through his helmet, shutting off. He flipped the ignition off and on again, and that did seem to clear the power issue, except for Mears’s cool box, which didn’t work for the rest of the night. The driver asked for ice on his pit stops and extra water, and though he was clearly uncomfortable, there didn’t seem to be further ill effect on the racecar.

The team worked to adjust some handling issues throughout the race, which is common. Mears had trouble with the car getting too loose off the corners. He was running lap times close or equal to the leaders for a time and working traffic. The next surprise came in the form of Mears’s spotter, who reported feeling ill over the radio and eventually turned spotting duties over to Justin Allgaier‘s spotter after he fell out of the race.

Just past halfway, Mears tapped the wall. It didn’t kill the car, but it did affect the handling. Damage was minimal and the team adjusted to it, and he tapped the wall a second time later in the race.

Cooperation between teams was also engineered during the race. Mears was pitted next to Johnson, who was multiple laps down after a pair of spins. Mears’ team asked Johnson’s to wait a lap to pit under caution to give Mears a clear path in and out of his box as he was one lap down and looking for a free pass. The No. 48 team obliged.

Perhaps none of that was extraordinary, but it does illustrate just how complex the sport is. Take 43 teams, all with unique experiences during a race, and it’s hard to say they’re just driving around when you take into account the details. It all goes back to the first point in this column. The people and the stories, make the sport and they make it richer, better. We just have to pay closer attention.

9 thoughts on “The Frontstretch 5: Lessons Learned at Charlotte”