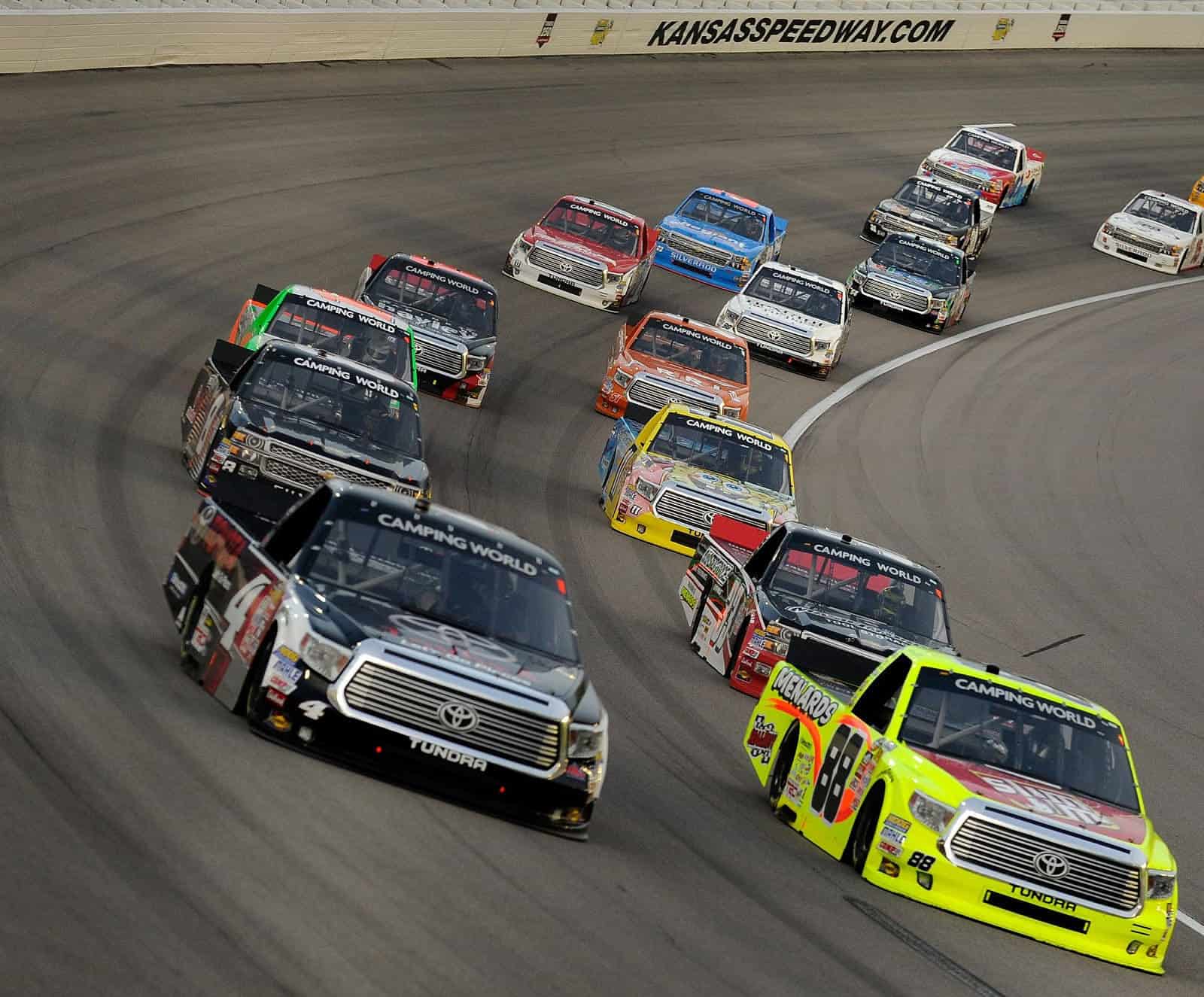 This weekend, the Camping World Truck Series is back in action at Dover International Speedway early Friday afternoon (5:30 p.m. ET). While the Xfinity and Sprint Cup series are hitting about a dozen races on the schedule, the Truck Series has made a whopping five starts so far this season.

Right now, that means this division isn’t even at the quarter pole when it comes to their battle for the championship. But just because it’s still a little early doesn’t mean we can’t talk season trends. Here’s five things to think about five races into an already eventful year for the Trucks….

As I documented last week, James Buescher has been sidelined for the last two races, replaced by Scott Lagasse Jr. after being entered by NTS Motorsports. The initial plan for the organization was to field the truck full-time with a variety of different drivers behind the wheel. Once again this week, Buescher was entered, this time with the sponsor listed as TBD on the preliminary entry list. However, the full-time campaign for the No. 31 truck came to a screeching halt as NTS Motorsports was forced to withdraw it from Dover due to a lack of sponsorship.

“We are extremely disappointed that our sponsor for the No. 31 truck did not come through as originally promised,” team owner Bob Newberry said in a statement. “It has always been NTS Motorsports’ intention to run two full-time trucks this season. However, without a sponsor, it is in the team’s best interest to focus our people and resources on the No. 14 Clean Power Silverado at Dover International Speedway. We have drivers and sponsors committed to the No. 31 for many other races this season, and we plan for the truck to return as competitive as it has always been for those events.”

The bottom line for pretty much any team in NASCAR is that money dictates whether they even end up at the track, especially given the price tag on what it costs to run a full season. This trend rings true even in the Truck Series, a discount deal for companies as their schedule is shorter. And while losing a truck from the entry list is a blow, the good news is that the field will still be full with 35 remaining entries. The intent for NTS is to continue fielding that second truck as long as sponsorship allows, although the loss of Buescher, a former champion from the title hunt is disappointing for a series that could use more star power.

In March, Jesse Little and Team Little Racing announced he would be making his Truck Series debut at Dover International Speedway in May. At the time of the announcement, he was unsure which team would field the truck he had revealed on Twitter. Only one detail was for certain with the 18-year-old: he knew where his first start would be.

“Dover has always been at the top of my list when it comes to racetracks,” Little said in a team release. “I feel that tough and demanding tracks, like Dover, suit my driving style best. I was able to grab the pole and lead quite a bit of the K&N race there last fall, and I will definitely put that knowledge to use this weekend.”

Fast forward two months, the Monster Mile looming and the 18-year-old now has a place to race. A partnership between Team Little Racing and ThorSport Racing will put Little’s No. 97 Toyota on the track with teammates Matt Crafton, Johnny Sauter and Cameron Hayley. Earlier this week, Carolina Nut Co. signed to provide sponsorship for the K&N Pro Series East driver, and he will have veteran crew chief Harold Holly atop the pit box.

Excited to finally share the @CarolinaNutCo Tundra with you guys! Im ready to make the best of this weekend! pic.twitter.com/zyFTzKjjD8

For now, Little’s focus is on this weekend’s event at Dover, though the original announcement mentioned multiple starts for him this season.

“We would like to compete in the series as much as we can this year without going past the rookie eligibility limit (seven races maximum) but we’re only looking at the Lucas Oil 200 right now,” Little said. “All of the team’s focus is on this race and doing well.”

In 39 career K&N Pro Series East starts, Little has three poles, one win, 11 top fives, 19 top-10 finishes and was the 2013 Rookie of the Year. He will be forced to make the field on speed, but with the resources that ThorSport has at its fingertips, that shouldn’t be a problem at all. Expect him to do well not just Friday but in many other races this season.

Little is a part of this year’s NASCAR Next class, but he’s not the only driver in that group that will be racing this weekend at Dover. Cole Custer, Austin Hill and John Hunter Nemechek will each make their second starts of the season. Hill finished 30th in the season opener at Daytona International Speedway while Custer and Nemechek were 16th and 29th, respectively, at Martinsville.

Dover has a reputation as a tough place to race, so these drivers with less experience may struggle. At the same time, it has also been a track that has been kind to winless drivers in the series. Aric Almirola, Chad Chaffin, the late Jason Leffler, Brian Scott and Scott Speed all scored their first career Truck Series victories at the Monster Mile. That certainly bodes well for these talented drivers assuming they can remain on the track and within reach of the leader late in the race.

All roads to the championship run through Matt Crafton

Back-to-back champion Crafton has once again got a stranglehold on the point lead heading into Dover International Speedway. With two wins and four top fives, the driver of the No. 88 Toyota currently holds a 16-marker advantage over second place and shows no signs of slowing down.

That said, this race last year is when Crafton scored one of his two DNFs, showing a sliver of vulnerability and finishing 23rd. Having swapped the lead with Kyle Busch for much of the race, the No. 88 blew a right-front tire and careened into the wall with less than 50 laps remaining, causing terminal damage. It certainly wasn’t the death knell the broadcasters made it out to be, but it was definitely uncharacteristic for a team that had been running so well for so long.

However, when your worst finish of the season is eighth – at Daytona even – that’s definitely a positive for a driver who went winless for each of his first seven seasons in the Truck Series. What a difference the past few years have made, Crafton at the top of his game with a team in ThorSport that has yet to be seriously challenged. The bottom line is that if anyone else wants to think about raising the big trophy at Homestead-Miami Speedway in November, they’re going to have to go through Crafton to do it, but…

Though Crafton and crew chief Carl “Junior” Joiner have looked all but untouchable this season, a couple of drivers are running well enough to keep the championship battle interesting. Rookie Erik Jones, backed by powerhouse equipment in Kyle Busch Motorsports, sits second in the standings, just 16 points behind Crafton. It’s likely Jones would have two wins this season, too if not for a bit of bad luck.

A few weeks ago at Kansas Speedway, Jones had the dominant truck and looked like he was cruising to an easy victory. But his fuel tank had a different idea, sputtering dry with just a handful of laps remaining. He still ended up finishing 11th, one lap down, but it was a huge letdown for a driver that had led 151 laps on the night.

Then, at Charlotte Motor Speedway two weeks ago, Jones ran another one of his dominant races. After leading 88 laps, a late caution tightened up the field and saw the rookie engaged in what can only be described as an epic side-by-side battle with eventual winner Kasey Kahne. A visibly upset Jones couldn’t hide his disappointment at finishing runner-up, on the verge of losing his composure in public. But really, if a driver is getting upset about finishing second, that’s a darn good reason to believe that he will be strong for the long haul.

Meanwhile, Tyler Reddick, who won the season opener at Daytona International Speedway, sits just two points behind Jones but, more importantly, 17 markers ahead of Sauter in fourth. Along with that victory, the driver of the No. 19 Ford has four top-10 finishes and a 13th-place result at Kansas where he ran out of gas. Part of the reason Reddick remains on my radar despite not having led nearly the laps Jones has this season is his ability to come from behind. He raced from the back of the field twice at Kansas and still nearly won the race.

While Jones and Reddick will have to go through Crafton – and probably hope for a little bad luck for the No. 88 team – it’s important to note that only five races in, both drivers have impressed, and Jones currently holds a nearly 40-point lead over Justin Boston in the Rookie of the Year standings. It’s certainly possible that we could have a champion that also wins top rookie honors this season.