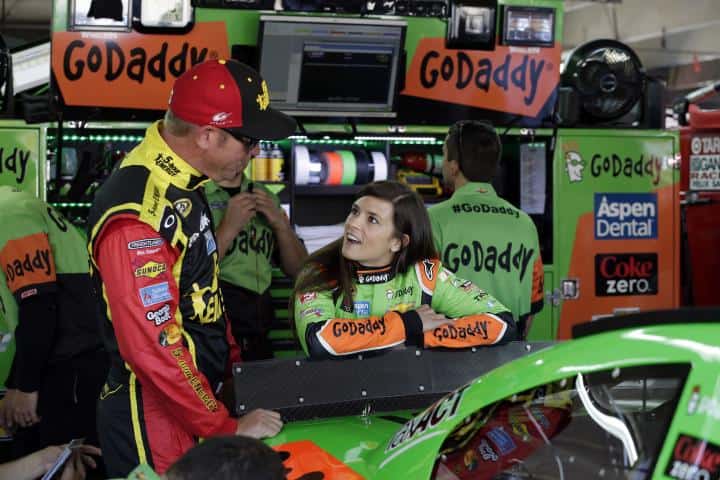 Frontstretch will scour Twitter every week looking for some of the best tweets from your favorite NASCAR drivers, personalities and other people that work around the industry. These were some of our favorite posts from the previous week and we hope you enjoy them too!

If you follow Danica Patrick or Ricky Stenhouse Jr. on Twitter, you have probably seen all of their tweets talking about their dogs. Patrick posted this photo on Instagram, showing everyone how well they have trained their dogs to sit. Let’s just say, they probably spent a lot of time working on this!

Everyone loves seeing Throwback Thursday photos from each of the drivers. Jimmie Johnson went all the way back to 1997 with this Instagram post. Johnson is shown here climbing from his Bud Gebben’s ASA car at Southern National Speedway.

Like Christmas Eve for a Motorsports fan. Can't wait for Monaco, Indy and Charlotte. Good luck and have a great race @F1 and @IndyCar

This past weekend was a huge weekend for F1, IndyCar and NASCAR fans. You had F1 for breakfast, IndyCar for lunch and NASCAR for supper late that night. Scott Warfield, who works for NASCAR, shared with everyone about the three big races on Sunday. Let’s just say – this is a very long day!

Proud 2 receive the 2014 Chug 4 Charity trophy. Thxs 2 @CocaColaRacing 4 all they do 2 help us give back to charity! pic.twitter.com/JPQs9HVLxQ

Joey Logano posted on Twitter showing everyone his 2014 Coke Chug for Charity trophy. Logano won the award by chugging a Coke almost every time he appeared in an interview on television. This is for drivers who have a partnership with one of the most well-known soft drink companies across the globe.

Each driver that competed in the Coca-Cola 600 at the Charlotte Motor Speedway ran a name of a fallen hero on the top of the windshield. Kevin Harvick took some time out of his busy weekend thanking U.S. Army Sergeant Cory R. Mracek on Instagram for his service. Mracek had his name featured above Harvick’s windshield.

Tony Stewart appeared very excited for former NASCAR driver Juan Pablo Montoya after his Indianapolis 500 victory. Stewart posted this tweet on Twitter, showing everyone how proud he was of Montoya. This is something that you rarely ever see with other professional sports.

Kyle Busch had a big weekend at the Charlotte Motor Speedway. Busch made his return last weekend in the Sprint Cup Series and had the birth of his son last Monday. Kyle sported a Skittles scooter around the track and had this picture posted of him eating Skittles before driver intros.

I wish but my dogs have me trained to wake up at 7 https://t.co/lUF4JXVmtn

If you follow Dale Earnhardt Jr. on Twitter, every now and then he might answer your questions during his down time. A fan asked Earnhardt if he ever sleeps in despite his very busy schedule. Earnhardt responded, saying no because his animals always wakes him up in the morning. For those of us who owns animals, we know this feeling all too well.

Favorite pic of the weekend. Enjoy #Memorialday and let's all remember those who gave all so we can enjoy the USA! ?? pic.twitter.com/cjdY8c4Pwf

Clint Bowyer sported a very special person above the windshield this past weekend at the Charlotte Motor Speedway. It is safe to say – we know what his favorite photo is from Charlotte.

Happy Memorial Day! Thank you to all Armed Service members past and present for your sacrifices & our freedoms. #NeverToBeForgotten

Jeff Gordon, who announced Thursday he would join FOX Sports next season, took some time out of his Memorial Day to thank everyone who has served in the military. It is no secret that it has become one of the most well-known holidays around the United States. From everyone at Frontstretch, we thank those who are or have served in the armed forces!

That will conclude this week’s edition of Tweet ‘N’ Greet! If you have not already, and if you are on Twitter, please give us a follow @Frontstretch! We hope you enjoyed this week’s edition and be sure to check back here next Tuesday for another edition!