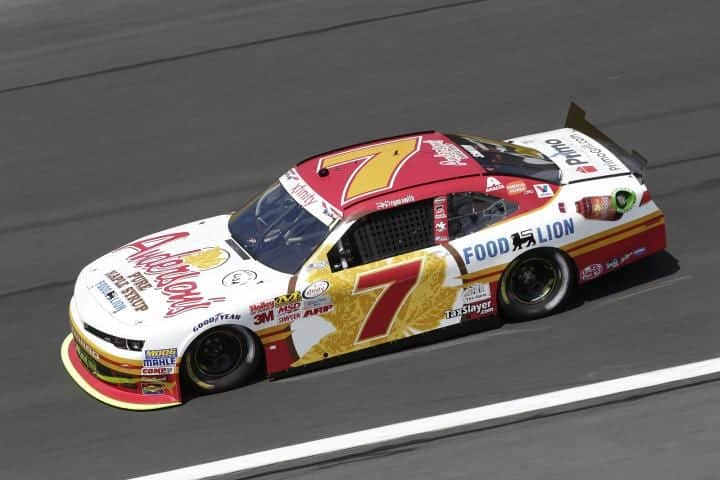 Time is of the essence in the NASCAR Xfinity Series. For two veterans, each strong race can lead to a shot at the championship, each victory a resume builder to job hunt for a promotion back to Sprint Cup. However, opportunities are limited, and capitalizing on the smallest chance to get an extra top 10 or top five could be the difference maker at this stage in their respective careers.

Elliott Sadler and Regan Smith have combined for over 35 years of experience in NASCAR competition. However, since 2013, the two well-known veterans have recorded a mere five victories (three from Smith and two from Sadler). Their struggles in NASCAR’s second-tier division are well-documented, yet their similar situations have made them the elder statesmen in an Xfinity Series often devoid of quality veterans.

Sadler made the move to Roush Fenway Racing over the offseason but has not done much in his time with the team. Through the first 11 events, he has five top 10s, not a single top five and sits sixth in series points. The three-time Cup Series winner has run better as of late, but his best result at a non-plate track is ninth (twice). That’s not good when one teammate, Chris Buescher, is sitting atop the championship chase while another (Darrell Wallace Jr.) is not far behind.

Sadler’s growing relationship with the organization is improving, especially with crew chief Phil Gould, a mechanic who used to be a car chief with Sadler several years ago. But the team is incredibly inconsistent, and it is the veteran that has suffered the most. At this point last year, Sadler was second in the championship standings for Joe Gibbs Racing and had a win at Talladega, showing signs of building a contending program. Can he start accelerating that process in 2015 before it’s too late?

“The transition has been good – feeling out and learning the cars and the pieces of the puzzle to put together,” Sadler said during a press conference last week at Charlotte. “I felt like some of the races we’ve given away and maybe some points that we shouldn’t have. We really feel like Talladega was one that we’d like to have back, but we have a long racing season ahead of us. We feel like we’re better than where we were a month ago and we feel like a month from now, we’ll be better than what we are now with some stuff that we have coming down the pike.”

An average finish of 12.2 is unacceptable for Sadler, who won four races during the 2012 season and has been a championship runner-up. The same can be said for Smith, who has an average result of 11.5 for his JR Motorsports team.

Smith’s situation is slightly different than Sadler’s, though. He is younger and is earning a strong reputation as a “super sub” in the Cup Series. Replacing Tony Stewart in one race last year and Kurt Busch for three races this season, the 31-year-old has reopened the possibility of making it back to the Cup level. He was even tabbed to replace Kyle Larson at Martinsville a few weeks ago when Larson was hospitalized the day before his 500-lap Cup Series race.

Unlike Sadler, Smith has been running inside the top five for a chunk of the season. He has eight top 10s and four top fives, yet two tough breaks have placed him fifth in points – barely ahead of his veteran counterpart. At Daytona, a nasty wreck ruined one of Smith’s greatest strengths, plate tracks while a broken rear gear at Bristol left him behind the wall for several laps. It’s a series where DNFs have been few and far between for top contenders; those two boo-boos are all someone needs to go from first to fifth in a points battle where near-perfection is needed for success.

As both drivers look to get back into the Cup Series, the time is now to start stepping up and outrunning the younger folks below them. The stakes, should they get back to Victory Lane are high when it comes to their short-term future. With RFR’s Cup program struggling, two of their young drivers in peril of losing  rides Sadler has an open door back into the Cup Series. Plus, with just three cars RFR can expand to four at that level with proper sponsorship. OneMain Financial has backed the Virginia native since 2011, a company with deep pockets and with some success, Sadler has been able to run a handful of Cup Series events in that time (albeit paired with other sponsors). His big break nearly came with Michael Waltrip Racing in 2013, when he filled in for an ailing Brian Vickers. However, nothing matured out of it other than a few solid runs and a pat on the back.

The possibility of Sadler getting back to the top level will likely depend on how he performs this season. Roush has multiple young drivers eager to get to the Cup Series, but Sadler would be a solid pick to stabilize an unsteady ship. He’d give the organization a much-needed veteran hand.

Smith, on the other hand, is not with a team that can get him to the Cup Series. There is always the possibility of returning to Furniture Row Racing should funding materialize for a second car there, but the team is not rushing to get one started. Chip Ganassi Racing along with MWR could have possible openings by the end of the season, but those also will depend on sponsorship.

Both drivers might be heavily criticized for their lack of winning; however, they each remain contenders for this season’s championship. Entering Dover, they have a shot to outrun the young breed of drivers at a track that both know rather well. Sadler has eight top 10s at the 1-mile oval in the Xfinity Series, earning three consecutive finishes of ninth or better. Smith, by comparison has struggled at the track over the past two years, collecting three top 10s but has not been a contender for any victories.

At this stage in both of their careers, it will be tough for Smith and Sadler to get competitive rides in the Cup Series. To do so, the time is now. As they move forward, these two drivers will need to earn at least one or two Xfinity Series triumphs if they want to win the season championship. A victory can go a very long way for Sadler and Smith, drivers in position to gain momentum and ultimately achieve a goal near and dear to their heart.

Another chance at Sprint Cup.