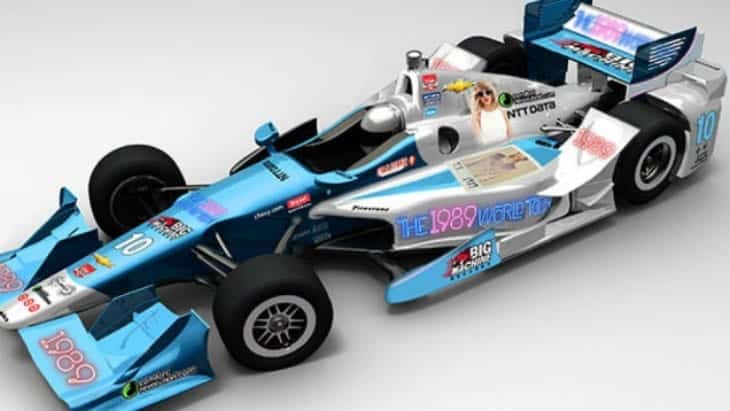 Avoiding the inevitable clichés that will result from this, Taylor Swift will be at the Chevrolet Dual in Detroit, her 1989 World Tour appearing on the Chip Ganassi Racing No. 10 entry piloted by Tony Kanaan.

The sponsorship is part of the Ganassi relationship with Big Machine Records and is in place to promote her stop in the Motor City on Saturday night between both races. The tour kicked off earlier in the month.

Swift is a seven-time Grammy winner and Kanaan hopes that success pits him in Victory Lane for at least one of the two points-paying events.

“I’m hoping that some of Taylor’s luck we saw last weekend at the Billboard Music Awards will carry over with me into our doubleheader in Detroit,” Kanaan said of her success in an awards show last weekend in Las Vegas.

The 2012 Indianapolis 500 winner is in his second season with Ganassi Racing and still looking for his first victory of the season. He is 10th in the championship standings and spun off the turn 3 apron on lap 153 of the Indy 500 on Sunday.

Big Machine Records is also a co-primary sponsor on the Ganassi No. 8 entry piloted by rookie Sage Karam. Rascal Flatts, another act under the label, is featured on his car and they are set to perform in Detroit on June 6.

In the effort to make the front of the car more stable, Honda has adjusted its front wing on its IndyCar aero kit, removing the end-plate and upper components.

The photo below was supplied by Graham Rahal, a driver who has previously said the Honda package has speed but was incredibly difficult to drive. The instability of the car on road and street courses has required its drivers to push deeper into the corners and sling the car around the corners.

Rahal, who has been the fastest of the bunch in the first quarter of the season, is certainly hoping the changes reflect on his efforts in Detroit. He finished second to Will Power in Race No. 1 in the Motor City in 2014.

Wasn’t the original title of this article supposed to be Evil Witch Bent on World Domination to Disgrace Kanaan’s car at Detroit. You need to be wary before before promoting a singer that’s music video features her plotting to burn down an exes home and spitting in his water bottle. Kurt Busch got nailed for a whole lot less than that. Yep, wary is the operative word, like when you walk past Micky D’s and see them trapping pigeons and the next day they have Chicken McNuggets on sale.