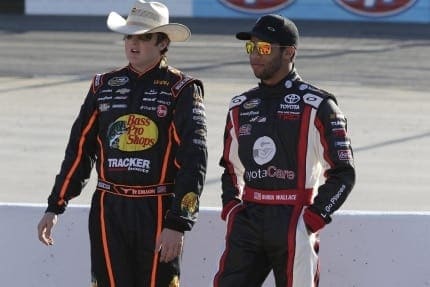 Two strong Xfinity Series talents will see limited time in the Sprint Cup Series in the next couple years.

In the case of Darrell Wallace Jr., he has no plans for Sprint Cup racing in 2015, but Ty Dillon already has a couple starts under his belt for Richard Childress Racing.

It was recently announced that Dillon – sitting second in the Xfinity Series standings after 11 races – will see a third season the NASCAR’s No. 2 series before an anticipated jump to full-time Sprint Cup racing in 2017 that Dillon called “sponsor pending.”

For 2015, however, sponsors are here and Dillon will start the next two Sprint Cup race weekends at Pocono Raceway and Michigan International Speedway.

“I’m running the next two weeks – I’m really excited for the opportunity,” said Dillon who will make his fifth and sixth career Cup starts, respectively. “We have Yuengling and Nexium onboard with us for those two races. That’s going to be a great opportunity for me to be able to capitalize, not only in the Sprint Cup Series but learning and building a notebook for hopefully the future of running there full time.

“Its really going to help our Xfinity program,” Dillon concluded. “Coming out of those cars and getting into an Xfinity Series car is quite a big leap.”

Wallace Jr. is fresh off of a full-time season the in Camping World Truck Series where he won four races. Through the 2014 offseason, Wallace was on the outside and looking for a ride in NASCAR.

At last, Jack Roush appeared and so did a full-time No. 6 Xfinity Series ride for Wallace just in time for Daytona.

Coming off a career-best fifth-place finish at Charlotte Motor Speedway, the Xfinity Series rookie, who sits fourth in the standings, is far from looking ahead to Sprint Cup Series move – at least for 2015.

“We’re so focused on the Xfinity Series right now,” Wallace said Friday in a press conference at Dover. “No Cup plans, no Cup starts for this season. So for me it’s just walking at the racetrack and watching (the Cup guys) practice while we’re off track. We’re trying to get our stuff turned around.”

Dillon and Wallace have only one finish each outside the top 15 in 2015.