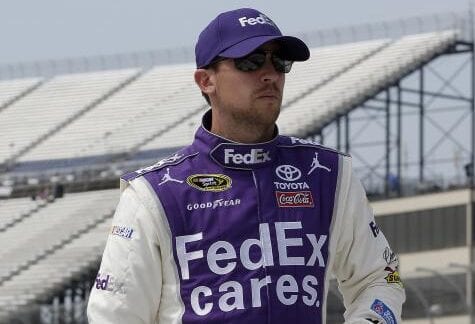 After a great two weeks in Charlotte, sweeping both the All-Star Race and the Coca-Cola 600 Joe Gibbs Racing just keeps on rolling. Their driver Denny Hamlin, piloting the No. 11 car, won the pole Friday for Sunday’s Cup race at Dover, clocking a time of 22.483 seconds (160.121 mph). Hamlin, one week removed from dehydration issues, has recovered quickly, prepped to lead the field to the green flag for the first time since Phoenix last November.

Running a special purple and white paint scheme for FedEx Cares at Dover, Hamlin is set to battle for his first victory at the track. The pole award marks the third in six races at the 1-mile oval for the Virginia native, but he hasn’t been able to translate that into much success. In fact, for Dover he has a middling average finish of 19.2 in 18 starts; it’s a trend he’s hoping to change after some strong performances on-track the past few weeks.

“We’re getting better and this obviously shows it,” Hamlin said following qualifying. “A lot of the speed I felt like came from the tire test that we had here. We were able to try some new things, and the setups are quite a bit better.”

Hamlin’s first pole of the year comes a week after leading 53 laps at Charlotte, where he finished eighth. It’s also JGR’s first pole from a driver other than Matt Kenseth, who has led the field to green twice this year.

Martin Truex Jr. will start alongside Hamlin on the front row for the 400-mile race. Running the same car since Kansas, Truex qualified second for the first time since the 2014 Daytona 500. Over the past two races, the No. 78 car has led a combined 226 laps, a significant increase from a whopping one lap led throughout the entire 2014 season.

“For whatever reason, we thought we were in good shape, and then right there, I went to go for it and for some reason the car just got really tight laying it down in the corners,” Truex said. “So, we missed it by a little bit, but I’m obviously proud of the continued effort by all the guys on the Furniture Row team. It didn’t feel like we were a front row car, and we made some adjustments. They hit it damn near perfect; we just needed a little bit. Another good day and I’m looking forward to tomorrow. I can’t wait to get to work on race trim and see what we can do on Sunday.”

For the second consecutive week, there were no Hendrick Motorsports cars that made it past the second round of qualifying. Nine-time Dover winner Jimmie Johnson was the quickest out of the four-car stable and will start 14th for Sunday’s race.

“I don’t know what my teammates have been through,” Johnson said. “For us, we need to be in the final round with as much speed as we had in the first one. Qualifying has never been my strong suit, so we’ll race just fine.”

Ricky Stenhouse Jr. earned his first top-10 starting position of the season (ninth) for Roush Fenway Racing. Previously, his best start was 14th at Phoenix. Greg Biffle will also start in the top 10 (seventh) for the third consecutive race after not recording a top-10 qualifying position through nine of the first 10 races.

Brad Keselowski recorded his worst starting position since qualifying 39th in the season opener at Daytona as he will start 19th at Dover. Notables starting outside the top 20 include Jeff Gordon (22nd), Kasey Kahne (25th), Tony Stewart (26th) and Danica Patrick (33rd).

Jeff Green and Travis Kvapil were the two drivers that missed the race.