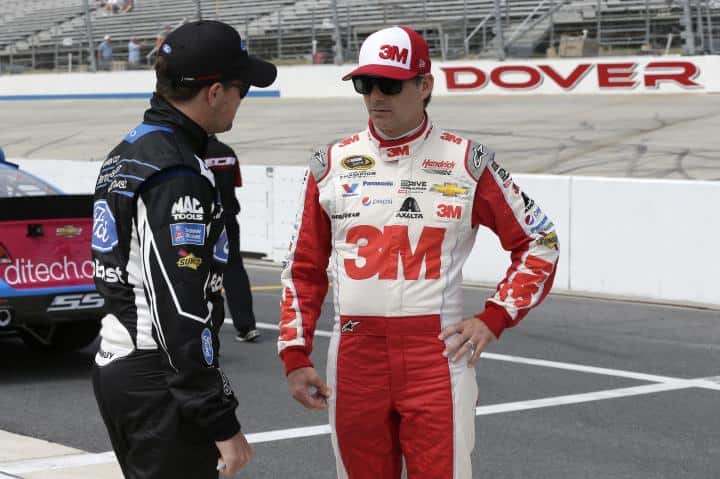 It won’t be long until Jeff Gordon will be in the television booth on a weekly basis. The four-time NASCAR Sprint Cup Series champion is retiring from full-time competition after the 2015 season, and is set to embark on the next journey of his career.

During the Coca-Cola 600 race weekend, Gordon announced he will be joining the FOX booth beginning in 2016 as a full-time analyst. Prior to the announcement, his plans for the future were unknown. However, with a set schedule for next year and beyond, he will pair with Mike Joy and Darrell Waltrip to call a total of 18 races, including the Sprint Unlimited and All-Star Race.

“I feel like I never wanted to step away from racing, but just the wheel of the car,” Gordon told Frontstretch during a press conference on Friday afternoon. “I love the fact that I get a chance to be close to the sport and in a whole different way while being in the broadcast booth.”

This season, Gordon has been in the television booth three times for FOX during its NASCAR Xfinity Series coverage. The move enables him to continue traveling to races, and participating in the broadcasts is not all Gordon will be doing.

Continuing his relationship with Hendrick Motorsports, the 92-time Cup Series winner will be active within the organization. He will still have a presence at the team’s shop in Concord, N.C. and looks to help the team continue to grow.

“I still have a very strong relationship with Hendrick Motorsports, so I am going to really be able to tap into the performance of the cars and the team, and what the drivers and teams are going through,” Gordon continued. “My decision was never to leave the racetrack. It was mainly to kind of focus and do something different. I hope that it gives me a little more quality time with my family.”

Entering Dover, the 43-year-old sits ninth in the championship standings and has not locked his No. 24 team into the Chase for the Sprint Cup. Gordon has an average finish of 15.7 through 12 races and has earned seven top 10s, but he hasn’t quite fully grasped that he is racing his last full-time season.

“I’m so focused on the competition and the approach of just racing and going to the track with the mindset of ‘how do we make the car go faster? what do I need to do?’ that I’m not thinking about the sentimental side of it or that part of it. I really think the second half of the season when I start going to the tracks for the last time, I think that will start to sink in a little bit more. I’m very appreciative of the tracks and the interactions with the fans that I’ve had and a lot of the things they have done or said or shown me through signs and support already.”

It is unknown if Gordon will run any events next season, but if he does, he has stated it will have to be with HMS – the only team he has driven for since he made his Cup Series debut in 1992.

I’m kind of curious to see how JG does as a broadcaster. Obviously his bias towards the Hendrick team could become an issue esp. since he’s half owner of the 48 team. Is he going to plug Hendrick cars and their sponsors the way DW does with MWR and Toyota? Remember back when Joy, Waltrip and McReynolds were all doing compensated commercials for UPS (we want to race the truck era) Only in NASCAR would such shenanigans be allowed. Even our local ABC affiliate takes pains to announce they are part of ABC which is owned by Disney when promoting Disney on Ice and such.