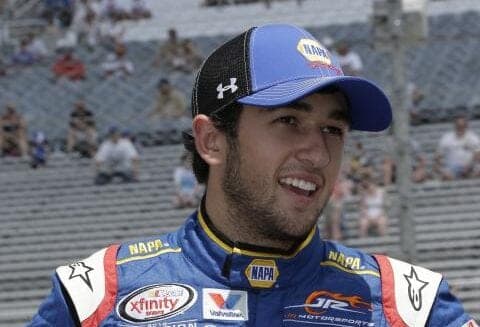 Your eyes dart to the leaderboard during the Lucas Oil 200 for the NASCAR Camping World Truck Series at Dover International Speedway and you see a somewhat familiar sight, if you’ve been following the sport long enough: the No. 97 and the last name Little.

No tricks here, though it’s not Chad Little you’re seeing in a NASCAR race for the first time in years. It’s his son, Jesse Little, who’s making his first start of his Truck Series career.

Barring he makes the field Friday (May 29), Little will drive the No. 97, becoming the latest in a string of offspring of former drivers testing their skills on the NASCAR national series level. Little’s father ran for many years in the Cup Series, most recently in 2002, with his most famous car and number the green and yellow No. 97 for Roush Racing sponsored by John Deere. He’s since gone on to a career in the NASCAR front offices, acting as the director of the Truck Series until this year, when he became the managing director of technical inspection and officiating for NASCAR.

Little is hardly the first to attempt to make his name first in the Truck Series following in the footsteps of a dad who once competed in Cup. In fact, he’s in supremely good company. Here are a few of the others who followed a similar trajectory as sons of former Cup drivers.

Of course the most successful example as of late is Chase Elliott, whose dad Bill was a Cup Series champion in 1989 and retired as a driver after 2012. Elliott first made his mark in NASCAR in 2013, running nine races as a 17-year-old and winning one at Canadian Tire Motorsport Park. He’s parlayed that success into a full-time ride in the Xfinity Series in JR Motorsports’ No. 9, winning the series title as a rookie in 2014. Starting in 2016, he’ll take over Jeff Gordon‘s famed No. 24 in the Sprint Cup Series.

This soon-to-be-full-time racer in the Truck Series is the son of Joe Nemechek, who still competes occasionally in NASCAR’s national series, with the brunt of his 2015 duties having been splitting the No. 8 Truck Series team with his son until he turns 18. Nemechek broke out in 2013 as well, running a pair of races for his dad’s team at season’s end. Last year, he raced 10 events, finishing inside the top 10 in six of them. See him alongside Little in the race this weekend.

Only barely so; Brad Keselowski‘s father Bob competed in just one Cup race in his career, nearly 21 years ago now: the 1994 UAW-GM Teamwork 500 at Pocono Raceway. Bob was more known as a full-time driver in the early days of the Truck Series. Whatever the qualifications, Keselowski first started a NASCAR national series event in 2004, driving eight races for the family team. He managed a best finish of 16th. Now he’s a Sprint Cup champion.

Former Daytona 500 champion Ward Burton returned to NASCAR for a brief (see: one-race) spell in 2012 when he started the Daytona Truck Series race because his son Jeb Burton was not approved to run the event. From there, it’s been all the younger Burton, who ran two full seasons in a truck and posted a single victory. Now he’s a rookie of the year competitor in Cup for BK Racing, though his first season has been marred by multiple DNQs.

Like Keselowski, a tough sell; Mike Dillon ran just one race in the Cup Series, and that was in 1998 for Richard Childress Racing replacing an injured Mike Skinner. The younger Dillon brother first appeared in the Truck Series in 2011, driving three races for RCR and finishing in the top 10 twice. He’s gone on to become a full-time NXS driver with the occasional Cup start that will certainly become a full-time ride in the future. Oh, and brother Austin? Ran an NXS race first.

You’ve hit on a tough subject for me. Buying a ride is becoming more prevalent in practically all forms of motorsport and I understand it but don’t particularly like it. Less prevalent in motorcycle racing where pure talent is still a premium. That’s why I like the Supercross season so much. In my opinion it is the purest form of motorsport left.