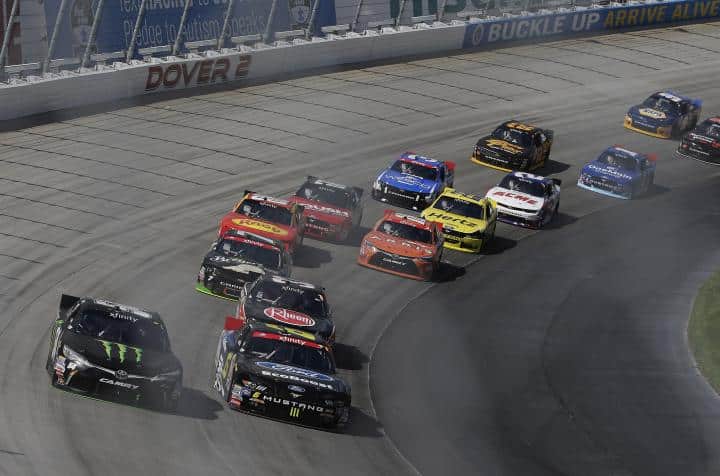 Chris Buescher versus Darrell Wallace Jr. It was the intra-team rivalry that left everyone buzzing after the closing laps at Dover, contact killing Wallace’s chance at a win while propelling Buescher and his No. 60 Ford straight into Victory Lane. Finally, at the end of a race NASCAR produced the series of fan-hooking events it seemed to have been missing since winter hibernation: anger, drama, fender-rubbing, frustration, hurt feelings, rivalry, storylines.

Except that component has already been there. It’s just that everyone hasn’t quite seen the details, an internal battle Wallace desperately wants to win with some very, very important people in his corner.

It’s an awkward reality for his employer, Roush Fenway Racing, these days as their Cup program has fallen on hard times. Greg Biffle, age 45, earned the only top-three finish there this season, using fuel to sneak into second at Charlotte last week. His two teammates, Trevor Bayne and Ricky Stenhouse Jr., are close 20-something friends that share a common on-track bond: racing themselves into potential unemployment. The game of Survivor may claim one of them by the end of this 2015 season; Stenhouse has earned just one top-10 finish while Bayne has not a single top 15.

It’s in this environment that RFR’s NXS program sits, quietly leading the championship standings with Buescher. Teammate Wallace, the first African-American to win at NASCAR’s highest levels since Wendell Scott over 50 years ago, has been in lockstep most of the way, missing just that signature victory on his resume. Both of them, kept afloat by Ford’s development money, are searching for a sponsor and a spotlight to audition for bigger roles. Add in former Cup veteran Elliott Sadler, running with the support of OneMain Financial, and you’ve got a trio RFR can pick from should there be an opening up above.

It’s a raw, more competitive environment than a team like Joe Gibbs Racing or JR Motorsports, where long-term contracts and limited openings make it clear where everyone stands. Buescher, one of the sport’s great young talents, needs to keep winning to justify Ford spending money. Wallace, with the support of outside superstars like LeBron James’s marketing unit, has the potential to bring in a whole block of new race fans – and top-level officials down in Daytona surely know it. Sadler, whose age means time is running out, took this job with a dream he’d earn one more chance at Cup glory. The stakes are high here in an “old school” NASCAR world where a top-tier driver’s future was once not perpetually guaranteed.

It’s with this backdrop that we set up the final few laps in Dover. RFR, recognizing their speed didn’t match some of the other top contenders down the stretch, chose to gamble on fuel with their two best drivers Saturday: Wallace and Buescher. Wallace had been the polesitter, in the top five all day, but Buescher, after early handling problems, had edged back to him as the laps counted down. One by one, contenders started pitting until suddenly these two were bumper-to-bumper for the lead.

Racing hard, the two went side-by-side into turn 3, neither willing to give while trying to nurse the gas pedal all at once. Saving fuel and fighting for first is an almost impossible task, requiring almost impossible focus. In the midst of it all, one of them was going to break.

“We were keeping a little quicker pace and when everyone is lifting halfway down the straightaway, it’s hard to start a pass, let alone finish it,” he said. “Felt like we were in position to make the pass a couple of times, with traffic and lapped cars and I got the door closed on us pretty hard on a couple of occasions. Just got underneath him there, we’re real late into a fuel run obviously and just got a little free on the bottom and didn’t have much air on the right side.”

The end result was no room on the left side for the fender on Wallace’s left-front tire. Forced to pit, he fell to 17th by race’s end and a golden opportunity was gone. A race on big FOX, during a Saturday where the sports world had a limited amount of news surrounding it, he knew a win here would have gotten more than just a few cursory glances.

“Third straw,” Wallace said, for his part after the race on the radio. “Gotta start making changes.” He then exclaimed he got “run over” to reporters, keeping the delicate balance of staying cool while sending a clear message.

“I would say I was happy Roush won, but I am not,” he said before escaping to the hauler and releasing the tweet below.

Team owner Jack Roush took a wait-and-see approach for both men, claiming he didn’t see the incident and was only just beginning to sort out its aftermath.

“A team owner has no worse horror,” he said. “Then to have two competitive programs in position to win a race, have one of them have contact with one another and have one of them not be able to finish in the position where he was otherwise entitled.”

In Buescher’s world, the contact opened the door for him to safely save fuel. It was coasting to the checkers the rest of the way, a half-lap victory over second-place Matt Kenseth that extended his point lead, has him standing out as the only NXS regular with multiple victories and left him sitting pretty for potential sponsors.

“We are always auditioning, I guess,” he explained when asked about the environment within the program. “We are trying to make a name for ourselves and run as well as possible. That is not going to change the fact that we are all racers. We are all out here trying to do what we can, we are just out here driving hard and we will see where that leads.”

For Buescher, it leads to more opportunities. For Wallace, it leaves him still scrapping for survival. That’s not the type of scenario that improves itself by Roush’s idea of “internal interviews.” On the outside, I expect political correctness to prevail; people in this sport can’t stand the thought of letting bad blood spill out.

On the inside? I’m not so sure this one is instantly correctable. For once, perhaps there will be permission for two NASCAR teammates to not play nice going forward and actually throw some fierce competition each other’s way.

Watching the race and I found the moves by CB unnecessary, proves to me he can’t pass clean, or doesn’t know how to. He looked like a damn freight train hell bent on what he wanted to do, eliminating Wallace. Jack did not look happy in V-lane, imo. Don’t blame him. Was wishing the guy would have run out of gas, would have made that time I invested in the race well worth it. That wasn’t a “racing deal”, imo. And another newbie without a clue, knowing how to eat some humble pie. My, oh my.

Thanks, Tom, it’s a wonderful article indeed. Finally XFINITY Series have a storyline to follow, i.e. situation within RFR camp. I think from the very beginning there was not much love shared between Buescher, Wallace and Sadler but Dover serves as the best example so far. On the Victory Lane Buescher didn’t express any remorse or concern for Bubba and I don’t know how Roush is going to address the problem of growing animosity (if there’s any) between his drivers and hopefully it has not gone too far yet.

Very interesting well written article. But perhaps this is an interesting comment on where the “sport” is. Could it be that Its not really about the racing anymore? Rather its about drivers, and their handlers, building a brand?
Just a thought.

At least the Roush drivers in the Xfinity were fighting for a win, unlike in Sprint Cup where the best they do is hope for the Lucky Dog.