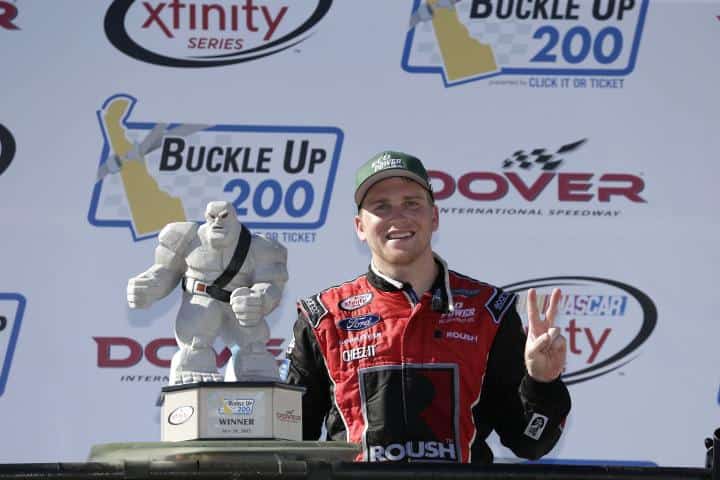 If there is one thing Miles the Monster wasn’t hungry for on Saturday afternoon, it was Chris Buescher’s fuel tank. Going 98 laps on one tank of gas, he stretched mileage long enough to take the checkered flag at Dover for his second victory of the 2015 Xfinity Series season – and in the last three races.

The Texas native started and finished the race alongside teammate Darrell Wallace Jr., as the two battled for the checkered flag at Dover International Speedway. Although the two rubbed fenders and battled for the lead in the Buckle Up 200, the hidden gem under Buescher’s snout was fuel.

“We saved quite a bit there at the end and that whole run really,” said Buescher who expands his point lead to 15 over Ty Dillon. “We were really trying to be easy on the throttle and then toward the end of the run, we started having to clutch it and really just let it coast at least half the straightaway which is really tough to do. I just felt like we’re going so slow and it’s hard to convince yourself to do it.”

That conservation came at a price, battling for the lead briefly causing Buescher to lose control in turn 3. After contact between himself and Wallace, it was Wallace who was then forced to pit road with a tire rub, later missing pit road entrance and receiving a penalty.

“I wish I could say I was happy Roush won, but I’m not,” Wallace said after the race, claiming he got “run over.”

“I just got underneath him there and we’re real late on a tire run and into a fuel run obviously,” said Buescher in response. “Just got a little free on the bottom and didn’t have much air on the right side.

“We’ll talk about it, we’re heading to the point we’re at the same place right now and we’ll get it all straightened out.”

Buescher has seen massive improvement thus far in 2015. Looking past the substantial victories, Buescher already has more top fives through 12 races this year than all of last year (six in 2015 to five in 2014), has more laps led (122 to last year’s 55) and his average finish is 7.5 compared to 13.0 at this time one year ago.

“It’s a result of a lot of hard work over the offseason,” Buescher said of the rise in strong results. “At the end of last year, we felt like we were making some really good headway. It’s been a smooth start to the beginning of the year. We’ve had a lot of races where we’ve been in the top 5 and been very competitive.”

As the fuel game started to take shape, Matt Kenseth had the race win escape after an off-sequence pit stop forced the Sprint Cup veteran to drive back on the lead lap and try to catch the conservation king of Buescher.

“Really thought we we’re in good shape, we had the lead and got our tires way earlier than everybody,” said Kenseth who finished second after leading 51 laps. “Then, we were making a ton of time on the leaders and I didn’t think anyone could run that long on fuel. Came up a little bit short, we had a really really fast racecar. We were able to show it most of the day.”

Finishing in the top five for the fifth time in 2015 was Regan Smith who, as a result of finishing ahead of Ty Dillon, Daniel Suarez and Wallace won the “Dash 4 Cash” $100,000 bonus, finishing third.

“I think we’re the only team now that can win all four of them and get the million dollar bonus if we do everything right,” said Smith who moved to fourth in the driver standings. “The way we’re running, I think we are more than capable of doing that.”

The most significant incident of the day occurred on lap 65 when Brian Scott and Ryan Blaney made contact heading into turn 1. The contact turned both into the outside wall with Scott having the worst of it, spinning back into traffic and getting struck hard by Jamie Dick.

“I just feel like [Blaney] didn’t give me any room,” said Scott who was checked and released from the infield care center as was Dick. “I feel like I went in there, he stuck right to my door and it just caused me to suck around.”

Dover’s pit road is arguably the toughest on the NASCAR circuit. Transitioning from the steep 24 degrees of turn 4 banking onto the flat pit-road entrance proved to be costly for some Xfinity Series rookies.

Suarez was nabbed for speeding late in the race and, as an insult to injury, was given a stop-and-go penalty for speeding again while serving the drive-through penalty. Wallace Jr. was forced to pit following the contact between himself and Buescher and missed pit road entry, leading to a blend-line infraction.

The most significant pit-road issue was for Jones, who qualified sixth and grabbed the top spot on lap 59. Although leading the most laps in the race, 70, the run for the win was finished when he locked up the front tires and sped. Jones was still able to finish ninth.

“I screwed up,” Jones stated. “Just trying a little bit too hard and just wanted to make sure we can get out ahead of everybody. We were so good today, I thought that’s what we needed. Just tough to get on pit road here, I should’ve practiced it.”

Clements grabbed his first top 10 of 2015 and eighth of his NXS career. CJ Faison finished 23rd in his series debut for Gregg Mixon.

The race was slowed four times, having seven lead changes among five drivers.

The Xfinity Series heads to Michigan International Speedway on June 13.

Some people see nothing wrong with it…”racing deal” etc. I dunno, my eyes saw something deliberate that DID NOT need to happen. It seemed very intentional, not once but twice. It takes skill to pass and not do what he did, I guess he doesn’t have the skill he thinks he has. Was actually hoping he would run out of gas. He also did not win any brownie points in my household (not that it matters..:) as there was no contrition or anything regarding those ill thought out moves. I don’t care what anybody says, Jack looked pissed and who can blame him, could have been a owners points one two punch. This is not the first time this guy did this. Hopefully a big lesson is coming his way. Hang in there Mr. Wallace….we don’t blame you one bit in our household.

…and Jamie Dick…maybe you need to rethink your lofty Xfinity goals…just saying.