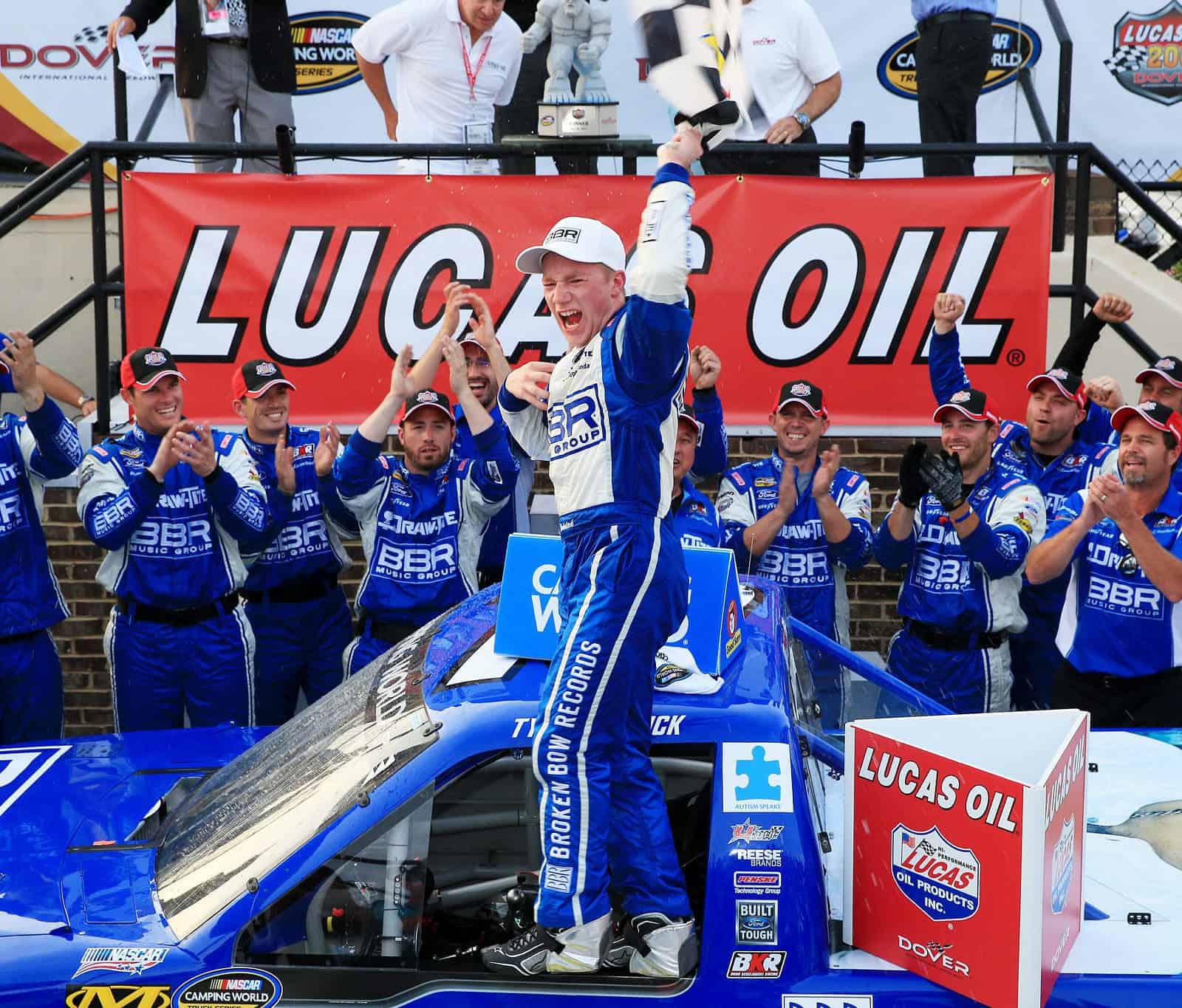 In a Nutshell: Tyler Reddick and Erik Jones waged a side-by-side battle while fighting lapped traffic, but it was Reddick who came out victorious Friday evening at Dover International Speedway. In a race that was marred by several wrecks and a lot of torn-up equipment, Jones and Reddick took two and four tires, respectively, on their final pit stops. The driver of the No. 19 prevailed in the final 58-lap dash to the finish, while Jones finished third behind teammate Daniel Suarez. Daniel Hemric and points leader Matt Crafton rounded out the top-five finishers.

Who Should Have Won: Reddick. On the final restart, Jones managed to pull away from the field to build a more than one-second advantage. But as the laps wore down, so did the lead the driver of the No. 4 Toyota had built. With just eight laps remaining, Reddick had trimmed the distance between himself and Jones to just a few truck lengths, surging past after a brief side-by-side battle for the top spot. The driver of the No. 19 Ford had solid speed all race long and put himself in position to win.

Just 15 laps into the Lucas Oil 200 Friday evening, tempers were already flaring as Jennifer Jo Cobb‘s Ford sat in pieces, wrecked hard against the inside wall. Due to the angle, replays in the television broadcast were inconclusive on exactly what happened; speculation was that Reddick either ran into Cobb’s truck and sent her spinning or he took just enough air off of the back end of her truck to get it loose.

As the field came back around to where her truck sat, Cobb walked up the track toward oncoming traffic and gestured at Reddick, all before safety workers even arrived at her truck. The next lap around, she did the same thing, this time held back by a NASCAR official.

Late last season, the sanctioning body issued a rule change that prohibited drivers from leaving their vehicles until the safety workers arrived for assistance, and the video shown to competitors before each race even reminds drivers and crew chiefs of that rule. Not too long after safety workers arrived to tow away her wrecked truck, Cobb was promptly called in for a discussion with NASCAR. Following a “stern meeting” with officials, the driver of the No. 10 called the walk on the track “a huge error in judgment on my part.”

“I completely forgot [the rule]. And the fact that I forgot is such a shame because the reason it is in place likely stems from a tragedy that none of us should forget,” Cobb said after her meeting with NASCAR officials. “We’ll see what happens. There’s repercussions, and I hope it didn’t make a bad day worse. It wasn’t that I knew and didn’t care. I forgot. In the moment you’re just like, ‘What just happened?’ I wasn’t thinking about any of that. I was just mad.”

NASCAR will most likely announce its decision on any penalties early next week, according to Truck Series director Elton Sawyer.

“We take safety very serious and discussed it with her. It’s a serious infraction,” Sawyer said. “She understands what she did, and there will be consequences.”

“We were lapped traffic early on in the race and Jennifer was trying to pass another vehicle and she looked like she was going to give me three-wide and then she closed the door so I whoa’d up to try and avoid from getting in the back of her,” he explained. “She just got loose when I was right behind her and she ended up spinning and tearing her vehicle up and being out of the race early. It’s just a real shame. I feel really bad for that happening to them and their team.”

But why was Cobb so upset? She stated after her meeting with NASCAR officials that “the reason for such anger is it’s so early in the race.”

“You can ask any spotter on the spotter’s stand how much courtesy I give these guys,” she said. “I didn’t pull out to pass [Norm Benning], which we were coming to lap, because I knew [Reddick] was out there and I gave him the high side and that is what makes me so mad.

“There are 32 trucks. I don’t care what anybody says, all 32 trucks matter. We run on a budget of about $300,000 a year. They run on a budget of $3 million a year. My truck is 10 times harder to drive than his truck. Despite all of that, our ultimate goal is to earn the respect of these guys. There are 99% of them that will tell you that we’ve done it.’’

While I do understand the anger from Cobb, simply put, walking out onto the racing surface – even under caution – is just not smart, nor is it safe. The rule NASCAR put in place last season is there for a reason, and despite the frustration, the driver of the No. 10 Ford should have handled it after the race’s conclusion. But with that said, I do hope the sanctioning body considers the situation when it comes to assessing penalties given the skeleton budget the team already operates on. A large fine would be just as damaging as – and potentially more than – losing one of her trucks.

Jesse Little began his Truck Series debut weekend with an impressive ninth-place qualifying effort, well ahead of the danger zone for failing to make the field. But that success was pretty short-lived once the green flag flew. After just 33 laps of competition, the driver of the No. 97 Toyota saw his day end before it ever really began. He got loose while racing inside Mason Mingus, slid up the track and sent the pair hard into the outside wall. Little’s truck then careened across the track and came to a rest against the inside wall, collecting a few other trucks along the way.

Following the incident, Mingus, who joined Billy Boat Motorsports late last season, was visibly frustrated to have his day end in a DNF for the second consecutive race and third this year.

“It looked like the [No.] 97 was driving over his head a little bit,” he said in the garage when asked about the incident. “This early in the race, [Little] shouldn’t put anyone in that situation. This is two weekends in a row that we got wrecked by people we weren’t racing against.”

Meanwhile, Little demonstrated his maturity at the age of 18 with an assessment of what happened between the two, though he didn’t outright accept the blame or offer an apology to Mingus and the No. 15 team.

“I just forced an issue that I shouldn’t have. I was driving up underneath the [No.] 15 (Mingus) and I knew the truck was really sensitive to aero, but I didn’t know it was that much,” he explained. “I just got loose and it brought me right around. There’s not much you can do after that.

“I just hate it for everybody. This is exactly what I was trying not to do, and it’s something that sets us back. But I learned and that’s what it’s all about. We’ll go get them next time.”

Admitting you’ve made a mistake is hard enough, but doing it on national television for all of the NASCAR audience to see is a great indication of how a driver will conduct himself in the future. And while he was upset about having his debut race end before it even got to the one-quarter mark, Little is approaching the wreck with the right attitude and using it as a learning experience. If he can maintain that outlook throughout his NASCAR career, it will definitely be easier to gain respect from his fellow competitors.

Points Update: Crafton maintained the point lead on the strength of a fifth-place finish, but race winner Reddick moved up one position to second and now sits just 11 markers behind. Erik Jones dropped a spot to third, just three points behind Reddick. Johnny Sauter and Townley round out the top five.

Timothy Peters remains sixth, just three points outside the top five but 74 behind Crafton. The remainder of the top 10 is made up of all rookies. Hayley and Gallagher, who moved up one spot, are tied for seventh. Hemric and Black Jr. each moved forward one position and round out the top 10.

Wow! What a team effort today by @TeamBKR at the #LucasOil200 @NASCAR_Trucks We conquered Mile's the Monster!!

Thanks to all for your support!! We are getting closer to the ?, can't thank enough to @KBMteam for the hard work and fast truck! #NASCAR

Great amount of support tonight fr other teams/spotters which means we have earned a lot of respect over the… http://t.co/HtFWdK1Quc

Win as a team and lose as a team. Brought a really fast truck, we'll move on to the next one even better.

Up Next: The Camping World Truck Series heads to Texas Motor Speedway next Friday night. Last season, Crafton dominated, leading 118 of 167 laps en route to a more than 13-second victory over Justin Lofton. Coverage for the WinStar World Casino 400k begins at 8:30 p.m. ET on FOX Sports 1; the race can also be heard on your local MRN affiliate.

You would think that, six races into the season, and Fords have won three of them, somehow Ford would get the hint that they are still relevant in the Truck series. What is it going to take for the factory to step in and give Brad Keselowski Racing (or is it Penske Racing’s truck series program?) some factory help? Bet if Ford did that, maybe Reddick could pull off the championship. Wouldn’t that rot Toyota’s socks off!

Damn, if I knew this event wasn’t just another Cupped up mess I would have watched it!