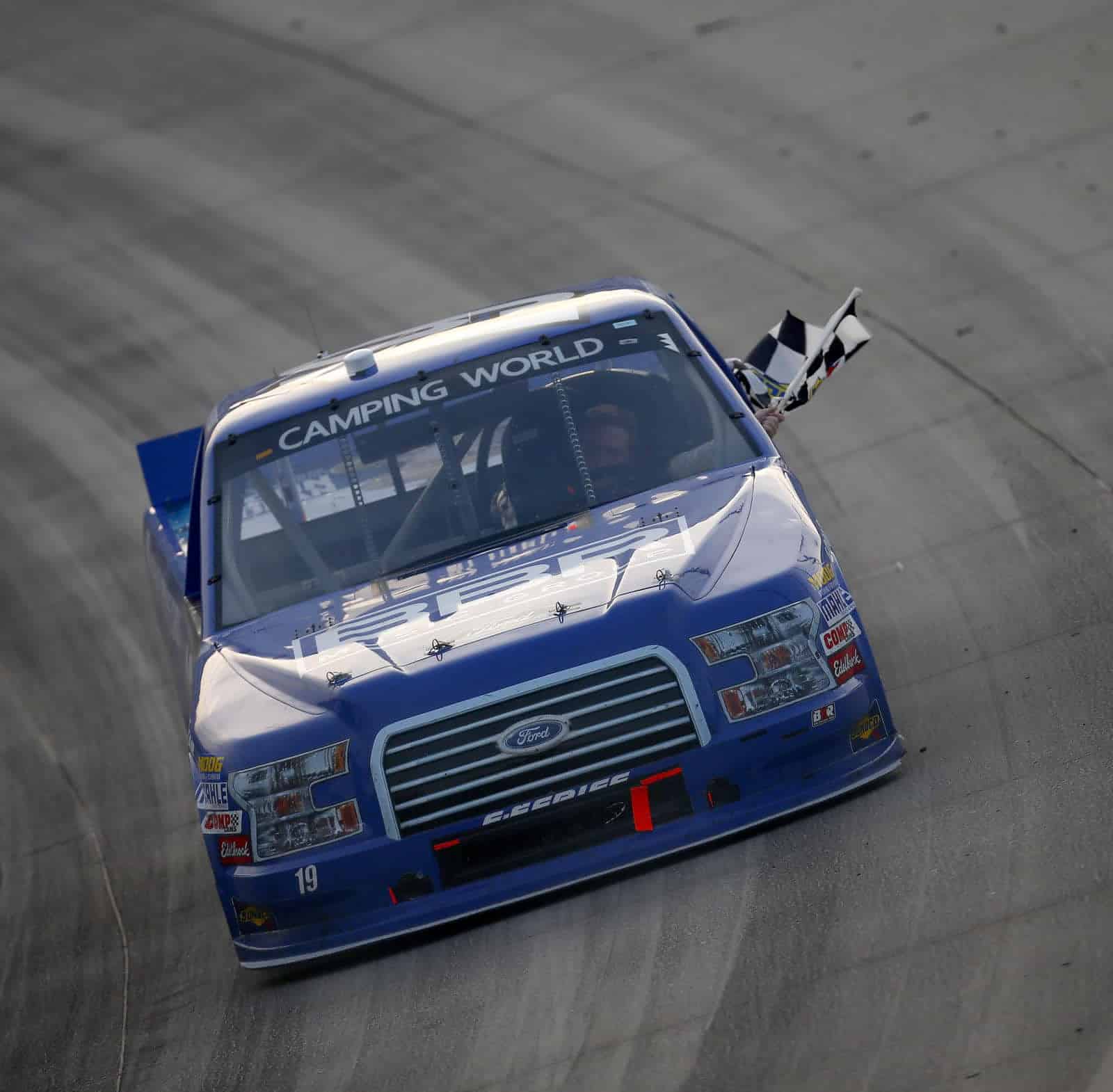 Tyler Reddick did not flinch when he went toe-to-toe with the Monster Mile in the closing laps of Friday’s Lucas Oil 200 at Dover International Speedway.

On a day filled with destroyed fenders, bent tempers and gigantic blunders, Reddick tracked down Erik Jones with eight laps to go to grab his second career Camping World Truck Series victory and first at Dover.

“I knew we had top-five truck starting the race and we just ended up being in position to put our Brad Keselowski Racing Ford F-150 in Victory Lane,” said 19-year-old Reddick in his post-race press conference. “It’s great to get a win for everybody back home and it’s a good way to get the season going for us.”

Winning the season-opener at Daytona and now Dover, Reddick can now put two vastly different track on his wins list.

“As the team we wanted to prove that we can win at any given race track and we’ve now won at Daytona, Martinsville (with driver Joey Logano) and Dover,” Reddick said. “All very different monsters in their own sense and that’s a perfect way to start the year.”

Although leading 50 laps – the second most behind Cole Custer’s 67 – Jones fell victim to Reddick’s pace and lost the lead with eight laps remaining.

“The thing just got so loose, I couldn’t hang on to it,” said Jones who finished third, losing out on another close Truck win. “We’ll take it, we’ll move on and we’ll just keep getting better.”

Jones believed having mentor Kyle Busch on the radio for the 200-lap race “helped him a lot.”

“To have [Busch] on the radio this weekend with us and coaching me along was pretty big,” Jones said. “Especially today with some of the struggles we were having early in the race – falling back, trying to come through the field, managing our tires. It helped me a lot today honestly.”

Daniel Suarez was able to leap Jones in the final laps to steal second place. The Mexican-born driver also placed second in the Xfinity Series event at Bristol Motor Speedway – a shorter but similar concrete, high-banked oval – in March.

“It’s maybe something about the concrete, I really like it,” said Suarez, getting his fifth top 10 of 2015. “I like the grip, it’s something I really do like. But something important as well, I had the opportunity to race here twice in the NASCAR K&N Pro Series East and as well at Bristol, I think three times.

“I feel like to know the racetrack is something very important.”

Race-winner Reddick had some drama early as he tangled with the No. 10 truck of Jennifer Jo Cobb on lap 15. The damage to Reddick was insignificant as Cobb, however, nosed into the inside wall and made her frustration known by approaching him under caution. Cobb was sentenced to the NASCAR hauler and Reddick continued.

Elton Sawyer, Managing Director of the Camping World Truck Series, called Cobb’s actions “a serious infraction” and said that consequences will be met.

The heated crash led the way for a rash of cautions varying from solo spins to multi-truck collisions.

Jesse Little, in his first Truck Series event, made contact with Mason Mingus and spun into the backstretch wall. John Wes Townley, Brandon Brown and Justin Jennings were also collected.

Daniel Hemric finished fourth in his first-career top-five finish followed by Matt Crafton in fifth. Crafton had to drive through the field following a pit-road speeding violation during the final stop of the race.

The race was slowed for eight times and had 15 lead changes among eight drivers. Crafton leads Reddick by 11 markers as the series heads to Texas Motor Speedway on June 5.

Six races into the season, with three won by a Ford. Brad Keselowski Racing (or is it Penske Racing’s truck series program?) has a winning formula for their Ford trucks. It isn’t so much that Reddick is making a statement, but more about a question that should be shouted at the manufacturer: For crying out loud, Ford, what is it going to take for you to get off your duff and start giving these guys more support? They have as many wins as Toyota and Chevrolet combined, and the number one Ford driver is in the thick of the championship battle. HELP THEM OUT! PLEASE!